I have done several previous posts about Southern Pacific passenger cars, as you can see from this being the ninth in the series, and there are even more if you include the ones about specific trains such as the “Coast Mail,” along with a kind of sub-series on SP sleeping cars, that included five posts. Lastly, there was a three-part series on making various heavyweight sleepers by modifying AHM cars  (you can find any of those prior posts by using “SP passenger cars” as the search term in the search box at right).
My present post is about head-end cars, and accordingly follows on the Part 2 post, which began discussion of those kinds of cars (you can read the Part 2 post at this link: https://modelingthesp.blogspot.com/2012/10/modeling-sp-passenger-cars-head-end-cars.html ). Then the most recent post in the series that treats head-end cars is the preceding post (see it at: https://modelingthesp.blogspot.com/2018/04/modeling-sp-passenger-cars-part-8-more.html ).
I have acquired a couple more of the old Ken Kidder brass 60-foot baggage cars, and am gradually getting them fitted up for layout service. As I pointed out in previous posts. the Kidder roof meets the car side at an angle, rather than curving to be tangent to the side, but this isn’t evident in a passing train. Likewise, the Kidder roof vent arrangements are at best unusual for SP “Harriman” cars (I have been told they are accurate for several Illinois Central cars), but again, what matters in a passing train is that there are roof vents, not the exact arrangement (at least for those other than passenger modelers, of course).
Shown below is the kind of underbody additions that I have applied to some of the Kidder baggage cars, with a battery box on one side, brake gear on the other side, with a reservoir. The lighting makes it look like it is a light color, but is actually dark gray. And yes, those are Central Valley trucks, of which I wish I had more.

The photo below shows another of the cars being completed, SP 6206, in this case using Athearn 4-wheel trucks. I have experimented with a more faded green, both because some SP cars had that look, and in respect of indoor lighting. The full prototype color, Dark Olive Green, looks very dark indeed in indoor lighting and I have used it only for a few cars, to suggest recent repainting. The car below has been weathered, though I note that the trucks need some more grime. 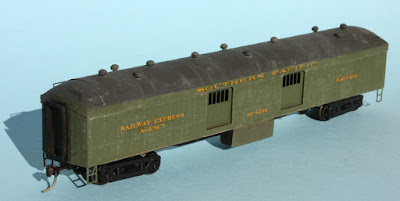 In most operating sessions, I do include a passenger extra, or a section of the “Coast Mail,” as suits the timetable. For this, I usually choose a Class P-4 Pacific, since the train is not very big. An example is shown below at Shumala. This particular train is mostly baggage cars, with an express box car (AAR Class BX) on the head end, an RPO car behind the baggage cars, and a dead-head sleeper on the rear. The express box car is from a Sunshine kit. 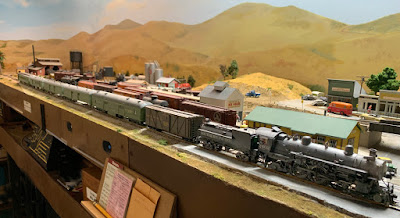 Passenger operation is not a very important focus for my layout, but I do like to include this much of a passenger train presence. And it’s enjoyable to provide this kind of a variation in what is otherwise mostly freight car modeling!
Tony Thompson
Posted by Tony Thompson at 1:06 PM