In the first post in this series, I described how ice was moved on the decks that were used for icing refrigerator cars in the prototype, and showed what the various systems for moving ice looked like (you can read that post at the following link: https://modelingthesp.blogspot.com/2019/08/handling-ice-on-ice-decks.html ).
I followed that introduction with two posts about prototype icing and ice decks, emphasizing the part I know best, Pacific Fruit Express, but relating also to other companies around the United States. The first of those two posts was about the making and handling of the ice (that one can be found here: https://modelingthesp.blogspot.com/2019/08/handling-ice-part-2-ice-itself.html ), and the second of the two was about how icing was done, the tools used and the standards for ice size, etc. (that post is at this link: https://modelingthesp.blogspot.com/2019/08/handling-ice-on-ice-decks-part-3-icing.html ).
In the fourth post, I showed how I built the small ice deck on my layout, a typical deck of a local ice company, and showed it in its state before adding any capability for moving ice other than on the plain wood deck (that post is at: https://modelingthesp.blogspot.com/2019/08/handling-ice-on-ice-decks-part-4.html ). The real goal, of course, was to improve that deck for ice movement, as hinted in the first post of the series (cited in the first paragraph of the present post).
Before going farther, I should mention that I have had an inquiry in a separate email, from a questioner who wanted to know if I could supply more information about icing as it was practiced on the prototype. I suggested that he might like to go back and read a post I made quite awhile ago, quoting part of my interview with Pete Holst, retired Car Service manager for PFE, and I think it does provide a lot of insight. The post can be found here: https://modelingthesp.blogspot.com/2012/09/pfe-operations-from-pete-holst.html .
Back to modeling of my icing facility. My choice to facilitate easier ice movement on this deck was to add a sheet-steel runner, with a raised back edge to act as a guide for ice blocks, as they are pushed or pulled along the runner by a workman. I chose to make this using a styrene strip, 12 scale inches wide, with a scale 1 x6 -inch strip glued vertically along one edge. The length I chose was simply most of the ice deck.
Now to paint the runner. I began with a good base color for steel in the open, namely the Tamiya TS-38, "Gun Metal,” in a rattle can, The first time you use this, you will probably cry out "Aaack!’ upon viewing what you painted, because it’s a dark brown-bronze kind of color with a purplish overtone and little sparkles everywhere, and it’s glossy. But a coat of flat kills both the gloss and the sparklies. Here is how it looks at this point.

You’ll notice that at the left end, the outermost part of the runner, I angled the backing strip a bit toward the front.
My next idea was to add a little rust — after all, this thing gets wet all the time — but more importantly, the 300-pound ice blocks sliding along it will result in shiny, silvery areas along much of the length, as they polish off rust and any old oxide.
I added the silver color by dry-brushing. This used to be a standard modeler’s technique, but now seems out of fashion. All it is, is to wet a brush with the paint being used, and brush out most of the paint onto a piece of card or other handy waste, leaving just barely any paint on the brush. Now when that brush is applied to the model being painted, only a slight highlight is added. Obviously one experiments to apply the optimum amount for any particular painting project.
Here is a view of the completed runner, just resting on the ice deck at this point. I placed a few ice blocks on the deck to illustrate. 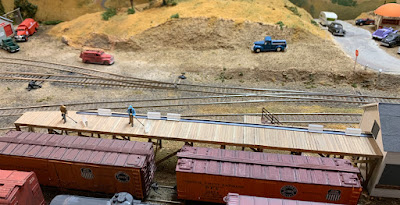 This is about the right length and size for what I wanted on this runner.
The view above may not clearly show where I placed the runner on the deck. For that information, the overhead view below should suffice.

My ice deck scene is still not complete. I need to add a few more details, as I will relate in a following post. I should emphasize that I am not trying to model active icing, only a crew on the deck getting ready to ice cars.Most of the time in any operating session, that is the right posture for the deck crew to have, so I have modeled it that way.
Tony Thompson