Comments on modeling the Fifties

I was stimulated to think about my approach to modeling the 1950s recently when I received an email from a modeler I know slightly, asking for advice on how to go about modeling the transition era. He is not old enough to remember it himself, and has liked some of the 1950s layouts he has seen, so wondered what I would advise. He does want to capture the “look and feel” as well as he can, and hoped I could recommend resources.
To some extent, this same question could be posed for any decade of interest: what are the resources you need to model accurately? As I have just hinted, this will depend to some extent on how serious you are. Plenty of what I suppose could be called “modern modelers” seem content to include locomotives and rolling stock typical of the 1970s to the 2010s, all in one layout. But let’s imagine that you are serious. I will illustrate for the 1950s, though I think principles here are broad.
My first comment to my correspondent is that there are at least two excellent publications out there that focus on the 1950s. I will start with what I still believe to be the best of these, a Special Issue of Model Railroader from 2011 (and like all the first four Kalmbach publications mentioned in the present post, still available for purchase on-line at Kalmbach; I just checked). 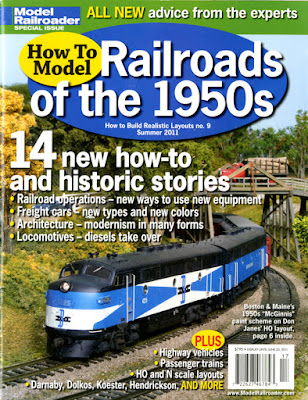 It covers not just rolling stock, but structures, vehicles, and even operations. I cannot praise it too highly for anyone wishing insights into the 1950s.
What I would call the “other best” publication on this topic, Modeling the ’50s, subtitled “The Glory Years of Rail,” is also from Kalmbach, and packed with excellent material. 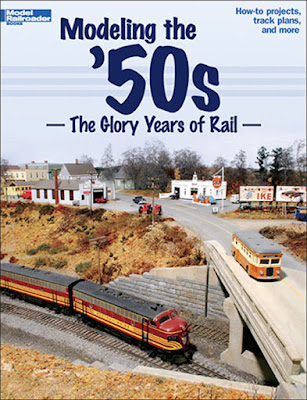 There are two additional publications I would mention on this topic,more narrowly focused but still very fine, both from Kalmbach. The first I would mention is a typically good Tony Koester book, Modeling the Transition Era, focused more on rolling stock, but well illustrated and quite complete. (I am not an entirely neutral commentator here, as I contributed some of the photos in the book). 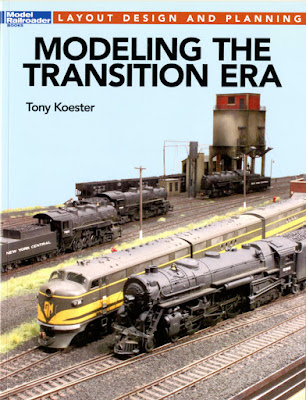 Last of these four titles is what to me is an important aspect of model railroading, freight cars, has been very skillfully and surprisingly completely covered by Jeff Wilson’s book, Freight Cars of the ’40s and ’50s, published in 2015. 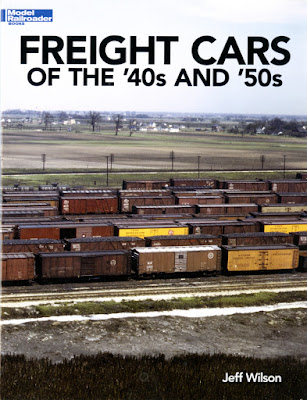 Another excellent source, though not restricted to the 1950s, is the Jeff Wilson series of “industry” books published by Kalmbach. I showed the covers of all four in a prior post, and mentioned a little of what is in them. This is a very useful set of snapshots of how industries worked (see my post at this link:  https://modelingthesp.blogspot.com/2018/01/handout-for-traffic-talk.html ). These are the only publications mentioned in this post that are not all in print, but any not in print at Kalmbach are readily purchased from used book dealers on line.
That “industry” series is now being supplemented from Kalmbach with separate full books on some industries, such as coal, livestock, produce and so on. You will recognize these easily on their book sales website at: https://kalmbachhobbystore.com/catalog/books .
Finally,  I want to mention a Kalmbach publication I have recommended before, but will mention it again because it addresses another aspect of model railroading that I find vital to the hobby, operation. Now there are lots of books on operation, but as an introduction, I find this Special Issue of Model Railroader, entitled How to Operate Your Model Railroad, to be without peer. If you are new to this topic and would like to learn about it painlessly, you should try this title. 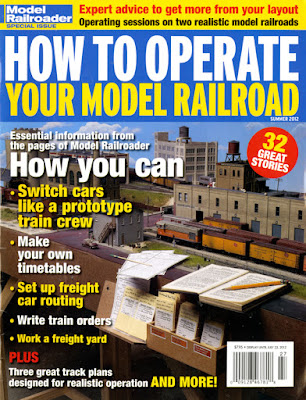 These are all titles I recommended to my correspondent, and he seemed pleased to be directed to some sources he could absorb at his own pace. You may wish to do the same.
Tony Thompson