For a number of years, the modelers in Vancouver, British Columbia, have hosted an operating weekend in alternate years. If I’m counting correctly, this year was the seventh in this series. I attended, as I have previously, and as always, tremendously enjoyed a well-run meeting with terrific layous. This year, the group returned to the nice Accent Inn in Burnaby, not used in 2017 but familiar from prior years. 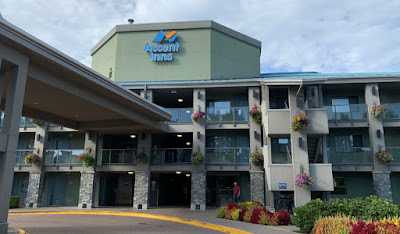 Among the most ambitious and impressive layouts I know of in the Vancouver area is Scott Calvert’s Boundary Subdivision of the Canadian Pacific. As was the case two years ago, I worked one end of the big yard at Nelson, under the able yardmastering of Travers Stavac (it was pointed out that with Canada going metric, this job will eventually be retitled as the Metermaster). Right above the yard was the new second level, and we enjoyed seeing a train up there, one of the first to run on this very recent trackage. You can see the excellent rockwork and part of a snowshed, though scenery is clearly in its early stages. 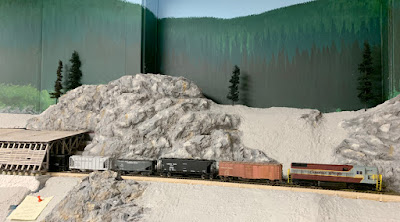 Scott also hosted a very pleasant social evening on the Friday of the meeting. Thanks, Scott!
My second layout was the Pacific Great Eastern of Doug Hicks. This is a remarkable layout in the amount of trackage that Doug was able to include in a modest-sized room, and the trackage all ran well, too. The scenery was nearly complete and quite nice, and that made it enjoyable to view and to operate. I ran the North Vancouver yard, compact and busy enough to be a challenge at times, but operating flawlessly. Here’s a view looking toward the rest of the layout (the relatively few cars that are visible show why I had enough time to take a photo). 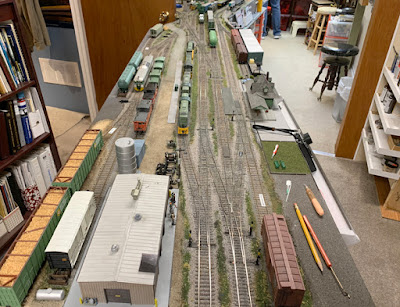 Doug has made an interesting solution to knowing how a slip switch is lined, by adding LED lights that illuminate the chosen tracks. I totally relied on this in working the yard!
On Sunday I had he privilege of operating on Mike Chandler’s Western Midland layout, set in 1938. Though work remains in some areas, the scenery is outstanding and so was the quality of operation. I had the fun of running several different way freights, with lots of very nice switching.
One feature I liked, and it’s one you rarely see, is that the whole fascia was used as a kind of control panel. Below is part of the fascia at Black Mountain. The color-coded circles at mid photo, and corresponding plugs at the fascia bottom, are for DC operation, something Mike rarely does. 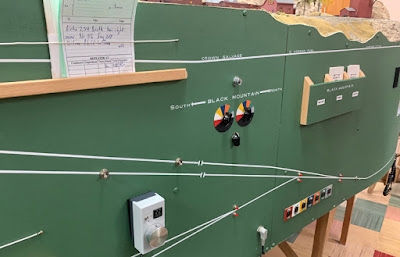 The white lines are essentially a 1:1 track diagram, making it easy to find the pushbuttons for track switches, and there are handy racks for paperwork (in use at the top of the photo). Boxes at right are for waybills, and you can see a hand-held throttle attached to Velcro at the left bottom. Nicely thought out.
The scenery, as I said, is very impressive. Below is the summit of the railroad’s mountain crossing, at Lofty, with a wye that you can see, along with a stamp mill for a mining operation. Fun to switch as well as very attractive. 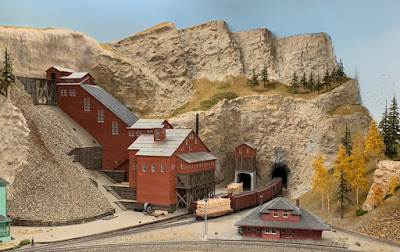 I really enjoyed all three of these layouts, as you can probably tell. Even so, at most of these weekends, one has the experience of hearing multiple people rave about one of the layouts, inevitably one that you did not get assigned to. I just patiently make notes, so I will know to request that layout next time! Thanks again to the Vancouver crew, who put on a terrific event.
Tony Thompson
Posted by Tony Thompson at 12:10 PM