I have posted several descriptions of military vehicle loads in recent posts, primarily intended for the heavy-duty Army flat car modeled by Roco and which I upgraded for use on my layout. The most recent of those loads were half-tracks, described in this post: https://modelingthesp.blogspot.com/2019/05/roco-flat-car-part-6-more-about-half.html . But of course the heavy-duty Army flat car (of 100-ton capacity) was intended for much heavier loads than half-tracks.
The most common load that one thinks of in mentioning armored vehicles is a tank. My modeling year is 1953, and although by that time the Sherman tank, mainstay of World War II, was all but officially obsolete, it had been used to some extent in the Korean War, only just ended in 1953 (the armistice was signed in July), and was definitely still in use for training purposes in the United States.
There have been HO scale models of the Sherman tank available for some years. From a model railroading perspective, these can be flat car loads. One can find a variety of photos of Shermans loaded on flat cars, and they are of interest if one wants to model them so loaded.
Here is one example, a Signal Corps photo taken in the U.S. of a Sherman ready for shipment. It is loaded on an Illinois Central flat car with overhanging deck, that is, with a deck which extends out to the outer face of the stake pockets. This car, IC 60636, was a 50-ton flat car,  adequate for the various Sherman variants, which ranged in weight from 34 to 41 tons (most Shermans were in the lower part of that range). But notice that only one tank could be carried on such a flat car. Also note, incidentally, the complete lack of visible lettering on this tank. It may have been used in maneuvers. 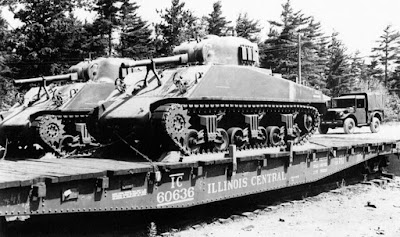 Careful examination shows that there is a minimal chock under the front and rear of the tank treads, and a heavy timber (actually two stacked timbers) alongside the tank (probably spiked into the deck). There is a pair of steel rods from the towing hook under the glacis, to a stake pocket on each side, but this is nearly invisible even in this view, and it could be omitted in HO scale.
This degree of blocking of the vehicle may seem rather inadequate, but was not untypical of how tracked vehicles were shipped on flat cars. Shown below is a Richard Steinheimer photo, used with permission, taken of course to show SP Trainmaster 4801 powering commute train 114 on the San Francisco Peninsula, but from the photographer’s vantage atop a lumber load, we also see a couple of heavy Caterpillar bulldozers dominating the foreground, and the blocking applied to their treads. 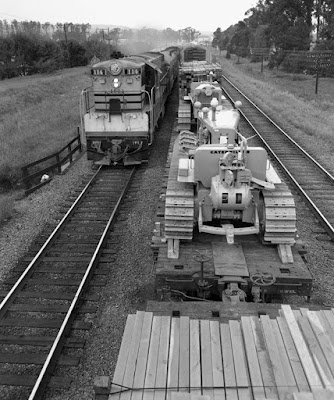 I have taken a similar approach, with chocks at each end of the tank treads and a scale 6 x 6-inch timber alongside. The model tank is a Roco Sherman, and the lettering is from Microscale set MC-4279. On a 50-ton flat car like this Union Pacific car (built from a Westrail kit), this would be a single-vehicle load, as already mentioned in connection with the IC flat car above. It’s shown on my layout. 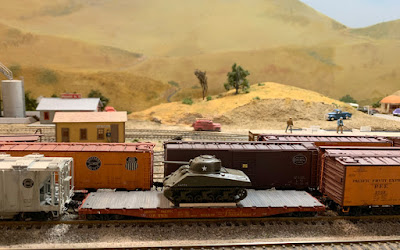 This kind of armor load is credible on my layout, with a destination of Camp Roberts, home of the 7th Armored Division in 1953 and an armor-training facility during the Korean War, located just north of San Miguel, California, right on the SP Coast Line, railroad west from the locale of my layout.
A tank like this is of course an even more appropriate load for the Roco Army flat car. That heavy-duty flat car was intended to carry two vehicles of the weight range of a Sherman tank. I will return to armor loads for the Roco flat car in a following post.
Tony Thompson