Most of us are familiar with the fragility of styrene sill steps on freight cars, and even when tougher engineering plastics are used for these parts, they simply are not really durable. Now, a person who builds models for a display case, or who only operates his layout himself, may not break very many of these steps, but a layout that has various populations of visiting operators from time to time will certainly break a fair number.
Before saying more, I should credit my late friend Richard Hendrickson, who insisted that the first thing one should do with a “ready-to-run” (RTR) freight car — which he always referred to as “ready-to-finish” — was to slice off those fragile sill steps, and replace with sturdy metal, such as A-Line bronze steps. So in this context, when I say “fix” the steps, I really mean “replace.”
Alas, I am not so meticulous or rigorous as was Richard, and I must confess that often I have put new RTR freight cars into service (after weathering, which was Richard’s second step). It’s only occasionally that I take the trouble to replace sill steps before operating a car.
But naturally in due time, in the course of multiple operating sessions, the original sill steps do break. On the prototype, a missing sill step would be immediate cause to direct a car to the repair track, but I may wait until two or more steps are missing before sending the car to the workbench.
Once there, cars may accumulate until I am in that “fix the darn steps!” mood, and then I undertake a whole batch of cars with the same repair need. I’ve described my technique in this blog previously, but will repeat part of it here, while showing another feature of my approach.
Because I find I don’t have the accurate drilling ability to drill into and parallel to the car side, thus locating new steps right where the old ones were, I begin instead by gluing styrene blocks behind the sill to serve as backing. I usually use HO-scale 4 x 4-inch styrene for this, cut to fit the length of the new sill step. Here is how it may look at this stage. 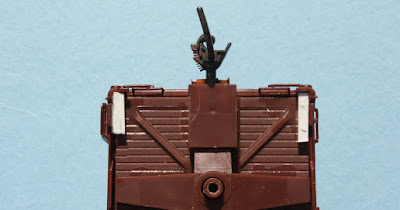 Then I drill into the styrene block, or between the block and the car side, with an appropriate-size drill in a pin vise. For most freight cars, this drilled hole will reach all the way into the car interior, which is helpful for steps with long attachment pins. Usually I then put a little CA onto the step and slide into the holes, or, if not confident of the smoothness of installation, I install the steps, then add a drop of CA at the surface, to wick into the hole and complete the joint.
For the car you saw in the photo above, I decided to use some of my stash of Tuttle Industries sill steps, a marvelous product that unfortunately did not survive long in the market. These are so-called “Style B” steps, meaning the leg toward the car center is angled. This is written on the package label. 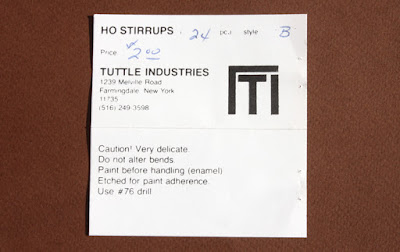 These have a great looking cross-section and nice, sharp corners, unlike A-Line steps, though I will admit that when painted a dark color, such as boxcar red or Pullman green, details like corner shape are hard to appreciate. But on some cars, I do like to use the better steps. Here are two of the Tuttle steps, just having been inserted into the styrene blocks as described above.

The completed car, with steps unpainted so they will show up better, looks like this (it’s a Proto2000 model, quite close to the Southern Pacific’s Class A-50-14). You may wish to enlarge the image by clicking on it.

I don’t wish to give the impression I don’t like or don’t use A-Line steps. I certainly do, by the dozen. Here is just one recent example, again unpainted, on a PFE express car. It’s an InterMountain model, with trucks modified to represent the Chrysler trucks used on 25 of these conversions of Class R-40-10 reefers (for more, see my post about creating these trucks: https://modelingthesp.blogspot.com/2016/02/pfe-40-foot-express-cars-part-2-trucks.html ).

As I see it, this kind of step replacement (really, step upgrade) is a necessary part of maintaining the layout car fleet. Occasional damage such as the loss of a sill step, is a small negative, when measured against the fun of operating sessions, and in any event, the resulting repairs are not difficult.
Tony Thompson
Posted by Tony Thompson at 9:57 AM