In the previous post on this topic (see: http://modelingthesp.blogspot.com/2016/02/pfes-40-foot-express-reefers.html ), I provided background on the prototype for the Pacific Fruit Express 40-foot steel ice reefers converted for express service. Prototype photos were included to show both the paint and lettering appearance, and also the two distinctive types of trucks applied to these cars. In the present post, I will address modeling, with the InterMountain kit for which the box end was shown in the previous post.
This kit is straightforward, and required no noteworthy modeling skills, but I did make a few changes. My kit came with no car weights, so I added my usual two ounces in the form of two 5/8-inch steel nuts. I have said more about this weight application in prior posts (for example, see this one: http://modelingthesp.blogspot.com/2013/06/pfes-western-pacific-cars.html ). I also drilled and tapped the truck bosses for 2-56 screws, and likewise modified the kit coupler boxes by cutting off the post in the lid, then drilling it for 2-56, and also tapping the hole in the body box for 2-56. This makes the coupler box entirely accessible for maintenance with a screw cover.
This kit was provided with the dummy fan plate part that was shown in the first post about these cars. As I measured it, the hole to fit the InterMountain part into the car side requires a no. 33 drill. This  complements the fan control box (also provided in the kit, though not yet installed in the photo below) which goes at the side sill. The inserted dummy plate looks like this:

The model here is supported on interim truck blocks pending addition of trucks, an approach I described in an earlier post (you can view it at: http://modelingthesp.blogspot.com/2014/11/interim-truck-support-blocks.html ). Side details are not yet added, as I wanted to take care of drilling the car side before anything delicate was in the vicinity.
Incidentally, I did get a question about the dummy fan plate (“what the heck is that?”), and the answer is that the earliest car fans on PFE cars were mechanical fans, and they had a fan shaft visible on the car side, which could be used to operate the fans when they were stationary at a loading dock. Switchmen and others had learned to look in that location for the round shaft housing to identify fan cars, so when electric fans were introduced, needing no fan shaft, the dummy plates were put on such cars as an indication to workers that the car did have fans. It was simply a pressed sheet metal plate.
But the trucks are the major challenge to model for any of the first 25 cars in this group, PFE 901–925, because of the Chrysler trucks, which I showed in the previous post about these cars (link at top of this post). I have long postponed trying to duplicate the Chrysler truck shock absorber (one thought was that I might try one of the shock absorbers used on some diesel locomotive sideframes). But at this year’s Cocoa Beach, Florida meeting, Ross Dando had some exquisite resin castings of a complete spring package and shock absorber for these trucks. He was kind enough to give me a few of these castings. Here is a photo.

A set of these can be purchased from Twin Star Cars (you can visit them at: http://www.twinstarcars.com/ ) for $5.00 plus shipping, though these parts are not currently on the website. You will need to contact Twin Star directly to order.
To install these, one simply needs to carve and file off the protruding parts of the spring package on a conventional AAR sideframe. I used the InterMountain trucks in my car kit. The X-acto chisel blade was used to slice off most of the spring package: 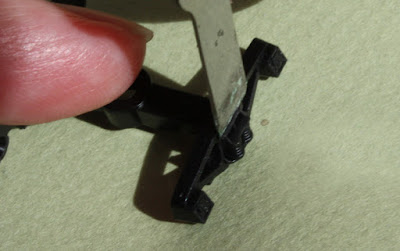 Then when the spring area was filed flush with the rest of the sideframe, it looked like this.

I sanded down the spring castings from the back so they would sit better. I used canopy glue to attach the new spring package, which is easy to see below because it is a light gray color. It may seem at first glance that the shock absorber package sticks out quite a bit, even when thinned, but if you look at the prototype photo in the prior post (see the link at the top of the present post), you will see that the prototype package also protruded quite a bit.

I will show the painted trucks when they are on the completed model.
Most of the remaining work on this kit is simply a matter of adding details. I will show the car in finished form in a following post.
Tony Thompson
Posted by Tony Thompson at 9:20 AM