My column in the February MRH

The latest of my “Getting Real” columns in MRH (Model Railroad Hobbyist), which has just appeared in the February 2016 issue, is about tank cars. It describes their prototype design, construction and use up through the 1950s. (A “second section” of the column, expected next month, will address modeling.) As with all issues of MRH, you can download it at any time for free from their website, which is: www.mrhmag.com .
Putting this column together was an interesting exercise, because it took me back to the time, 30 or so years ago, when my good friend Larry Kline and I dreamed up the clinic topic of “Tank Car Basics,” because we recognized that many modelers had only the most fuzzy understanding of how a tank car is constructed, and how and why it is used for particular cargoes. Larry and I used to like to visit tank car loading or unloading sites whenever en route to a convention or other railroad activity. At one of those stops, C.J. Riley, the third member of the Iron City Ferroequinological Society (ICFS) took this photo. That’s Larry on the left, me on the right. 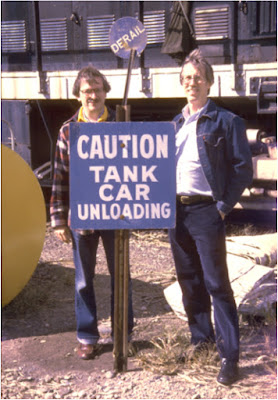 I have commented before about ICFS and our activities; see for example this post: http://modelingthesp.blogspot.com/2013/07/that-red-icfs-truck.html . In my memorial to Larry, who passed away in March 2014, I included this same photo as a good memento of us together (you can read it at this link: http://modelingthesp.blogspot.com/2014/04/in-memoriam-larry-kline.html ).
When we first combined our slide collections to create a talk (yes, talks were given with 35-mm slides in those days), we planned it so I could give one half of the talk, Larry the other half. At that time, Larry had been developing additional tank cars for his O scale layout, and as few prototypes as there are in model form in HO scale, there are far fewer in O scale. But gradually Larry lost interest in the talk, so I took over presenting the whole thing whenever it was scheduled at a convention, and it was given intermittently for years, up to today. But I decided it needed to be in text form somewhere too, thus the MRH column.
Minor point: the good folks at MRH managed to omit the Appendix from my column (it’s a summary of landmark dates in tank car history, and is mentioned on page 17 of the column). Accordingly, I insert it here, in case you noticed the mention and wondered where the Appendix was. You can click to enlarge it.

That is some of the background for my February 2016 MRH column. As I stated, Part 2 on modeling is expected to follow in the March issue.
Tony Thompson
Posted by Tony Thompson at 10:36 AM