A shelf to sort waybills

Once upon a time, I had little boxes along the fascia of my layout, with pockets where waybills were placed when cars were set out, and from which they were retrieved when picked up. Frankly, I was never crazy about this arrangement, not least because the boxes protruded into the aisle, and even the best-meaning visitor could bump them, either spilling the waybills or injuring him or herself on the sharp corners. I did make them out of clear plexiglass, but they still seemed intrusive to me. Here is one of them, containing the old Allen McClelland 3 x 5-inch waybills. 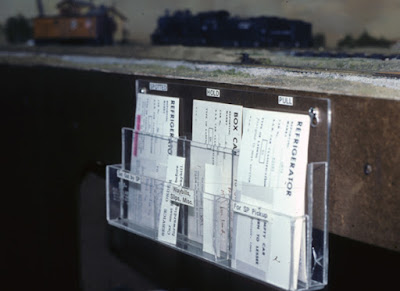 I now use an entirely different system of waybills (see for example my collected prior waybill blog posts available on Google Drive via this link: http://modelingthesp.blogspot.com/2015/12/waybill-posts-collected.html ). But rather than make new little boxes (which have always seemed to me to be support for a waybill process that is wildly unprototypical), I have crews pick up their waybills and agent messages at each town, and when done with their work, return all completed paper to the bill box. However, there still has been no convenient way on my layout to sort and work with waybills, short of spreading them out on the surface of the layout.
I remembered a nice solution to this problem, shown in Model Railroader articles and included in their special issue, on “How to Operate Your Model Railroad,” which is still available at the Kalmbach site: https://kalmbachhobbystore.com/products/special-issues (scroll down to it). The idea was to make a pretty simple shelf out of hardboard; see for example pages 27 and 79 in that issue.
I just copied their design, and used 1/4-inch thick tempered hardboard. The face of my shelf is 10 inches long and 4.5 inches high, and the narrow piece, to be the lip at the bottom, is 1.5 inches wide (obviously these dimensions are arbitrary and can be chosen to fit your space and your preferences). I then cut a strip 1.5 inches wide and 4 inches long and split it diagonally, to make the rear supports. Then the pieces looked like this: 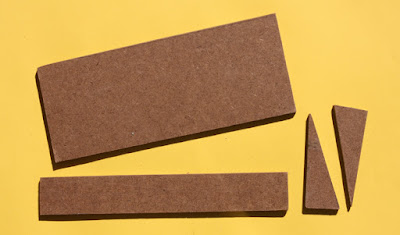 I glued these together with yellow carpenter’s glue, and clamped them until dry.
As assembled, the shelf looks like this. The shelf is to be attached to the layout fascia with screws through the top of the shelf. 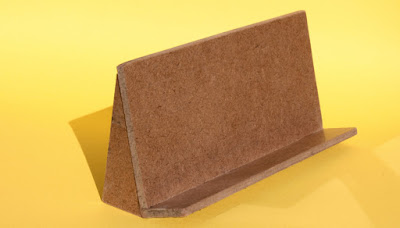 The next photo below shows the shelf as installed at Shumala on my layout, with a passing train on the main line just above it. Shown on the shelf are a couple of my usual waybills, but of course these could be any waybills you happen to use. Incidentally, the waybill at far right is one of my “stop off” bills. I described the prototype and modeling of this form in a prior post (see: http://modelingthesp.blogspot.com/2016/01/waybills-part-47-stop-off-form.html ). 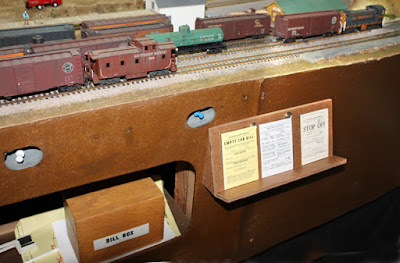 To the left of the new shelf can be seen the Bill Box for Shumala, where crews pick up and drop off their paperwork. When the layout is going to be open for an open house tour, I can unscrew the shelf and get it out of the way.
This shelf will help crews at Shumala work with their waybills, and I will probably build a second one to use at Ballard, on the other side of my peninsula. This shelf design is a pretty quick and easy project, if you feel you need something like this.
Tony Thompson