In a prior post, I showed several recently completed freight cars, none of them noteworthy for any special construction or detailing aspects, but of interest as a way to show the kinds of projects I have been working on. I think each adds to and improves my freight car fleet (that post can be found at this link: http://modelingthesp.blogspot.com/2016/01/recent-freight-car-projects.html ).
I have always wanted to model one of the Katy yellow box cars, and delayed doing so for some time, but finally did buy the Speedwitch Media kit (their no. 105.5) and here it is, moderately weathered (by my modeling year, 1953, Katy had discontinued this paint scheme and was back to repainting box cars in conventional mineral red). The car, MKT 95267,  was caught in a freight at the Nipomo Road crossing, just entering Ballard on my layout. 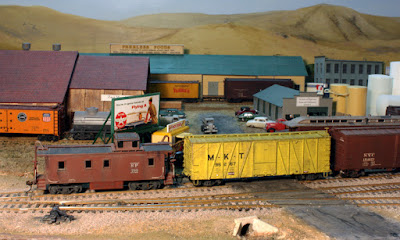 A few blog posts ago, I described a modified Athearn “chemical” tank car, which I converted to an insulated ICC-103 type by adding a Tichy expansion dome (you can read my description at: http://modelingthesp.blogspot.com/2015/12/modeling-insulated-tank-car-part-2.html ). In that post, I showed the completed car, SHPX 13146, prior to weathering. Here is the car with weathering added, and a few chalk marks, shown made up into a train at Shumala. Note the car has both a placard for its load, and a route card attached to the edge of the wood running board, as was often done with tank cars. 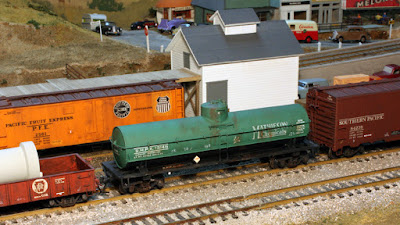 Another recently completed tank car was this next model, a superbly designed and executed resin kit from Southern Car & Foundry, modeling a car which has had two end compartments added after the car was built, thus the smaller domes at each end. Moreover, it is a Standard Tank Car Company (STC) design, with its distinctive STC bolsters. It was built by Dennis Williams and finished by me. The paint scheme of NATX 3403 exactly follows a prototype photo, including Du Pont’s typical light gray paint (a color rendered incorrectly on some models as silver). 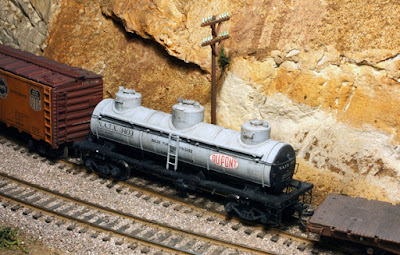 As I did in the previous post in this series, I  include here a ready-to-run car, since I do add those to my car fleet when needed. The one I show here is an InterMountain covered hopper, lettered as Santa Fe 1946-built Class GA-65, which like other Santa Fe covered hoppers of the time, was a distinctive car because the Santa Fe ordered it with inverted T-section roof seams (the ribs on the roof). When InterMountain announced this version of their fine covered hopper model, I ordered one at once. As I have chosen to do the weathering, the car is depicted as serving in cement service, with some staining evident on the boxcar-red sides (in-service photos of these cars show that actually I have if anything underweathered it). It’s shown at its on-layout destination, the California Division of Highways facility in Ballard. 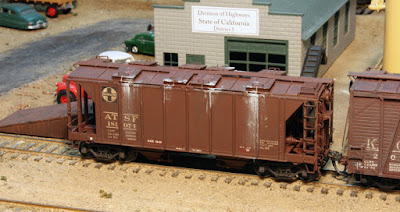 Unfortunately, InterMountain misnumbered this model as ATSF 181974, using a number within the 1942-built GA-58 class (of which Class GA-65 was essentially a carbon copy). Since the bodies are identical, for now I will live with the clash between car class and number.
(For more on Santa Fe cars of this type, you may consult Santa Fe Open-top Cars: Flat, Gondola and Hopper Cars, 1902–1959, Volume 7 in the Santa Fe Railway Rolling Stock Reference Series, by Richard H. Hendrickson, Santa Fe Railway Historical & Modeling Society, 2009.)
Lastly, for awhile I’ve intended to buy one of the Rocket Express double-door 40-foot box car kits, and as it happened, one was among the kits I inherited from Richard Hendrickson. It’s kit RI-1. Dennis Williams built and painted the model, and I did the lettering and weathering of RI 160368. As has been observed by several authorities on the Rock Island, cars like this had black roof color into the 1950s, so I have done the same. In this view, it’s being switched at Shumala. 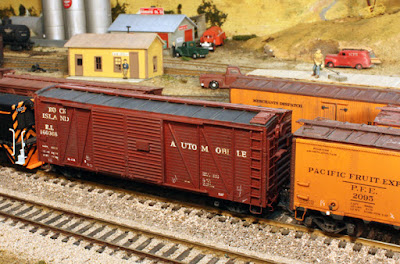 These additional projects may be of interest for a variety of reasons. It’s my intent that they typify the way I choose and prepare freight cars to join the active fleet on my layout.
Tony Thompson