“Could I host an op session?”

This question is one that has come to me from time to time, from people who know that I have both hosted such sessions, and participated in a lot of them hosted by others. The first question I ask such a questioner is usually “What kind of layout do you have?” Obviously some kinds of layouts would be tougher to present for operation than others.
But to start, a layout does not have to be large. It primarily has to offer multiple operating possibilities. So that one-time classic design, in which trains run “round ’n’ round” and cleverly are always popping out of tunnels where you least expect them, is really most suitable for the enjoyment of a single operator, who back in the day sat at a massive control panel and ran the entire show. It might be hard to construct an operating session on that kind of track plan. Likewise, a shelf layout or a ping-pong table layout might offer limited scope for a session, though it depends on the track plan.
But those who ask the question of my title usually already know that much, and already hope they may have a “good enough” layout. My follow-up question usually is about reliability. If you have guests trying to do complex switching moves, or run a local train dodging among a line-up of mainline trains in a busy schedule, the occurrence of derailments, shorts, or electrical dead sections is really disappointing. So I would emphasize that derailment gremlins must be found and eliminated, and likewise electrical faults, especially shorts, have to be thoroughly exorcised. A visiting operator expects to operate, not troubleshoot your layout as a kind of beta tester.
Of course, there is the well-known and often demonstrated adage, that there are always faults which show up in the presence of visitors but not otherwise. This of course is partly true because your visitors may operate a little differently than you do, and also they are running more intensively than you are probably used to doing. But you have to note every fault and fix it before the next session. I once operated on a layout which was very much still under construction, all plywood, zero scenery or structures, and though the trackwork wasn’t bad, we did find a number of problem areas. The layout owner knew that was coming, and circulated among us with a pencil and pad of paper in hand, writing down every problem and its location. That’s the attitude you need to have.
Another point to consider is aisle width. If your aisles are narrow, as is often true, it may be hard for all the needed crews to work. Here is an illustration, in the form of a photo at Ed Merrin’s layout, showing me at right, former SP dispatcher Rick Kang at center, and layout owner Ed Merrin at left, during an operating session on Ed’s fine Northwestern Pacific layout. Rick is asking Ed for clarification on switching procedures at Petaluma, which he is working. As this photo shows, several people may be pretty busy with different tasks, and space may be tight. The operating system you devise has to take space into account, so everyone can do their work. 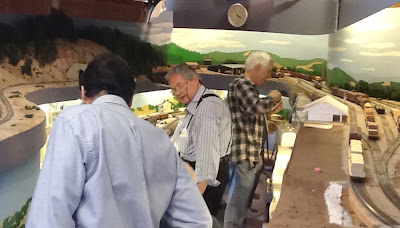 My own layout continues to divulge new and different faults during operating sessions, but in truth, so far they are few in number and minor in effect. Overall, I think I can at least say “pretty reliable” as to mechanical and electrical dependability, and my waybill system seems to work for some moderately complex switching. Below is a photo from a session last September, with Shumala crew Seth Neumann at left and Bill Kaufman at right, working out their next switching move. At least I don’t lack for aisle space. 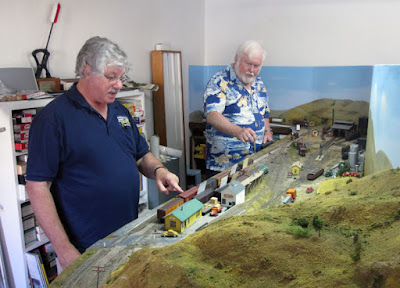 One point I think is important to repeat. You do not have to have an immense layout to have operating sessions. In fact, I have had some impressively good experiences operating on rather small layouts. And my own layout is none too large, in fact accommodates only four operators, as two two-person crews, but they are usually busy for the full three hours of a session. What counts is that you have enough work for crews to do, and that the layout, including rolling stock and locomotives, performs reliably (on that last point, do clean track and locomotive wheels before your session! it makes a difference).
Lastly, I would always urge someone asking about operating sessions to read and reflect on one of the fine books out there about operations. Any one of them will give you dozens of ideas for things you can do. I wrote a post about such books a couple of years ago, emphasizing a few of them  (you can find it at: http://modelingthesp.blogspot.com/2014/03/tony-koesters-recent-operations-book.html ). The Kalmbach operations book by Tony Koester remains in print, and is as good as they come (it’s readily available on-line: https://kalmbachhobbystore.com/products/books?page=2 and scroll down). I also recommend a Model Railroader special issue on “How to Operate Your Model Railroad,” also still available at the Kalmbach site: https://kalmbachhobbystore.com/products/special-issues .
These points are all fairly broad, but with them as starting points, I think that many layouts can host effective operating sessions. It just takes some planning and perhaps a little imagination, to envision what kind of crew assignments will work on your layout. Of course, whether you, as the owner, wish to actually try a session is entirely your own affair. But I think you would find it fun.
Tony Thompson
Posted by Tony Thompson at 10:26 AM