About a year ago (see: http://modelingthesp.blogspot.com/2014/12/modeling-sp-class-o-50-9-tank-car.html ), I began a project to model one of SP’s distinctive tank-car classes, Class O-50-9, which had circumferential top sheets and elbow safety valves. Until fairly recently, there were no decent options to model cars bigger than 6500 gallons with elbow mounts, because the kind of elbow mounting arrangement used for the two safety valves required for such sizes were paired in a single elbow mount.
All that changed with the introduction of the Owl Mountain Models parts for both single-valve and double-valve elbow mounts (their part numbers 1001 and 1002). You can see these parts on the Owl Mountain site if you like (visit: http://www.owlmtmodels.com/detail_parts/detail_parts.html#Vents and scroll down to these safety valves). That got me started on Part 1 of this thread, which is the post cited at the very top of the present post. I dug out an Athearn single-dome tank car kit, lettered for Firestone as you can see in the prior post, and proceeded to strip off all unnecessary rivets and also the dome walk on one side. Then I raised the dome height to the correct size in the way I have shown elsewhere (my method is shown clearly in this article: http://modelingthesp.blogspot.com/2011/05/modeling-sp-tank-cars.html ).
At that point, I wrote up and posted the description cited at the top of the present post. Next, I wanted to install the Owl Mountain safety valve part. This is very easy, as it only requires a no. 46 hole in the side of the dome. As I usually do with dissimilar materials, like joining this bronze part to a plastic car body, I used canopy glue (if not familiar with this very useful adhesive, you may wish to read my remarks and discussion, which is at: http://modelingthesp.blogspot.com/2013/05/a-few-words-in-praise-of-canopy-glue.html ). In the photo below, you see this part, along with a grab iron on the walkway side of the car’s dome, made from 0.012-inch brass wire. Note that a riveted flange (at the dome surface) is supplied as an extra part with the elbow safety valve. 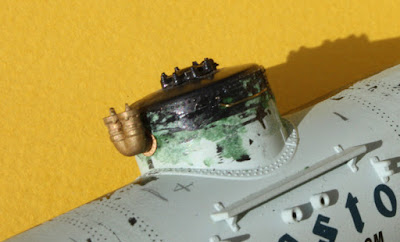 From the other side of the car (the left side), where the dome walk has been removed, the photo below may provide a better angled view of the whole part. 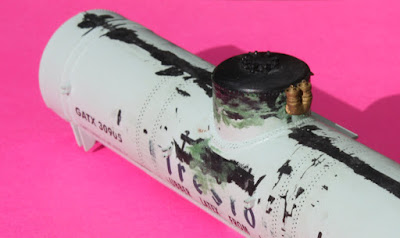 The next step on the car body is the addition of the two overlapping sheets of the circumferential sections on the car body. Dividing the body length into five equal parts, each segment would be about seven and a half scale feet long. But the prototype photos (see previous post in this series) shows the sheets did not come right up to the base of the dome, which they would have to do with if all segments were of exactly equal length. I elected to make all four segments other than the center one, exactly seven feet wide, which is close to the dimension scaled off prototype photos.
To represent these sheets, I decided to cut the two outer or “overlapping” sheets from 0.005-inch styrene sheet, using one of the old 3-hole “sheet protector” plastic enclosures. Gluing these sheets to the styrene tank car body would seem to call for styrene cement, but unless used very sparingly, this cement easily shrinks and distorts sheet as thin as this. Instead, I glued them to the body with canopy glue (see the post about this glue cited above). The sheets were held tightly to the body under rubber bands, and I wicked a little styrene cement under the sheet ends, on each side of the body, at the bottom. Here is the first sheet being added.

Though the added styrene sheet is transparent, you can see its width by the reflection against the black area along its top, under the rubber bands, in the photo above. I allowed it to dry overnight, then repeated the process for the second sheet. This method of attachment worked well.
The new circumferential sheets are now ready to receive double-row rivets at their edges. The Archer Fine Transfer product to use (see: www.archertransfers.com) is one explicitly designed for tank car double rivet rows, their part AR88031 (for the application process and discussion, see my post at: http://modelingthesp.blogspot.com/2011/06/modeling-sp-tank-cars-3-tank-sheets.html ). But there is one thing to be careful of with Archer rivets, and that is to handle the model as little as possible after riveting, until a coat of paint, or Dullcote, or something, is added to protect them. Accordingly, all additional work on the tank body should be completed before applying rivets (and promptly thereafter, paint).
This brings me to the end of this post. In the final post in the series, I will complete the car (underframe modifications are the same as for several other Athearn tank car projects I have described previously), along with paint and lettering.
Tony Thompson
Posted by Tony Thompson at 10:49 AM