In previous blog posts, I have occasionally touched on the point that all railroads have at least some seasonal traffic, anything from iron ore railroads being inactive in the winter, to heating fuel (coal or oil) more heavily used in winter, and to lumber, and building materials generally, primarily moving in the months when construction activity is strongest. An obvious part of this story is produce, with many crops highly seasonal, some with harvesting periods measured in weeks, and at the other extreme, crops like carrots, which in California are grown and harvested year-round. That brings me to my layout, on which there are six packing houses of different kinds.
One of those prior posts (see: http://modelingthesp.blogspot.com/2011/08/few-words-on-packing-houses-and-produce.html ) was part of a thread about packing house modeling. A post last fall went into more detail as it applies to my layout (see it at: http://modelingthesp.blogspot.com/2015/09/seasonality-of-crops-and-traffic.html ), and included specific charts for the area of California in which my layout is set. I listed in that post the particular vegetables being shipped in September, the month of posting. In February, the month of the present post, things would be quite different.
However, the charts shown in the 2015 post just cited are for the entire year, so one can simply look up any month of interest. The charts clearly show that the vegetable shipments from the area of my layout in February and March were dominated by broccoli and cauliflower. Carrots were included too. An intriguing detail is that by March, the first strawberries were being harvested in California, particularly in the Oxnard and Ventura areas, but also near Santa Maria. The first of any crop could well bring sufficient prices in the East that early shipments would go out in express refrigerator cars. The same is true of tree fruits like cherries, and for other products such as the first salmon of the season.
Accordingly, my planned operating session in early March will in fact include express reefers for strawberries. I can also include a few loads of oranges, as shown in the 2015 post’s charts, and can do that from my packing house in Shumala, Phelan & Taylor. This is part of making a March operating session distinctively different than sessions would be in late spring, in summer, or in the fall.
In planning operation with express reefers, it is useful to know whether your prototype railroad did or did not participate with the Railway Express Agency in the REA express reefer pool. In addition to its own considerable fleet of these cars (more than 1500 in 1953), REA also operated the reefers of several other companies, including PFE, Santa Fe, Pennsylvania, Atlantic Coast Line, Seaboard Airline, Great Northern, and a few others. Those railroads not in the pool could supply their own reefers (for example, NP), or if they owned none, would have to call on the pool for cars. It was REA’s responsibility to provide needed cars if railroads did not have their own.
The cars in the pool remained in their original ownership, PFE for example, and any maintenance beyond light repairs was the responsibility of the car owner. But REA carried out cleaning and light repairs for cars away from home rails, managed distribution of the cars, and handled return of empties according to their own needs. It’s known that REA tended to keep pool cars approximately in the area of the car ownership, so they would be convenient to owners’ shops for any extensive repair needs, but any car in the pool could and did show up almost anywhere.
(For those interested, there are more data on the REA pool and PFE’s express refrigerators in Chapters 5 and 8 of the PFE book: Pacific Fruit Express, 2nd edition, Thompson, Church and Jones, Signature Press, 2000.)
My own fleet of express reefers has several PFE cars in it, but also has a couple of REA cars, and a couple of off-line roads too, such as Milwaukee and New York Central. These could be confiscated for loading if made empty and not needed urgently back by their owners. I’ll illustrate part of my upcoming operating session with one of the REA cars, being switched in front of the Shumala depot. REX 1227 is a Walthers model, with weathering added. 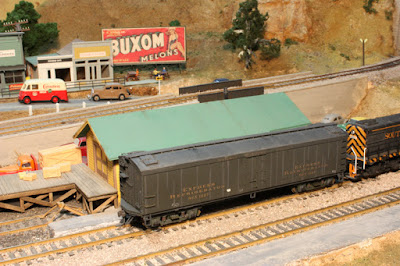 Here are the waybills used to move this car, first the incoming Empty Car Bill, directing the car to the shipper in Ballard (the Ballard agent can tell the local crew where the car goes, though there is only one shipper at the moment using express cars, so probably no directions are needed). The waybill then directs the car to its destination. 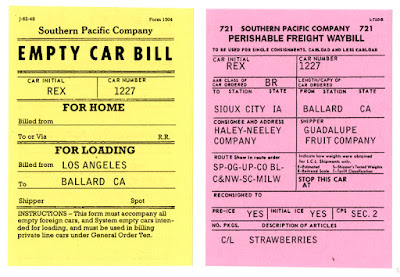 This is a simple addition to my operating patterns, but makes an interesting change with these express reefers, which are entirely different looking compared to the usual 40-foot yellow or orange cars that are loaded at my packing houses during most of the year. I may have to repeat it for other early crop harvests!
Tony Thompson
Posted by Tony Thompson at 10:00 AM