Way back in July 1987, I had a short article in Railroad Model Craftsman, which happened to receive the Dremel Kitbashing Award for that month. The article described how I had kitbashed a distinctive Pacific Fruit Express car, from Class, R-70-2, which was 52 feet long. I was lucky enough that one of my photos of the completed model was selected for the cover of that issue, as you see below. 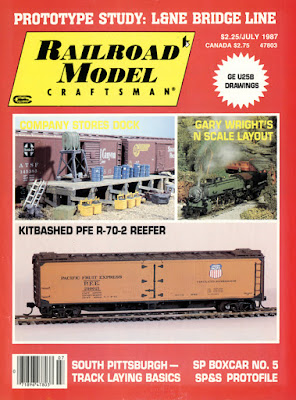 I’ll begin with the car itself. I will only briefly describe the kitbash, as it was straightforward. I took two Athearn wood-side reefer kits, cut out the middle of one and used the ends of the other, to make up a long enough car body. Of course the doors had to end up in the center of the new body. I did the same with the two kit roofs, again keeping the Athearn interlocking piece above the door in the center. I didn’t replace the Athearn ends, which are wrong for a 1932-built car, partly because at that time there was no very good replacement Dreadnaught end.
The prototype car had a relatively deep fishbelly underframe, which I created out of 0.020-inch styrene sheet, with cap strips of scale 2 x 4-inch styrene. I chose to re-use the Athearn truck bolsters and coupler boxes, as you see below. Obviously at this point I already painted and lettered the model.

You may also note here that I have narrowed the Athearn side sill by about 50 percent.
Next I added the cross-ties and Cal-Scale AB brakes. This PFE class was built with K brakes, but most of the cars were upgraded in the 1940s to AB brakes. The brass wire piping isn’t visible in this view, though you can see part of the brake rodding at right.

That brake update stimulated me to think about the fact that when PFE did significant shop work on cars in the 1940s, ordinarily wood running boards were replaced with steel-grid running boards. This class would certainly have been built in 1932 with wood running boards, and that is how I originally modeled this car., using individual stripwood boards. (You can click to enlarge if you wish.)

My chance to make this more realistic, with a replaced running board, came about when Peter Aue made some custom etched-metal running boards. I jumped at the chance to get one, and when it arrived, promptly cleaned up the edges and painted it boxcar red. I attached it with canopy glue, one of the perfect applications of this adhesive, as I have discussed before ( https://modelingthesp.blogspot.com/2013/05/a-few-words-in-praise-of-canopy-glue.html ). The glue remains flexible and can accommodate the thermal expansion and contraction of the metal board.

I like being able to represent a car which has already had some changes since it was built (iin addition to the more obvious signs such as a later paint job). This car is just one example.
Tony Thompson
Posted by Tony Thompson at 12:27 PM