Clerks, waybills, and all that: Waybills, Part 62

I have written numerous posts about waybills for model operation, and also a number of posts about how the prototype managed waybills back in the transition era. In the present post, I want to add some interesting information about waybill offices, including the substantial numbers of clerks needed back in the pre-computer age. My examples are for Southern Pacific.
The traditional yard office operation on most railroads involved lots of pigeon holes for waybills, and groups of clerks passing waybills from hand to hand, both to capture needed information and to re-file them to direct further car movements. Moreover, each group of clerks had a different function. The record-keeping for demurrage was separate from per-diem charges; inbound waybills were handled separately from outbound ones; a clerk was needed to track diversions; manifest or time-sensitive freight was handled separately; specialty movements such as Pacific Fruit Express (PFE) had a separate clerk; and so on. This made a complex paper-handling problem in a large office. 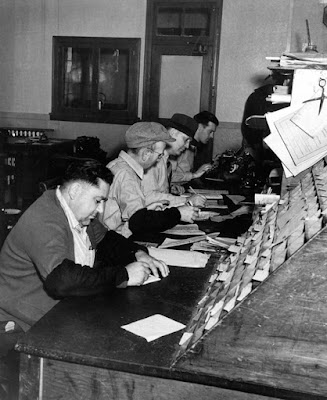 The photo above shows a group of yard clerks, one of the groups just described, working with a large rack of pigeon holes for bills, in the office at Taylor Yard, Los Angeles.
An interesting change in this process was reported in an article in the early 1950s in the Southern Pacific employee magazine, the SP Bulletin. It was an article about an innovation in the Los Angeles (Taylor) yard office. The innovation was a kind of “Lazy Susan” rotating holder for the bills, in the center of a round table. This allowed clerks to share information and rapidly file bills as they worked shoulder to shoulder, instead of each being at a separate desk. Here is a photo of it: 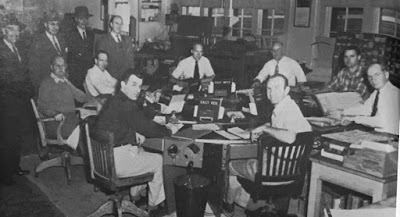 The most interesting part of this photo is the identifications of the clerks. Given in the caption for this image were the following: Standing, left to right: B.W. Mitchell, superintendent, Los Angeles Division; L. Mayrisch, manager, FPM&SS ( Freight Protection, Merchandise & Station Service); G.J. Matt, terminal superintendent, Los Angeles; and T.F. Marlowe, chief yard clerk. [Note that the three senior management people are wearing their fedoras, an unmistakable sign of SP management in those days.] Seated  around the table, clockwise from front, are: J.C. Girard (arm over chair) and M. Neinbaugh, in-desk clerks (that is, inbound waybills); G. Williams, PFE clerk; F.D. McArthur, photo clerk; L.H. Meyer, H.R. Murdock, and L.W. Altizer, out-desk clerks (that is, outbound waybills); and G.S. Flanagan, assistant chief clerk.
The article described the operation of the round table as follows. “A revolving drum forms the center of the new table. On it are eight sorter racks which contain the waybills organized by directions. To work an eastbound manifest train, for example, it is only necessary for the outbound clerk to revolve the drum until the eastbound manifest sorter comes around to him. Then he lifts if off the drum and places it on the table in front of him. Then he proceeds to do his work with the proper waybills.”
But shown in the photo above, of course, is only the staff for the round-table operation. Also part of the office force in this one office was an entire additional group of clerks and other employees, pictured in a separate photo, and again, the identity of the many jobs involved is the real interest. This image, also in the yard office, clearly shows that just about everyone who worked there was pictured, including the janitors. 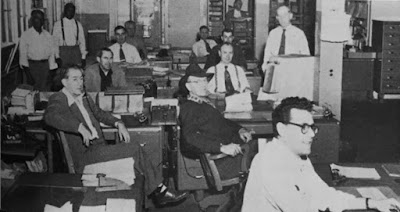 Here the identifications of individuals are as follows: at the left-hand desks, front to rear, are: G.M. Boyd, assistant service clerk; M.L. Brown, service clerk; P.V. Noller, assistant chief yard clerk; and F. Gifford, per diem clerk. Standing at rear are G. Osborne and P. Boyd, janitors. At the right row of desks, from from to rear, are: H. Smoller, steno-clerk; W.A. Pringle and M.W. Anderson, assistant service clerks; M.R. Heinbaugh, report clerk; and D.K. Farrar, assistant service clerk. Standing, at right, are G.S. Flanagan, assistant chief yard clerk, and (at far rear) T. F. Hayes, train clerk.
Though I don’t know exactly what all the job titles mean, it is obvious that there were quite a lot of people managing all the paperwork connected with waybills. And a majority of them are wearing dress shirts (probably white) and ties in both photos, another sign of those times.
We modelers sometimes grumble about handling “paperwork” during layout operation, but I would submit that most of us have little or no conception of what the paperwork was actually like,“back in the day.” This SP Bulletin article offers us just the merest glimpse of the waybill side of railroading in that era.
Tony Thompson
Posted by Tony Thompson at 10:20 AM