An operating session with clock and timetable

I have occasionally conducted operating sessions on my layout with the use of the prototype timetable, a document included in the timetable offered to layout operators (I showed how this was developed and implemented in one of my columns in Model Railroad Hobbyist, the issue for October 2014 [you can read on-line, or download, this or any issue of MRH at any time, for free, at their website, www.mrhmag.com ], if you are interested.) In the past, I have included that timetable in op sessions by making the layout time the same as “actual” time, in other words, people could use their wristwatches or cell phones to see the time, or else I asked them to use those sources, but to subtract or add some number of hours — that one is really too clunky to believe I tried it — but I did — once.
However, now that I have a fast clock, as I described in a recent post (it’s at: http://modelingthesp.blogspot.com/2018/05/fast-clocks-part-2.html ), I can simply set the starting time for a session to the time I want. That’s what I did on a weekend earlier this month. One of the days we only had a crew of three, who divided up the work as it seemed best. In the photo below at Shumala, that’s Otis McGee at left, Ray deBlieck at center, and Ed Slintak at right. The latter two are figuring out how to exchange the power on the returning Santa Rosalia local, whereupon Otis will take over switching at Shumala. That’s the fast clock at upper right. 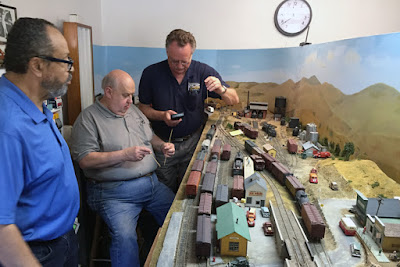 They found the fast clock fit perfectly into the session.
The next day we had a more normal four-person crew, and ran pretty much the same session, based on the morning hours of the timetable (though “actual time” was afternoon). The starting crew at Ballard with the first Santa Rosalia local comprised Steve Van Meter (left) and Seth Neumann (right). 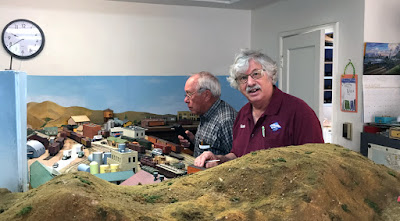 Meanwhile, the other crew, shown below, comprised Richard Brennan (left) and Jim Radkey (right), who finished their work at Shumala, then took over the second run of the Santa Rosalia local. They are shown figuring out the next move at Ballard. 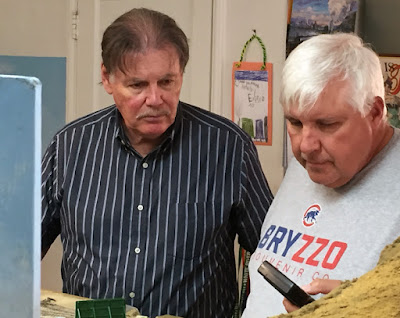 I was happy how the clock worked out in directing the work of the session, and it was also fun to be able to operate some mainline trains according to the timetable. For example, here is Train 914, the scheduled morning through freight, passing Shumala, behind Mikado 3251. 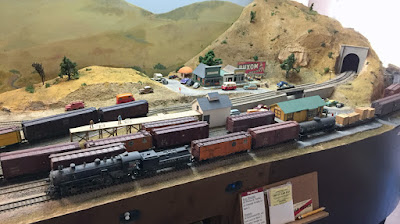 This session worked as I wanted it to, and the “fast” clock, at 1:1, did mesh perfectly with the timetable already on hand. This was yet another step in bringing operation of my layout closer to my overall goals.
Tony Thompson