I know that some people, reading this topic title, will think, “Build the track right in the first place, and it won’t develop sags.” They are right. But that isn’t my topic. I’m talking instead about sags that develop over time. Again, I am not talking about soft or poorly supported areas that show sags. I refer to areas built atop the same plywood and Homasote used everywhere else, but nevertheless, a sag has developed in just a few local areas. In my case, these sags have developed in trackage that has been in place for 30 years or so, and as I said, the adjoining trackage is fine.
That shouldn’t happen, you are thinking, and so was I. But as Jim Providenza has reminded me several times, what “shouldn’t happen” to layout track really does happen.  Jim would probably add, “Get used to it.” But the real point is not why it happened. The problem is, the sags have developed, and short of pulling up the whole area of track and completely re-laying it, what can you do?
I decided to try ways of lifting the track at the sag. The first idea was to drive something underneath the track and ballast, that would lift it a little, until it came into conformity with adjoining track and was reasonably level. I started with a wedge-shaped tool, the common chisel: 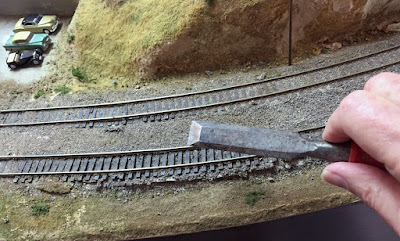 This of course would be abuse of a good chisel, a tool with quite different uses. But this particular chisel is old and worn, so I don’t think I was abusing it beyond its condition.
This is the area just (railroad) west of Shumala on my layout, and is a good illustration of the problem; the inside track just two inches away, is fine, with no sags. Only the outside track needed fixing. It seemed to me I could wiggle the chisel under the track and raise it.

This kind of worked, but the glued ballast was pretty resistant to hand pressure alone. No problem, we will just use a hammer. (As for the photo, of course you normally hold the chisel with one hand and the hammer with the other, but one of those hands is managing the camera):

This kind of works. It certainly raised the track, but raised it in a way that is not entirely all right; it raised the outside rail quite a bit more than the inside rail. So I went back and used the chisel judiciously on the other side or inside of the offending track, and as expected, it was soon raised enough for the track to have the two rails at a comparable level.
But of course “comparable” isn’t good enough. I have a small level I use in situations like this, and with its help, shimmed track where necessary to get rails fully level over the whole stretch being repaired. This level is the kind masons use when checking an alignment string (thus the hooks). 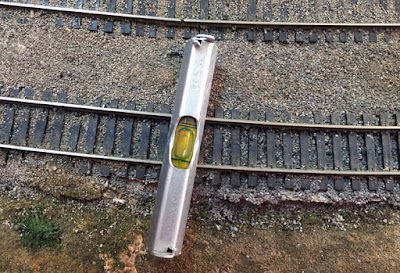 Once I had the track corrected to my satisfaction, the next step was to fill all the voids with ballast and make the track look like the rest of the track in the area. Years ago I mixed a medium gray and dark gray ballast product together to get the kind of variation that real ballast has (it is rarely as uniform a color as a package of model ballast would produce). I use a soft brush to adjust and distribute and contour my ballast.

Once this is complete, my remaining technique is pretty standard. I mist the area with “wet water” until I’m sure it has penetrated, then use an eye dropper with dilute matte medium. I find matte medium superior to white glue for this purpose.
With these steps complete, the sag is all but gone, track is level both parallel and perpendicular to the rails, and track gauge has been checked throughout. This idea of using a chisel under the track to raise it definitely did work, and I will likely try the same on other sags around the layout.
Tony Thompson
Posted by Tony Thompson at 11:11 PM

Email ThisBlogThis!Share to TwitterShare to FacebookShare to Pinterest
Labels: My layout, Techniques, trackwork