In the first part of this report, I described a distinct sag in a part of the main line trackwork on my layout, a segment of track that had been in place no less than 30 years on a piece of my original layout. (You can read that post at: http://modelingthesp.blogspot.com/2018/05/fixing-sags-in-track.html .) As I summarized in that report, I managed to raise and level the track over the majority of the sag. But further checking showed that I had not actually corrected all of it.
I showed in that first part my use of a string level to check that both rails of my track were at the same level. That was fine in the track area I showed in that post. But the adjoining road crossing, of Chamisal Road in my layout town of Shumala, was not level in that sense. The rails were level along their long axis, but the rail tops were not level with each other. I had to remove some of the planks in the crossing, and use a small screwdriver to pry up the track until it was level. 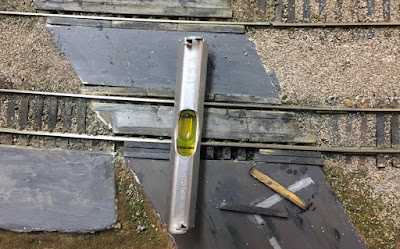 As I suppose is obvious, the rails were built slightly above the surface of the crossing and the road, in order that track cleaning can proceed without interfering with the crossing itself.
In the photo above, the track is not quite level, but reflects the main line profile to the left of this photo. I also had to work a bit to adjust the level off to the right of the photo above, which at the conclusion of the previous work was like this: 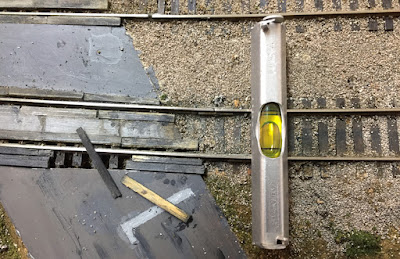 This slight out-of-level was opposite to what is present within the road crossing, so it had to be adjusted.
Whenever work like this is done on a segment of track, there is a danger that the track gauge itself gets altered, either to be wide in gauge, or too narrow. I don’t know how many hundreds or thousands of times I have checked track gauge around my layout, but here is one more, using the trusty NMRA Standards Gauge. I would say you cannot work on track without this gauge. (You can buy them on eBay and from a variety of other sources, but I would urge buying them direct from NMRA, which you can do for your scale at this page: https://www.nmrastores.com/Public_Store/index.php?cPath=27 .) 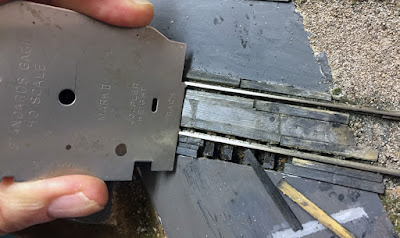 With everything looking good as to level, line and gauge, it was time to try a persnickety locomotive over the track. Years ago, I liked to use a ten-coupled steam locomotive for this task, as one of my Westside engines was very picky about operating over track with the slightest deficiency. This is annoying, of course, in ordinary circumstances, but is quite welcome when checking track. If that engine runs over the track, you can be sure the track is up to standard.
But today my most picky engine is a Broadway Limited diesel with three-axle trucks. It is a lovely model and runs really well, but simply doesn’t like track that isn’t correctly aligned. So I pulled out that engine and ran it back and forth over the corrected track, both with and without a train, and it ran fine. 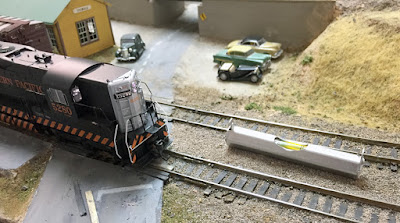 With all these tests passed, this track sag demon can be classified as conquered. There are a couple of lesser sags in a couple of my industrial spurs, so I am not done with this kind of work, but it was nice to get the main line back up to standard. If you have any sags on your layout, these ideas may work for you.
Tony Thompson
Posted by Tony Thompson at 10:19 AM

Email ThisBlogThis!Share to TwitterShare to FacebookShare to Pinterest
Labels: My layout, Techniques, trackwork