Late last year, I posted some comments about fast clocks in model railroad operation, with specifics about my own layout and how it operates, including time issues. I  mentioned that I was leaning toward acquiring such a clock from GML Enterprises, because their product is a physical analog clock, something I wanted to use for my 1953 layout. (That post can be found at: http://modelingthesp.blogspot.com/2017/12/fast-clocks.html ).
Although I spent some time pondering whether a conventional “regular” clock would work fine, since I expect that normal time rate, that is, 1:1, would work best on my switching-intensive layout, I did want to try experimenting with a faster rate such as 2:1. I also like the convenience of being able to have the clock begin at the time of day I choose, not at the physical time we actually begin. So I did purchase the GML system.
The system was easy to install, though I found I had not correctly gotten all the terminal blocks to make good wire contact. Once that was fixed, I was ready to go. I placed a large clock face on the wall above the top of the “T” shape of my layout, so it would be readily visible from anywhere around the layout. To illustrate the visibility, here is Ray deBlieck switching at Shumala on May 12. 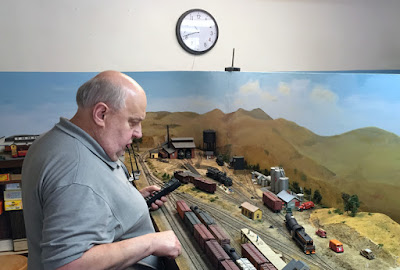 Notice, however, that the glossy cover of the clock does reflect a lot of light, somewhat distracting the eye from the clock face itself. But in practice, we are all used to reading clocks, and the reflections did not pose any real problem.
There is also a control panel, attached to which is the circuitry that drives the clock. I had a place already suitable on the layout fascia, where staging tracks are controlled, so could simply add this GML panel to that area. You can see that. it is a simple set of controls: a “run-hold” switch, and a selector for the desired ratio. The system I chose has ratios of 1:1, 2:1, 3:1, 4:1, and 6:1. There is also an “extra fast” option at right, to enable moving the clock setting quickly to a desired time. The “1 sec” light at center blinks every second at the time ratio set, so goes faster and faster as you increase the time ratios. You can click on the image to enlarge it if you wish. 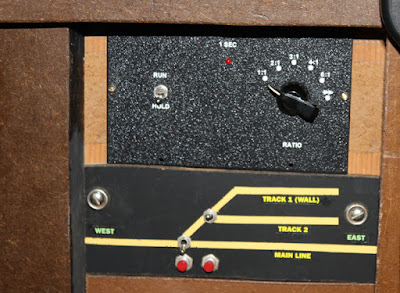 With the ability to start an operating session at any desired time of day, I have several choices, working from the prototype timetable for the Guadalupe Subdivision of the Coast Division in my modeling year of 1953. I can include or avoid first-class trains by choosing a particular starting time, and can include or avoid whichever scheduled through freight trains I wish. I am looking forward to using this clock setup.
Tony Thompson
Posted by Tony Thompson at 10:43 AM