In Part 1, I gave some general background of the 50-foot express reefers operated by Pacific Fruit Express (PFE); you can view that post, if you wish, at this link: http://modelingthesp.blogspot.com/2018/03/pfe-express-refrigerators.html . In the present post, I want to comment on improving the Walthers reefer, shown in the post just cited, along with some other comments on express cars.
If one were to set out to “fix” the Walthers model of an express reefer, ice hatch platforms have to be added for any era after the early 1930s. This would involve removing the Walthers ice hatches, and then building new platforms, and replacing the hatches. I haven’t done that to my Walthers model (and may not, as explained below). Here is how it should look, with an Athearn reefer which has been corrected (though not by me). The new platforms are not horizontal but would certainly be more secure to work on than the curved roof. 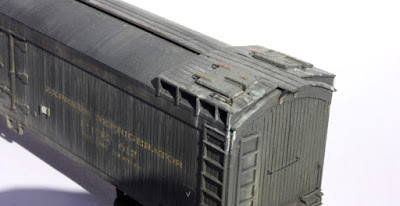 Note here that the Athearn end has been sanded smooth in the upper part, and boards re-scribed, before a new, curved fascia was applied. This does give the right overall look.
I said I may not do work like this on the Walthers model I own, at least not any time soon. Why? Because I own some really nice brass ones. some of which I received in exchange for having helped with prototype information prior to the production of the cars.
Those nice models, done in HO scale brass of the 50-foot express cars, were produced around 30 years ago, by WP Car Corp. Shown below is one of these cars. It has no car number; WP Car included number decals in the box so the owner could choose a number. But no end lettering was supplied. I will add that from Champ sets I have. 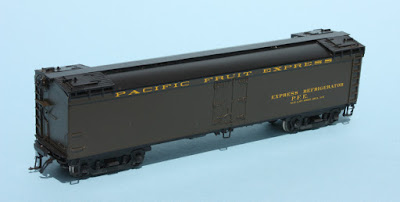 The car duplicates the appearance of PFE 50-foot express reefers from 1929 to 1954, and is thus suitable for my 1953 layout.
In addition to those cars, more recently Challenger Imports also did this car. The Challenger model I have is especially nicely detailed, though its roof is painted the same Dark Olive Green as the sides. Lettering drawings for these cars clearly call out black roofs. That information is in the excellent reference book by Jeff Cauthen and John Signor (Southern Pacific Painting and Lettering Guide: Locomotives and Passenger Cars, SP Historical & Technical Society, Upland, CA, 2013, but notice that that book does not include the black side hardware noted in my previous post (for a citation, see the first paragraph of the present post).
The Challenger model that I have represents the appearance of these cars after the 1954 rebuilding. There were many improvements, most invisible from outside, but two very visible things did change: the fascia board became very narrow, too narrow to accommodate lettering, and the side lettering was rearranged to resemble the lettering used on freight refrigerators. Here is the Challenger car:

For more on the history of these cars, you may of course consult the PFE book (Thompson, Church and Jones, Pacific Fruit Express, 2nd edition, Signature Press, Berkeley and Wilton, 2000). I could always operate this car under a mild, one-year time warp, but have no present plans to do so.
One reason for the PFE rebuilding is that in the early 1950s, PFE’s fleet of express reefers had deteriorated considerably, and starting in 1954, most began to be rebuilt. As a stopgap, PFE also reassigned 50 freight reefers, 40 feet long, for express use (a bit like what was done in the pre-1920 period!). They chose cars from Class R-40-10, and I’ve discussed those cars, and the modeling of them, in some earlier posts (the first post in the series is here: http://modelingthesp.blogspot.com/2016/02/pfes-40-foot-express-reefers.html ). After completing the modeling of the Chrysler trucks used on 25 of the cars, courtesy of Ross Dando’s snubber castings, I showed a finished car (see it at: http://modelingthesp.blogspot.com/2016/03/pfe-40-foot-express-cars-part-3.html ).
An important point for modelers to remember, in planning operation of express reefers, is that a number of owners of such cars placed them in a pool operated by the Railway Express Agency (REA). That meant that cars owned by a particular railroad might roam widely in REA service, and an Atlantic Coast Line car might show up in California, just as a Santa Fe reefer could be seen in Georgia. I described how this pool worked, and showed a table of the contributing railroads, in a prior post (you can see it at: http://modelingthesp.blogspot.com/2015/01/express-refrigerator-cars.html ).
But since the REA pool cars were only in a cooperative operating agreement, not a lease or sale, the original owners remained responsible for all but minor repairs. That in turn meant that each owner’s cars tended to be operated in its home territory, just for reasonable access to shops. My view of that situation is that I would be reluctant to operate, say, that Atlantic Coast Line express reefer on my California-locale layout, while a Great Northern car would seem more reasonable (both were in the REA pool).
My own operating sessions, when particular fruit crops are first harvested and thus command high prices justifying use of express reefers, rely on both PFE express cars, and also very importantly on REX cars (REA contributed over 1600 of the 2500 cars in the 1953 express reefer pool). I also use a few other Western roads (Milwaukee, Great Northern; GN had the second biggest non-REA fleet in the REA pool). In addition, I have a very nice brass model of an NP express car and may include that in my fleet one day.
I enjoy the opportunity to include express reefers in my packing house operations, and am still working to balance my express fleet to my satisfaction. Express reefers are an interesting option for almost any layout in the transition era.
Tony Thompson
Posted by Tony Thompson at 11:18 AM