In a previous post, I described the operation of PFE Ice Service cars, and showed my Red Caboose car in ready-to-run form. You can see it at this link: http://modelingthesp.blogspot.com/2013/06/ice-service-refrigerator-cars.html . As I said in that previous post, the source for all this information is the PFE book (Pacific Fruit Express, 2nd edition, Thompson, Church and Jones, Signature Press, 2000), though it is not all in one place in the book.
I know from giving talks about PFE over the years that many modelers are a little unclear about the entire ice service process. And it is natural to think first about mammoth Ice Manufacturing Plants (or IMP, as PFE termed them) as the source of ice for a big ice deck. PFE did indeed build and operate such plants (Roseville was the largest artificial ice plant in the world in its day), but the great majority of PFE facilities were not like that. Even as busy a place as Watsonville Junction in California did not manufacture its own ice, but only had an ice storage house, from which the car icing operations were fed. PFE called such facilities “Ice Transfer Plants” or ITP, a good name because the ice came from somewhere else.
An ITP might be built and owned by PFE, or it might be a commercial ice company, and if the latter, the ice deck itself might be built and operated by PFE or by the ice company. Evidently some ice companies did not want to be in the car icing business except to supply the ice itself. In the case of Guadalupe, California, the nearest facility to my layout location, Puritan Ice Company supplied the ice to a PFE-built deck, but Puritan employees iced the cars. It was a ten-carlength deck, pretty small in PFE terms but pretty darn big to model.
My model for this post is a conventional Red Caboose kit for PFE Class R-30-9, the immense class of rebuilt cars numbered in the 91,000 to 98,000 series. I simply chose one of these cars, as an older car, to put into ice service, exactly as PFE did. I painted out the kit’s spelled-out road name, PACIFIC FRUIT EXPRESS, and substituted the 9-inch words ICE SERVICE from the Microscale PFE set 87-501.
I also added the white decal placard indicating assignment to ice service which is in that new set 87-501. I used the “Los Angeles” assignment placard, as that is the closest large Ice Manufacturing Plant. Surplus ice might be available from a facility closer than Los Angeles, but obviously the supply would be largest from an IMP like the one at Los Angeles. I should mention that not all ice service cars were assigned to a particular ice source, though many were. You can easily model both types.
The other change I made was to blank off the ice hatch openings. In my interviews with Pete Holst, retired from many years in Car Service at PFE, he told me that to make an ice service car, the vital thing was to remove the floor racks, so that ice could be readily moved into and out of the car, and usually to remove the ice bunker bulkhead for additional space (it could be replaced if the car had to be returned to revenue service). If the car was in the shop for this work, they would usually also remove the ice hatches and blank the openings.
Here is the model, being spotted at the Western Ice Company storage house at Shumala on my layout. Consolidation 2829 has the honors. It may not be possible in this photo to read the white placard, but it says this: “P.F.E. Ice Service Return to Los Angeles When Empty.” 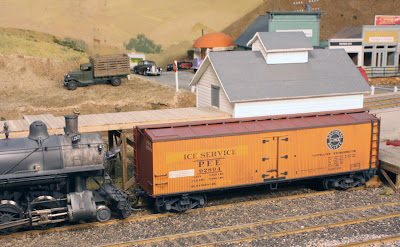 A word on paint schemes. My model described in this post is from Class R-30-9, and had the 1942–1946 paint scheme. This helps identify it as a car which may have been assigned to ice service in the late 1940s, when it was nearly due for rebuilding again, and instead got the ice assignment.
Tony Thompson
Posted by Tony Thompson at 10:33 AM