Keeping those projects on track

I am sure I am not unusual among modelers, in that I often start projects before others are finished, and many times work on two, three or even four projects at the same time. I guess that’s a kind of multi-tasking. But inevitably some projects get held up. A needed part isn’t on hand, or the next required step is intimidating for some reason, or maybe the project just gets stale and enthusiasm wanes. Now what?
Over the years I have evolved an approach to this situation which has proven effective (at least for me). I learned long ago that simply shoving the various bits and pieces of an incomplete project to the side or back of the workbench is asking for trouble — parts get lost or damaged, instructions can be mislaid, and worst of all, both the status of the project, and the reason for stopping work, have faded from memory. Now of course if it’s a commercial kit, one can usually resurrect or borrow the instructions, and by examining the state of the incomplete work, determine which step was the stopping point. But many projects may involve kitbashing or kit modifying or kit upgrading, and then the instructions don’t tell you where you were headed. And as I said, it may not even be a kit that was the basis for the project.
My first piece of progress was to recognize when a project has stopped moving, and collect all the parts and pieces into a suitable box, often an old kit box, and put a piece of white paper tape on the end, where the project name is written. This does help, and avoids parts and instructions being scattered to the four winds. But it doesn’t help with that other bugaboo, the loss of the reason(s) for stopping work or of the original goals of the project.
Here is a photo of one of my storage shelves, with a variety of project boxes of all kinds. There is nothing important about any of these, they are just shown as an illustration of what my project boxes look like. 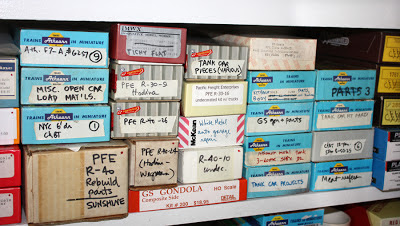 Obviously there is a range of old kits represented by these boxes! I do tend to use whatever comes to hand.
More recently, I have made what may sound like the obvious addition to the boxing up of the project. I write myself a note to put in the box with the project stuff. It might say something like, “wait for the new decals,” or “find out if kit matches prototype,” or maybe “see if Part 17 can be replaced with something better.” Or it might be more open-ended: “figure out how to put a new roof on this building.” Sometimes there is even an entire paragraph or two about what was holding up progress, or what went wrong, or what kind of new approach might be needed.
Here  is an example, actually from the “kit” (actually just a set of parts from Frank Hodina and Terry Wegmann) for the PFE Class R-40-24 car with plywood sides, seen as the small square-ended box in the second vertical row from the left in the photo above. These parts were a gift and did not come with any instructions whatever. My notes suggest a sequence of steps to assemble this “kit.” 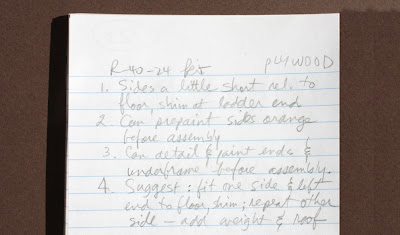 These notes are backed up and supplemented, in many cases, by entries in my modeling journal. This is just a small notebook, which, at least for me, is a big improvement over lots of bits of paper of all sizes, left almost everywhere. Instead, the journal keeps everything in one place and at least a little organized. I talked about this idea in more detail, and showed some example pages from my journals in a previous post (which you might wish to view at: http://modelingthesp.blogspot.com/2012/08/a-modeling-journal.html ).
The example shown above is a note for a freight car, but I do the same for structures and other projects. If I have thought through what will be needed to progress the work, or to finish the project, better to write it down than have to figure it all out again in the future.
If construction of a model calls for anything out of the ordinary, especially any assembly steps which might have to be known to carry out repairs, I also make a “repair record sheet.” Though this is intended to keep track just of repairs, it obviously can be a benefit to know how a car was put together, whether kit or not. This includes which things were glued, and with which adhesives, along with identification of parts used, materials such as wire sizes, etc. And any time any model does need maintenance or repair, I create a “repair sheet” if one already doesn’t exist. Sometimes a fault will recur, and it’s useful to know that.
Another thing I sometimes find valuable with a “repair sheet,” is to help remember a sequence of modification, or the specific part chosen for some reason. For example, in a later project, maybe I’m wondering, “what kind of replacement door did I put on that GN box car?’ because probably I now need the same kind of door for the current project. These details rarely remain in memory, but if recorded on a construction/repair sheet, can be retrieved. I make these by Xeroxing a simple header onto lined, 3-ring notebook paper, then keep them in a 3-ring binder. They are mostly used for rolling stock, but I have done them for a couple of structures too.
Here is an example, a straightforward car kit with a few changes, and including a re-decal job. The decal set is identified, as are added detail parts. Note that I record the car weight. This is partly to ensure that I keep weights consistent, and partly as a troubleshooting aid if the car does not perform as desired. 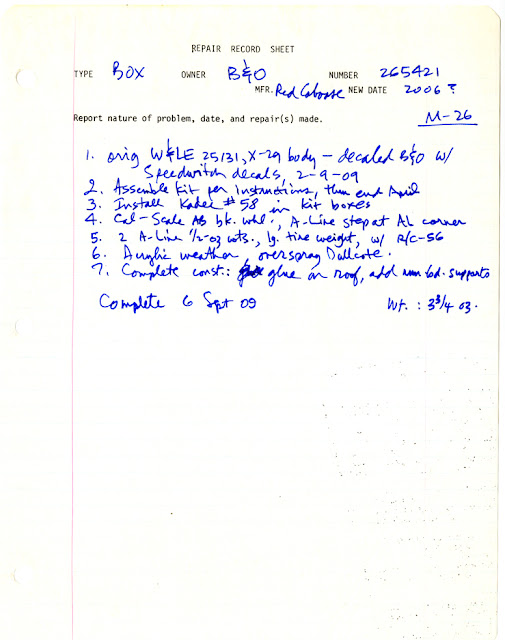 All these procedures help me sustain and finish modeling projects. Yes, some of it is paperwork. Now I can assure you, I do not relish paperwork and only do what I know from experience pays off. What’s described above is definitely in that category. I’ve proved that point to my satisfaction by re-starting a couple of truly old projects and discovering that I can pick up where I left off. If stalled projects are a problem for you, you might try some strategies like these.
Tony Thompson
Posted by Tony Thompson at 9:54 AM