A couple of readers of this blog have sent me email to ask about the little red panel truck often visible in my layout photos. The truck is simply lettered “ICFS.” As an example, this otherwise innocuous shot of PFE 4305 being switched at the ice deck in Shumala has, sure enough, the ICFS truck back there on Railroad Avenue. So what the heck is that all about? 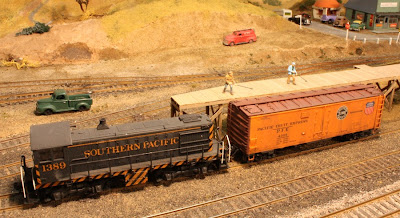 Back in the 1980s when I lived in Pittsburgh, PA, I became friends with C.J. Riley and Larry Kline, and before long, we evolved into a round-robin work group on each other’s layouts, as well as fairly regularly repairing to local taverns for a beer or two. Well, any group eventually needs a name, and being that our group was so small, we felt it needed to compensate by having a correspondingly long name. We chose to call ourselves the “Iron City Ferroequinological Society,” or ICFS. We pronounced it “ick-iffs,” and still do. Heck, we’re all still around and still modeling, even though only one of us now lives in Pittsburgh.
Among other activities back then, we were involved in NMRA contests at both the regional and national level, both as participants and judges, and we were particularly struck, in those pre-1995 days of the NMRA contest rules, that often a pretty darn good model would go nowhere in the contest competition, despite its good qualities, because it didn’t have enough scratchbuilding in its construction. In those days, prototype conformity counted for very little in the NMRA scale, so the kind of model which was kitbashed to a quite good representation of a particular prototype would simply not score well in the NMRA contest. Having seen some of the models up close during judging, we thought something ought to be done.
[Small digression: we didn’t just “curse the darkness” on this topic. C.J. was an NMRA trustee at the time, and he successfully pushed to get the contest rules changed, greatly increasing the available points for conformity, largely at the expense of the points in scratchbuilding, while maintaining the original 125-point maximum score. That took effect in 1995.]
Our solution back in the 1980s was to request permission from our NMRA region (Mid-Central) to present an additional contest award every year, which we called the Iron City Award. The sole criterion for the winning model was to be the “niftiest model in the contest.” Naturally we tended to choose models which didn’t do well under the NMRA rules, and the three of us just put our heads together in the contest room and looked everything over. We rarely had much disagreement about what was truly nifty.
Our award consisted of an HO scale freight car, something big like a Center Flow covered hopper, or 50- or 60-foot box car, which we lettered for the Iron City Award and included a section of an Iron City beer label. The car was then affixed to a short length of track on a suitable pedestal. The plaque on it simply had the award name, the place of the MCR convention, and the year.
Here’s what that logo looked like, though this isn’t one of our award cars. 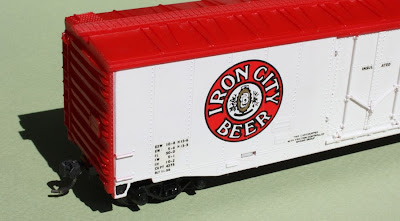 By the way, Iron City (or as someone from the ’Burgh would say, “Ahrn City”) was a pretty tasty beer back in the day before there were many craft beers.
What does this have to do with the truck? I had volunteered to make the award every year, and had been faithfully doing so, when C.J. Riley decided I should get some sort of reward for my work. The HO scale truck was my Christmas present that year. It is an Alloy Forms 1951 Ford panel delivery truck. Riley did some extra work, modeling the back door of the truck open, to accommodate some over-length lumber, along with the ladder on the roof. 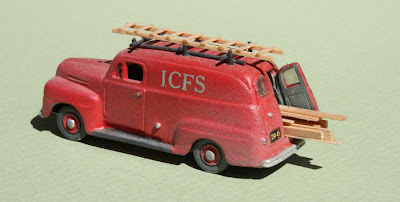 The ladder on the roof is a reference to a kind of “inside ICFS” story. Riley often says that if you make a mistake in building a model structure, just put a man on a ladder in front of it, and no one will look past the ladder to spot your mistake. So the truck is on the way to supply such a ladder to somewhere it’s sure to be needed on my layout.
Contrary to one comment I’ve heard, the ICFS truck is not in every layout photo. But since the truck does move about the layout, it can certainly show up almost anywhere.
Tony Thompson
Posted by Tony Thompson at 9:14 AM