Unlike U.S. practice, the Canadian railroads, Canadian National and Canadian Pacific, built substantial numbers of refrigerator cars with overhead ice bunkers. There is no doubt, from the results of several testing programs, that overhead bunkers provided much better temperature uniformity throughout the load than end bunkers. But it turned out that car fans, first introduced at the end of the 1930s and widely used in American practice after World War II, can provide comparable temperature uniformity, even with end bunkers.
So why did the Canadians continue to build overhead bunker cars, while U.S. reefer fleet owners did not? I explored this point at some length in the PFE book (Pacific Fruit Express, 2nd edition, Thompson, Church and Jones, Signature Press, 2000, page 150–53), and will only summarize here.
The Canadian railroads did handle produce in end-bunker reefers, but also had the problem of export meat shipments, in which cars might sit at the port for a time before their cargo was loaded onto a ship. The overhead bunkers did a better job of keeping cargo cold in those circumstances. Moreover, car fans were not as practical in a severely cold and snowy winter climate, as is true of much of Canada. But back to my own interest in the subject.
I have a special interest in Canadian reefers, on account of something that happened when I was a teenager first getting interested in scale model trains. I had built a couple of car kits, but they were really chosen at random. Then I happened to be in my local hobby shop of the era (the Brass Hat on Pacific Avenue in Glendale, California) and saw a new Varney reefer kit, for a gray Canadian National reefer. I was thunderstruck! I had just seen a car like this in Los Angeles while on an errand with my dad. My gosh! There were kits for cars just like the ones you could see on the rails! I bought one and built it, and was very pleased with myself.
I know in hindsight that those Canadian reefers in Los Angeles were almost certainly carrying export beef, but of course in those days I had no idea about cargoes or car routing. But at that time, it was just a kit for a model which looked (to me) just like the CN car I had seen. It was gray, it had red lettering, it was a refrigerator car . . .
Now in fact the Varney reefer is not really much like the prototype CN car. But at that point, I wasn’t sensitive to car characteristics, and almost certainly had not noticed the “extra” ice hatches on the roof of the prototype car, not to mention other features like the underslung heater. I was just delighted to have a model of a gray CN reefer that globally was like the prototype I had seen.
I still have that model, and it still boasts its original Varney dummy couplers, evidence that I have never seen fit to upgrade the car to operate on any of my layouts since my teenage days (when all my cars had Varney dummies).

The weathering is brushed-on paint, not too terrific, and of course neither the boxcar-red ends nor the black ice hatches are prototypical — but I didn’t know that then.
This is now a current topic because True Line Trains in Canada has recently brought in ready-to-run models of the steel overhead bunker cars. I chose one with the same paint scheme as in my historic Varney model. But of course the TLT car has all the right appliances, all eight roof hatches, and so forth. A big step forward as a model, but the Varney will live on in my display case. 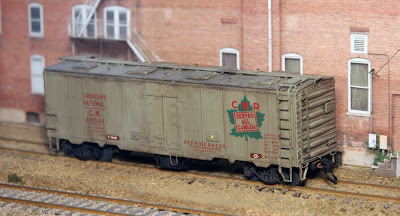 This photo shows the side of the car with the underslung heater, just visible behind the center sill step. The model is weathered and has a route card.
There have been kits through the years for the overhead-bunker reefers. Ambroid had one, and I think the Funaro & Camerlengo one is still available. But this one didn’t need to be built, and appears accurate to me. So that is why I am now happy to have a new and correct model of a car that has only had a pretty lame version in my freight car fleet for all these years.
Tony Thompson
Posted by Tony Thompson at 9:42 AM