Microscale has released a revision of the long-available decal set 501 (both 87-501 for HO scale and 60-501 for N scale), which is for PFE cars lettered after April 1950, when the black-and-white UP emblem was adopted. This is a huge improvement over the old set. Dick Harley did a great deal of research in putting together the artwork for this superb new version of the set, and it will be most welcome to many PFE modelers of the 1950s.
The old set had a limited amount of some lettering, had way undersize capacity and dimensional data blocks, had somewhat wrong character shapes, to just mentions some of the shortcomings. It did have fairly good black-white UP emblems, which was mainly what I used to use it for. But this new set corrects all those shortcomings, even the UP emblems, and adds much more lettering. It is a great job by Dick Harley and will thoroughly serve anyone modeling PFE after 1950.
In previous posts, I have described various ways of cobbling together car lettering for the post-1950 lettering scheme from various sets, including the old version of 87-501. For example, I did that in both my posts about PFE Class R-40-26, the kitbash car conversion (you can see that discussion at: http://modelingthesp.blogspot.com/2013/07/kitbashing-pfe-class-r-40-26.html ) and also the second post about correcting a brass model (at: http://modelingthesp.blogspot.com/2013/05/correcting-brass-model-of-pfe-car.html ). Some similar discussion was also involved in my description of how I lettered a PFE Class R-40-14 car, kitbashed from an Athearn model, which is at: http://modelingthesp.blogspot.com/2013/05/upgrading-old-models-athearn-reefers_9.html .
Here is what the set looks like. This image is not very high resolution, having been lifted from Microscale’s web site, so clicking on it to enlarge it will not be very satisfying. But you can certainly gain an impression of all that is included. The set includes two copies of this sheet; six cars can be entirely lettered with the full set. 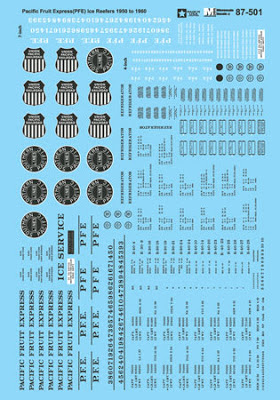 You can see the set for yourself (and order it direct, if you wish) at this link:

I’ve already purchased two sets of these new decals myself.
Whether your local hobby shop will carry this depends entirely on the shop. I know that many smaller shops have stopped trying to stock all available decals, but I bet they will order it for you, if you would prefer to support your local store.
Tony Thompson
Posted by Tony Thompson at 10:51 AM