A few years ago at a model railroad swap meet, I picked up an old metal tank car, assembled and with Mantua loop couplers on a “Talgo-truck” arrangement. It even has aluminum lettering, which I believe is correct for Crystal Car Line.

The details and construction of this model convinced me that it is an Athearn metal car, of their “shorty” series, though it was sold without a box. Some details like grab irons are oversize, and some are crudely executed, but the model is solidly constructed and should, with replacement trucks and couplers, be able to serve on my layout, at least as a “mainline” car (meaning you will only see it in passing freight trains). It also needs a vertical-staff hand brake and some paint touch-up, plus the addition of end lettering.
What would be the gallonage of this tank? Well, figuring that out is not difficult, as I posted previously (the post is available at this link: http://modelingthesp.blogspot.com/2012/10/naperville-tank-car-handout-part-2.html ), so here are the results. The tank is about 30 feet, 9 inches long over its cylindrical part, and about 7 feet, 4 inches in diameter, or 369 inches by 88 inches. Using the cylinder formula, this is 2,244,301 cubic inches, and dividing by the conversion factor for gallons in tank cars, 225 (as explained in the post just cited), it comes to 9974 gallons. This is quite close to 10,000 gallons, and being off by less than 1 percent, in fact is within the usual prototype manufacturing variation among nominal 10,000-gallon cars. But the actual Crystal Car Line cars, including number series 301–320, were almost all 8000 gallons, so this car is oversize. Again, as a mainline car on my layout, this is not a major problem.
I started by removing the trucks. If anyone needs a pair of Mantua trucks like this, let me know.

I soon found that the bolsters are conveniently drilled and tapped for 2-56 screws, my standard for truck attachment. For new trucks, I used a pair of Athearn sideframes on hand, with new Reboxx narrow-tread wheelsets. Width of wheel tread is especially evident on tank cars, and I think the improvement in appearance with narrower wheels is immediate.
Then I turned my attention to the couplers. The vital point is to get the coupler pad height correct on an older car like this. I showed how to do this, and illustrated it with a photo, in a prior post (you can see it at this link: http://modelingthesp.blogspot.com/2012/03/replacing-snap-in-trucks.html). The original cast-on coupler boxes had been ground off to clear the Mantua couplers, but I still had to grind a bit more to achieve a correct height. I prefer to use Kadee coupler boxes, and chose to drill and tap for 2-56 screws to attach the new boxes for my standard coupler, no. 58.
With those changes out of the way, I touched up all the paint, and added end lettering (the car as I received it had none). I used a Tichy tank car brake wheel and brass wire staff large enough in diameter to fit the tank car. 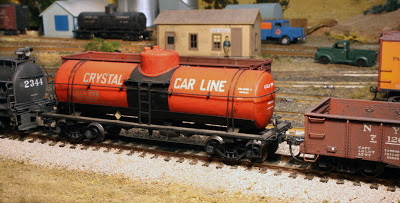 As this photo behind Ten-wheeler 2344 shows, the car is now at work on my layout hauling edible oils, though since I have no such industries myself, it will have to be restricted to mainline service. And that service is just what’s appropriate to its level of detail, as I pointed out in the early part of this post!
Tony Thompson
Posted by Tony Thompson at 4:17 PM