In the first post of this series, I talked about my discouragement with the majority of the collections of HO figures on the market, though there are certainly some worth having — or working on, to make them worth using. (Find that first post here: http://modelingthesp.blogspot.com/2017/05/figures.html .) In the present post I will begin a description of some of the modifications and changes that I make to commercial figures.
After fighting with the bases cast onto some figures, and not being happy about how well they could be disguised (so few prototype people stand on little discs), I decided to take another approach. Nowadays I cut off the base of any figure that comes with one, and add my own. And for the figures that come without any base, I add the same new base to them as well.
My new base is simply a piece of clear plastic sheet, not much bigger than the footprint of the figure, and usually of 0.010-inch thickness. (Evergreen and others sell clear styrene sheet like this.) I always use canopy glue for attachment, as it dries clear and is quite strong. I just add glue to the figure’s feet, set it onto the base, and support it upright till the glue sets.
I sometimes trim the plastic base to an oblong shape, but usually I just leave it as a rectangle. Yes, you have to use the shiny clear plastic, since a coat of flat renders it non-transparent. That means that in just the wrong lighting angle, a viewer will see the reflection of that little rectangle. But judicious placement on the layout can minimize or altogether avoid this problem, as I have learned by experiment.
Being transparent, this base is a little hard to photograph, but by angling the light to emphasize the reflection, you can see it.

One of the figures to which I added a base is one of the June’s Small World people shown in the first post, the middle one of the three shown (figure W5 in their series, described as “man shoveling”). I mention this figure because of the wide stance of the figure’s legs, necessitating a wider base than would be needed for a person standing normally. This high-angle view was chosen to catch the light reflection.

But though the base looks very intrusive when reflecting the light, in almost any other light angle the figure looks like this, with the base really not evident.

Another modification is to change the tools the figure was made with, or add new tools. One good example is my ice deck crew at Shumala. They are using the two ice tools used throughout Pacific Fruit Express territory, a two-pronged forged steel bar called a “bi-dent,” and a wood-shafted tool with a point and a hook, called a “pickaroon,” designed so you could both push and pull ice blocks with it. In the Jim Morley photo at Roseville,, shown below, the “passer” at left is moving the ice block toward the hatch with his pickaroon, while the “chopper” at the hatch is about to chop up the block as it starts into the hatch, using his bi-dent.

For my model scene, I made the tools from brass wire, and modified suitable figures to hold them. 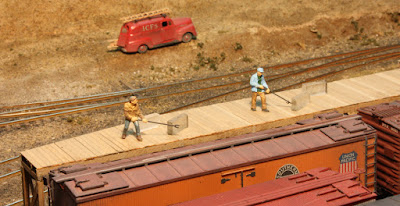 The ice blocks here are the 300-pound size that was standard for manufactured ice in the West; the crews will break them up before putting them into ice bunkers.
Here is a close-up of the two tools, which at least resemble the prototype ones you see above in the Morley photo.

These modifications are fairly simple, and yet readily make figures look better, or make them fit better in the place you want to put them on the layout. And the ones you didn’t want to use, because of their poses, are likewise candidates for correction. That includes repainting, which I will take up in a later post.
Tony Thompson
Posted by Tony Thompson at 4:23 PM