In the previous post in this series, I showed a few basic approaches I have used in painting or repainting HO scale figures (that post can be found at this link: http://modelingthesp.blogspot.com/2017/05/fijgures-part-4-painting.html ). I have some additional comments to add in this present post.
Before starting, I will included a strong recommendation for a book I use all the time, Sheperd Paine’s How to Build Dioramas. It’s a 1980-vintage Kalmbach publication (I have the 1984 printing), and it was re-issued in 1999 as a second edition. It’s now out of print, but can be found at several on-line booksellers. Here is the first edition cover: 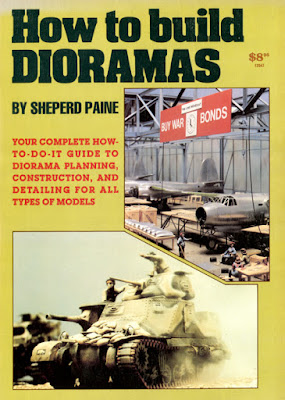 Its strength for me is a 14-page chapter on detailing and painting figures, and that’s the relevance to this post. The figures shown are not HO scale, but the ideas on both posing figures, and also on painting, are very interesting.
Now I will show some of my figures with painting finished. First, I want to show the completion of the originally unpainted “Station Crew” figures from the AHM set that I showed in Part 4. The one on the right carries a dark green lunchbox.

Another figure I want to “reclaim” from its original form was a man holding a tool of some kind, looking kind of like a rake or oversize mop (or perhaps a European farming tool). The figure is shown on the left below, in its original form. I cut off the base to add my usual clear plastic base, filed down the tool to look more like a broom, and cleaned up mold lines on the figure. Then I painted the broom handle light brown, the broom itself a “yellow sand” color, and changed the shirt color as well as fresh paint on the pants. The result is shown below on the right. 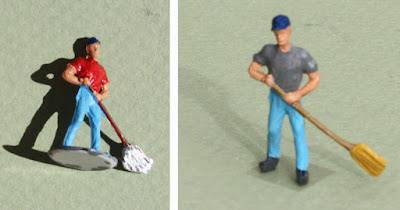 In Part 4, I showed a metal figure in its original SS Ltd. package, a man in a pushing position. That figure too has now been painted in its entirety. I took advantage of the molded rag or bandanna in the man’s back pocket, and painted it red. 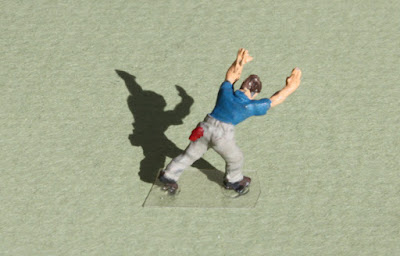 In a comment to Part 1 of this series, it was mentioned that actual people have been scanned and then reproduced in HO scale by 3-D printing (see that post and comments at: http://modelingthesp.blogspot.com/2017/05/figures.html ). Digital files for these figures can be obtained from the thingiverse site, as was mentioned by Robert Bowdidge; you can see some of the “Great Fredini” figures at this link: https://www.thingiverse.com/search/page:1?q=Great+Fredini&sa=&dwh=395927872ac1884 . You can then get files printed by services like 3D Hubs.
Robert gave me a couple of figures he had printed himself from the digital files, and I decided to paint them. Here are the two as I received them. Remember, these are actual people; for example, the woman is identified as “Amy S.” You will immediately note that these are not the athletic-looking bodies of many Preiser-type figures. Note also the comment by Robert, attached to my Part 1 post, that these figures do not have the subtle enhancements of edges of clothing items, that would make painting easier. 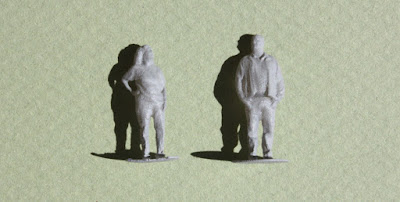 The painting process was like any other figure: first the flesh tones, then pants and shirts (if under a jacket), then the outermost items, jackets and shoes, along with hair. 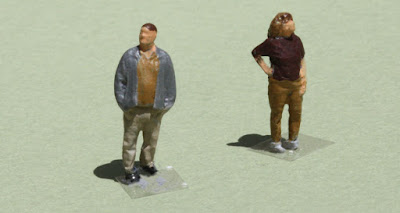 These exercises in figure painting have been instructive to me, as well as fun, and of course also generating some “population” for the layout. That leads to an additional topic, placement and arrangement of figures, and although they can be put almost anywhere on a layout, there are some guidelines you can use for most effective placement. I will take that up in a following post.
Tony Thompson
Posted by Tony Thompson at 10:02 AM