I still recall another modeler’s comment from some years ago, when I was on a layout tour. The layout we were viewing had a model house trailer back in one corner, amidst the scenery, and the modeler I’m referring to said, “House trailers are probably the commonest thing in America that modelers don’t include.” I was surprised when I heard the remark, but on reflection, realized that there was considerable truth in the comment. I’ve resolved ever since to act on that observation, but until now hadn’t actually done anything about it.
There have been various models of house trailers commercially available for years. Naturally, some have been better than others. But I didn’t have to choose one, because I had in my stash of potential structures, a very believable 1950s-era trailer casting, one molded in one piece in clear resin by my long-time friend C.J. Riley. I decided to figure out a use for this nice casting.
My layout doesn’t have space for much in the way of residential areas, and I have on occasion looked to see if I could find a spot where I could tuck a trailer among some trees. But recently I had an idea for a much better use. This trailer could be used as an office or storage space. So I took the clear resin casting, masked all the windows, and used a rattle can to spray it a primer-gray color. You can see its distinctive shape in the photo below.

To me, this is a perfectly in-era model. Thanks again to C.J. for conceiving it, making a master, and giving me one of the castings. I think he may have included this trailer in his line of resin-cast model parts, back a decade or so ago.
Photos I could find on-line of old house trailers often showed doors of a contrasting color, with the same color sometimes repeated in a trim stripe or in the window frames. A semi-permanent trailer placement often has the running gear hidden behind a false wall around the base, as this model portrays, and this too is often a contrasting color. I also added steps up to both doors, from the Central Valley “Steps and Ladders” set, no. 1602.
My idea for using this trailer was as a temporary office for my Port of Santa Rosalia. It can be placed near the sea wall and be an additional reminder that the cannery and fishing boat basin I’ve modeled are only part of the activities in the area. The office use would be designated by signage only, and could of course readily be altered to some other use in the future, simply by changing signs. (You can click on this image to enlarge it. The larger sign reads, “Harbormaster, Port of Santa Rosalia.” The smaller sign over the door simply says “Office.”)

I had a small space near my Santa Rosalia waterfront, for which this trailer was perfect. It sits alongside Willow Lake Road, right across the street from the SP depot. An offshore fog bank is evident in the distance. 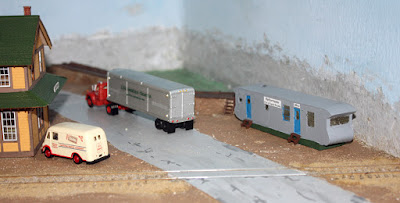 With the signs it now has, it can help remind visitors of the waterfront just beyond it. I will probably add a lawn and walkways in front of it, maybe a small parking area. And I’m glad to finally find a good use for my friend Riley’s nice trailer casting.
Tony Thompson
Posted by Tony Thompson at 11:32 AM