In the previous post in this series, I completed the addition of two more domes, and a longer dome walkway, on the way to my stand-in tank car as a three-compartment conversion (the post about that work is at the following link: http://modelingthesp.blogspot.com/2017/05/creating-wine-tank-car-part-2.html ). Next comes relettering the car, and an attendant problem.
The problem arises in choosing lettering for the domes. On multi-compartment tank cars, each compartment had its own capacity, and that capacity was lettered on the dome. The total for the entire car was usually not lettered on the car end, although it typically was for single-compartment cars.
In addition, domes received identification symbols. On a car of four or six compartments, the compartments are numbered, respectively, from the A and B ends of the car, as you can see in this detail portion of an image of GATX 410, with A-1 and B-1 at the A and B ends, respectively. The center compartments then are A-3 and B-3. (You can click on the image to enlarge it.) Photo is from the Richard Hendrickson collection.

On a four-compartment car, the compartments are numbered A-1, A-2, B-2 and B-1 along the car from the A end.
Most three-compartment cars, like my model, had end compartments lettered A and B, and the center compartment was given the letter C. That is shown below in a detail of the image of GATX 1095 (the same photo shown in the first post in the present series), and you can see all three compartment letters. But unlike the six-compartment car above, the designating letter was placed above rather than below the capacity numbers. In both photos, the diamond indicating an approved (bolted) manway is to one side of the other lettering.

For a car number, I decided to use a General American car number from among one of their large batches of converted three-compartment cars. There are two such series, roughly GATX 1080 to 1190, cars which were almost all 6000-gallon cars (considerably smaller than the Walthers car I’m converting), and also the GATX series 1327–1410, most of which are near 8000 gallons. This is still a little smaller than the Walthers car, but is close. Thus this model is indeed a stand-in, and as stated, that was the original goal.
Among the decal materials I inherited from Richard Hendrickson was a whole bunch of partly-used Roma wine decals, which have full sets of lettering for multiple compartments, perfect for this situation. I had to “bash” the lettering to get an approximately right set of capacities. Here is a view of just the dome lettering. I placed the dome identity letters below the capacities, and added diamonds also.

The entire car came out pretty much how I wanted. It still needs to be weathered before entering service on the layout, but here is how it looked at this point, with all lettering complete and flatted. 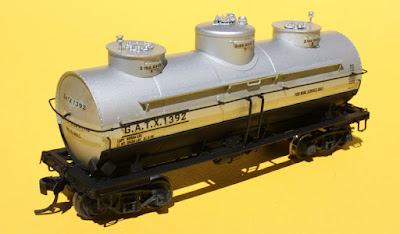 I felt like this “quickie” project did result in an acceptable wine tank car. It is a little oversize for the prototype car with the number GATX 1392, but not badly so. My project was partly intended to show how easy it really is to add domes to a single-compartment car, and I believe I did that.
Tony Thompson
Posted by Tony Thompson at 12:23 PM