April 19th to 23rd were the dates of the annual meeting of the Pacific Coast Region of the National Model Railroad Association for 2017, held in Bakersfield, California. I was in attendance for most of the meet, and gave a couple of talks. There was a full clinic schedule, with many very interesting topics, organized mostly by Bruce Morden, who deserves credit for the fine program. Just one example, below, shows Dennis Drury in the middle of his talk about “A Cheap and Easy Automatic Block Signal System,” which naturally attracted full rooms both times he presented it. 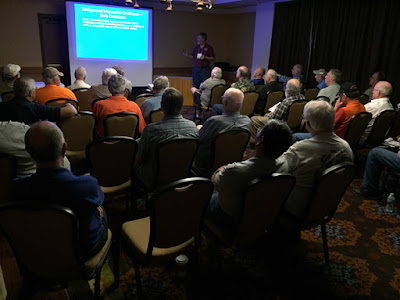 Yes, it’s true, a lot of us sat in the dark, hour after hour at clinic after clinic, hopefully absorbing good or useful information.
I always enjoy visiting the contest room, to see all the entries in various categories of the contest, and often we also have “display only,” non-judged, entries. One I liked (I apologize for not getting the modeler’s name) included some well-done open-car loads, such as the girders shown below. 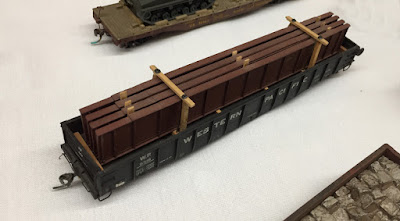 A very nice feature of the meeting was the portable switching layout brought by Robert Pethoud, called the Fall Creek Branch. Clinics about how the layout was designed and built were presented right at the layout, and separately, operating sessions were hosted in which crews were given a switchlist to follow. The modeling is very nice, as you can see in the view below of just one part of the layout (it’s 12 feet long). There was an article about this layout in the March 2016 issue of Model Railroader. 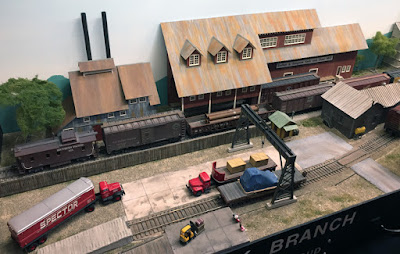 One crew that took up the operating challenge while I was there was Seth Neumann, seen in the foreground below in his role as conductor, and his engineer Pat LaTorres (behind him). They certainly had fun doing the switching, and their elapsed time to complete the job was among the better ones posted. 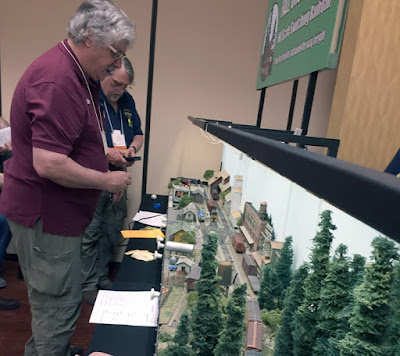 The proximity of the convention site, Bakersfield, to Tehachapi railroading was naturally an irresistible stimulus to head up toward the mountains. On Friday evening, after the last afternoon clinic, a whole group drove out to Sand Cut and Bena, where we were lucky enough to see several trains, mostly BNSF. Here is a shot I got of one of the trains, crossing Caliente Creek, east of Bena, 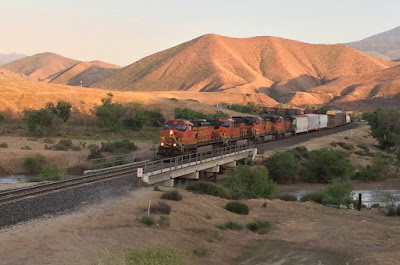 All in all, it was a good meet. Though Bakersfield is at the extreme south end of our Pacific Coast Region, any losses from our usual region attendees not making the trip were made up by a whole bunch of people from adjoining Pacific Southwest Region, and it was fun to renew acquaintances with many of them. I always enjoy regional NMRA conventions and try to attend as many as I can.
Tony Thompson
Posted by Tony Thompson at 10:43 AM