Now I want to talk about painting. I have on occasion seen modelers physically recoil at the suggestion they could paint their own figures. But in fact it is straightforward, and like so many modeling tasks, is really a series of small, easy tasks. I will admit I was one of the “recoilers” until I saw some unpainted figures that really suited what I needed. I decided to buy them and see how it would go. What follows is intended as a simple introduction.
Metal figures have a natural heritage from toy soldiers, and have been around the hobby from its inception. Here is a single example of such a figure, one of a large range marketed by SS Limited in their “Lil’ Folk” series. They are cast in a soft white metal (maybe a variety of pewter), and so the flash and mold lines are quick and easy to remove. 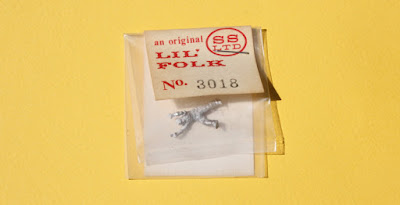 On occasion the big companies that make figures sell “economy packs” of unpainted plastic people, and as with metal figures, they too need to be cleaned up. One company which used to sell unpainted white figures all the time (and I think at least some of them looked like Preiser figures), was Associated Hobby Manufacturers, or AHM.  Here are a couple of their figures from a set called “Station Crew.”

I especially like the hand truck, a ubiquitous tool for moving heavy things in the 1950s, when I model. The man with a lunch box is good too.
Here are a couple of metal figures and one plastic one, which I’m going to paint for this blog post.

The plastic figure has a base, which is handy for holding the figure during painting, but which I will remove later. The metal figure at right is from SS Limited.
I should mention that I have often consulted a couple of books to get ideas about painting miniature figures, one of them the fine Ray Anderson book I showed in the previous post in the series, Part 3, and the other is the Sheperd Paine-Lane Stewart photography book that I reviewed some time back (see that post at: http://modelingthesp.blogspot.com/2015/02/photographing-railroad-models-part-2.html ). Neither addresses HO scale or railroad figures as such, but both contain numerous intriguing photos of painted figures, which do give me ideas and inspiration.
Once I have cleaned up a casting like the ones shown above, whether it is metal or plastic, I always begin by painting the face, neck, and hands (arms, if needed). The key here is to have a realistic-looking flesh color, whether for Caucasian or African-American figures. I use Tamiya no. XF-15 (“Flat Flesh”) for Caucasians. I never fail to be struck how much difference it makes to add that flesh color, because suddenly the little chunk of metal or plastic does look like a person, just with white or silver clothing (sort of). Compare the view below to the one above:

I did paint the hat on the figure at left, and the pants at right, using Tamiya no. XF-57, “Buff.” But the flesh tones matter the most. I guess our brains are so accustomed to “reading” a flesh color as a human being, that the effect of seeing just the faces and hands painted is startling.
Next I start choosing other clothing colors. Here you can choose as you like, and this is one of the strengths of painting your own figures: they need not look like commercial ones at all. I do like to suggest denim pants or overalls, with a range of blue colors, but shirts can be almost any color at all, and pants can be gray or brown or olive. I usually paint shirts first, if there is a coverall or jacket over it, otherwise pants first. Here is my next step with these figures.

I like to paint shoes or boots a dark color, dark gray or dark brown. Here I used another Tamiya color, no. XF-63, “German Gray,” which I use lots of places I used to use Floquil “Grimy Black.” The brown pants are Tamiya no. XF-64, “Red Brown,” and the shirt is Model Master no. 1734, “Green Zinc Chromate.” I let every color dry well before adding another color. Here are the completed figures, each standing on its new base.

I mentioned repainting also. Sometimes a figure has a color you just don’t want to use. Below I show a Merten figure, on the left in a white uniform, with arm positions I felt desirable to change, and showed that change in the previous post. Here, in the photo at right, is the corrected figure in white, now painted with clothing. Note also here that the original “policeman’s hat” has been filed down to represent a cap. Still far from an ideal figure, but to my eye much improved. 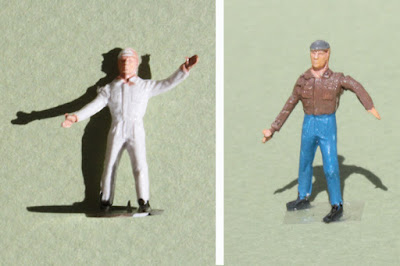 Let me sum up this way. My recommendation on figures has always been, and still is, that they are not that hard to paint, but be patient, use as small a brush as you have, let each color dry before adding another color, and count on needing to go back and touch up some spots.
This post has certainly not explored all the ways figures can be improved by painting, but I feel I have made the main points here. I intend to return to this topic in future posts.
Tony Thompson
Posted by Tony Thompson at 12:31 AM