In this post I want to continue with a discussion of modifying figures, this time talking about a little more extensive kind of change. Here’s why.
Some figures are posed with rather extravagant gestures, certainly gestures anyone might make on a specific occasion, but not very typical of how people usually look. I show two below, both from Merten sets, for which I wanted to modify the arm position, an easy change. (I also dislike the clothing colors, and will take up that topic in a following post on painting figures.)

As I said, these are candidates to cut and move arms and legs. I know this sounds dramatic, but actually it is pretty easy, and modeler’s putty can disguise any errors. I will show below modifications to the figure in white. In addition to arm position problems, the figure in red is wearing a hard hat, not really part of the scene in my modeling year of 1953. I simply file the overhanging sides and back of such a hat, and reduce the crown to a flatter profile. It is then easy to repaint as a denim or cloth cap or, if you also file off the brim in front, to repaint as hair color.
Here is an example from another set, of correcting a typical German railway worker’s cap, which to an American looks almost like a policeman’s or military officer’s hat. I simply file off the front peak of the hat, while reducing and rounding the shape of the crown, and finally painting as a cloth cap. The photo at left shows the cap, its profile evident in the shadow of the head, before much alteration, the one at right shows the final result. 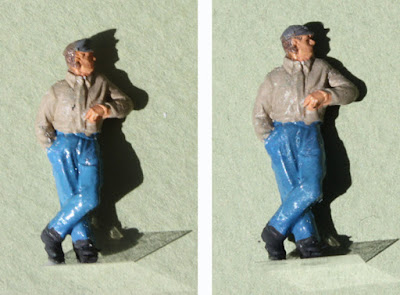 This happens to be an originally unpainted figure, that I painted to these colors. Painting of figures is going to be discussed in the post that follows this one, in this series.You may note that this figure is modeled wearing a necktie, but since I am not going to use it in a place where that is appropriate, I just painted it the shirt color.
Sometimes the body parts of a figure are a little unrealistic (giving rise to a passing thought that the figure designer did not quite get it right). For the figure in white, in the first photo at the top, the arms not only have an exaggerated pose but seem overlong. In re-positioning them, of course, it is easy to cut them down a little in length. I plan any angle cut on arm or leg to lie in the plane in which I want to rotate the limb, or the plane on the body to which I will re-attach the limb.
But in many cases you want to bend an arm or leg, or if that limb is gestured more than you like (the red figure in the photo above is an example), you need to make other changes. This in turn requires an awareness of how body parts change. I have learned a lot about this from a book on dioramas, published back in 1988, by a true artist named Ray Anderson. I show the cover below. 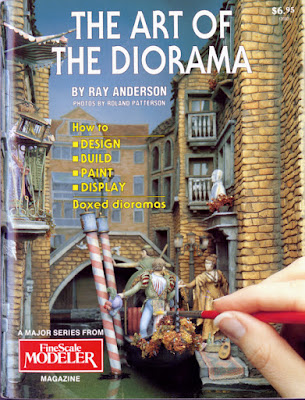 This is a Kalmbach book, drawn from articles in FineScale Modeler magazine, and has been out of print for some time. I recently have seen copies on eBay, however, if you’d like to find one.
One of the helpful drawings in that book shows how you can go from a static, standing figure to a figure engaged in more action. I show just a small part of that drawing below. 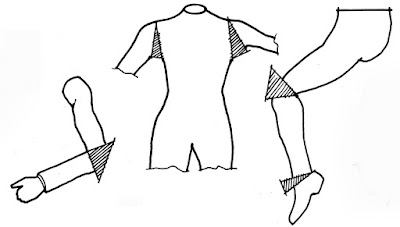 The drawing indicates changes to an arm, a body, or a leg that are the insertion of wedges of styrene, so that a straight limb, or downward arm on a body, can be adjusted into an action pose. Usually I find myself wanting to do the opposite, so I regard the drawings above as showing what to cut from an action-posed model, not additions I would make. Having a little experience with this process, I can say that it is actually pretty easy, and anyway, as I said, modeler’s putty covers a multitude of errors. Here’s that figure in white, with both arms lowered. 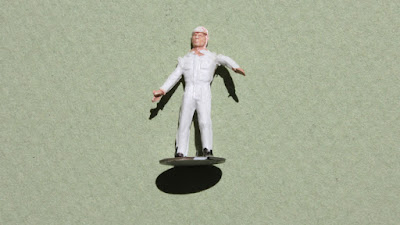 I will remove the molded base in favor of my clear plastic base, along with painting the figure. What you see in the photo above is just the factory paint.
I don’t hesitate to adjust figures if need be. Searching for that “exact right” figure you need may be more trouble than just modifying one you already have. And the ones you didn’t want to use because of their poses are likewise candidates for correction. That includes repainting, which I will take up in a following post.
Tony Thompson
Posted by Tony Thompson at 2:09 AM