When discussing freight car movements under such topics as waybills, car confiscation, and operations generally, the term “free-running” is applied to some cars. These are primarily box cars without special equipment or assigned service, and similarly gondolas and flat cars (provided they too do not have specialized equipment). When empty, these were available to be loaded anywhere, by anyone, if needed. So a shipper in Ohio could perfectly well load a box car from New England, or the deep South, or the Pacific Northwest, every bit as well as from a railroad with tracks nearby. (This may raise the topic of the Car Service Rules in some readers’ minds, and I will come back to that point, later in this post.) But cars could be sent anywhere.
Modelers tend to know about this concept, but don’t always grasp what it means. For example, it’s commonplace for a modeler to see a photo of, say, a Western Pacific box car in Richmond, Virginia, and comment something like “that car sure is a long ways from home,” or even say, “What’s that car doing in Virginia?”
The simple answer is that free-running cars went everywhere with loads, and could be reloaded wherever they ended up, once they were empty. Of course in times of slow economic activity, there might be a car surplus, and unloaded cars would mostly be sent homeward empty. But when cars were needed, which was most of the time, free runners were happily loaded by anyone, regardless of the geography.
One testimony to the truth of these statements is the Gilbert-Nelson hypothesis. Those two men showed, at least for bridge-route railroads, that the frequency of appearance in train records, of freight cars from individual railroads, simply reflected the relative size of those railroads’ car fleets, compared to the whole nation's fleet. (I have discussed this at greater length in a prior post, which can be found at: http://modelingthesp.blogspot.com/2010/12/choosing-model-car-fleet-2.html .) The Gilbert-Nelson idea can only work if cars really are free-running, that is, if they can and do show up anywhere.
I try in my own layout operating sessions to ensure that the largest railroad car fleets are represented in the freight cars on the layout. That means Pennsylvania Railroad, New York Central, B&O and Milwaukee, in addition to major Western road Santa Fe and home road SP. What is the basis for this? Shown below are the freight car fleet sizes for the biggest railroads, as I described in an article in Model Railroad Hobbyist  for December 2011 (read or download it at: mrhmag.com/magazine/mrh-2011-12-dec/ ). The fleets are shown minus the car types which interchanged less frequently, which means coal, ore and ballast hoppers. I discussed that point in the MRH article. 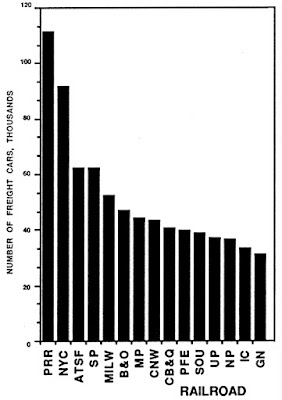 Another point to recognize is that there do exist data, remarkable in extent in some cases, to demonstrate how widely free-running cars could and did roam, taking on a wide variety of different loads in the process. A famous example was a advertisement by the Monon, documenting the first 12 months or so of travel by their new PS-1 box car which carried Monon car number 1. The ad appeared in Trains magazine for September 1948. Shown below are the two pages of the ad, first the map of the travels: 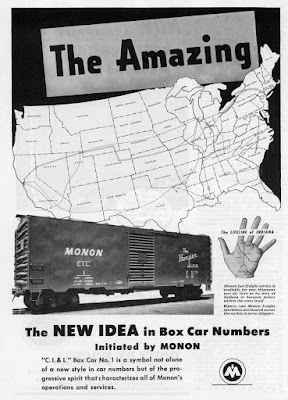 On the facing page was the actual record of travel, with dates and loads. Fascinating reading. You may wish to download this for easier reading (you can click on the image to enlarge it somewhat). 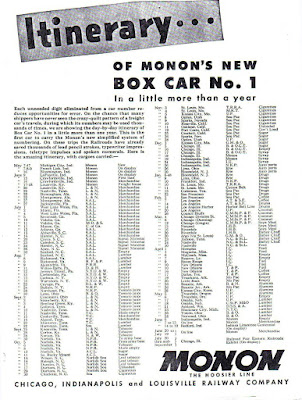 You can download the same list from its original on-line location at:  http://www.monon.org/documents/07-27boxcar1scedule.jpg .  The corresponding map is also available and for example, can be found at: http://www.monon.org/documents/07-27amazing1-5-8-48.jpg .
This was just a single box car, but there is certainly no reason to think it was untypical of the national fleet of free-running box cars. As modelers, we can take advantage of this reality by not only delivering loads on our layouts carried in cars of every railroad (with frequency perhaps guided by Gilbert-Nelson), but also by recognizing that those loads may be in cars from owners remote from the location at which the car was loaded. In fact, in support of the Car Service Rules (described in moderate detail in a prior post, at: http://modelingthesp.blogspot.com/2012/01/car-service-rules.html ), a very likely car owner for a load arriving from far across the country is in fact your layout’s home road. Yes, maybe that load would be in a car of the home road of the shipper, but there is also quite a good chance that it would be in a car of the home road of the destination consignee, or of a close neighbor of the home road.
You may of course operate your model railroad as you see fit. But if you are trying to model actual railroading, then this understanding of free-running cars and how they were used is essential to realistic operation.
Tony Thompson
Posted by Tony Thompson at 12:23 AM