By “figures,” I don’t mean numbers, and I don’t mean the shapes of men or women. I mean the miniature figures we put on our layouts. These relatively small objects carry a disproportionate weight in the appearance of any scene, simply because they remind us of ourselves, while they populate our miniature world, and I believe that careful attention to the “look” of model figures is a vital part of realistic modeling. What follows, I should warn you, is purely my opinion.
I have long been disappointed in the appearance of most commercial figures. In an apparent effort to generate huge variety, makers of figures have produced everything from tennis players and baseball players, to children running and oom-pah bands playing, and to such relative improbabilities on most layouts as ice skaters, circus clowns, couples dancing, and working firefighters. What we mostly need are just a few categories of figures: workmen at various jobs, ”civilians” in such roles as passengers or bystanders, and railroad employees. Practically everything else is fruit salad on the side.
In other words, I think we need ordinary people doing ordinary things. Here’s an example from Roger Nulton’s excellent S-scale layout in Tacoma, Washington (his wife is a major collaborator on scenes like this, all of which are quite well done). We don’t all have “town scenes” on layouts, but this photo depicts a natural-looking scene.(You can click to enlarge)

There isn’t a crowd here, but there are believable people who fit into the scene. Even the walking man at lower right is okay, because he appears to be walking slowly.
Of course I recognize that an particular layout may host a picnic scene, and thus need picnickers, or may include a church, and be able to use a crowd of funeral mourners or wedding celebrants, or have a mini-scene of road repair and be able to use highway workmen. And there’s that tired old favorite, the police or highway patrol car, pulling over a motorist. Any one of these (and many, many others!) might crop up on a layout, but hardly multiple examples of them — at least on serious layouts which try to portray actual railroading and the real world.
A further gripe of mine has been the “under-volume” figures often sold at bargain prices. These emaciated individuals might well serve in a hospital scene but are not very realistic otherwise, And most of them are posed in awkward and unrealistic poses anyway. And on that point, figures in real action, such as running, look fine in a photograph, where we are accustomed to motion being frozen in the instant of camera exposure, but a figure so posed statically on a layout looks very odd.
I admit I like and want to use figures on my layout, so I’ve spent literally hours poring through Walthers catalogs and picking through wall displays at hobby shops, looking for the occasional set that I can actually use. In this post, I will show a few of my findings.
So in what follows, I want to leave most of the negativity behind and address what is good and useful among the kinds of figures out there. Over the years, there have been excellent figures available from a variety of sources. The most familiar name is probably Preiser, and their painted figures are generally very good, even though for American modelers, so many of their sets are distinctly European. There have been others, too, such as the beautifully done figures from June’s Small World (of Mountlake Terrace, Washington), and the “Crowd Pleasers” from N.J. International. 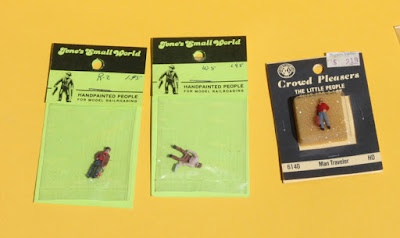 I have heard that the June’s line of figures had a business connection to Pacific Fast Mail, and of course both are gone today. But I have seen the figures on eBay.
For the “classic modelers”  out there, I should mention the fairly ancient Weston figures (produced by Campbell Scale Models). They are metal and several of them are useful, even though many of them tended toward rather static or wooden poses (the conductor figure in particular appears mummified). I have a  number of the Weston figures, and just show two below which have some potential. 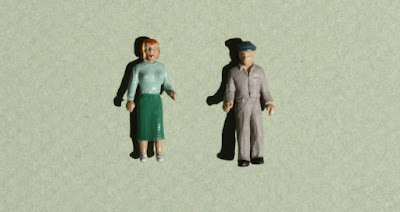 Long-time hobby shops sometimes have these in stock, and they show up on eBay.
The figure on the right, above, cries out to have some of the clothing repainted — unless he is posed as a filling station attendant.The left figure, called “Sweater Girl” by Weston, is indeed busty as would go with the period name, but of more interest is the skirt length. This is a 1940s look. It would be as out of place on a 1960s layout as would a mini-skirted figure in a 1940s layout.  This is a warning that not every figure set commercially available would be a good idea for your layout.
Recently, Woodland Scenics has introduced a wide range of very good figures. Some of them are exactly what I like. I have noticed in a couple of hobby shops that the Woodland Scenics display always has the peg for set A1859, “Train Mechanics,” empty. Now I know why. I finally found one of these sets for sale and immediately bought two. I am delighted to be able to use every figure in this set, unlike so many where a couple of figures don’t really make any sense on my layout. This is their package label, which has an artist’s depiction of the figures. Notice there are six figures but the label says “7 pieces.” The red toolbox is a separate piece.

These figures come with no base, and that is fine if you plan to glue them in place on the layout. I do glue some figures, but most of mine, I prefer to be able to move around. In a following post I will show what I do to make that work, and I will also add some comments on modifying figures for specific uses.
There have been lots of other sources of figures beside the ones I’ve mentioned here. I myself have lots of Merten and Faller sets and a variety of unpainted figures for which I no longer remember the origin. But I’m not trying to do a comprehensive review here, just mentioning which ones I find to be of interest in light of the goals I described. I hope that in presenting more about my approach(es) in future posts about figures, that I will provide some ideas of use to others.
Tony Thompson

Posted by Tony Thompson at 9:46 AM