In the previous part of this series, I described the prototype rules and usage for blue flags, and showed a number of examples (the post can be found at: http://modelingthesp.blogspot.com/2017/04/blue-flags.html ). The present post is about modeling these flags.
The first decision to make is what style of flag to make. The portable kind that clamp to a rail, described in Part 1, have the advantage that they can be placed anywhere. But most if not all the locations I would use blue flags on my layout would be predictable locations, so I decided to model the between-rails style. One could simply drill holes between ties here and there, but I decided I prefer to use tubing in the holes, so that those mounting points are dependable and the right size. I did not invent this idea, but have seen other modelers with tubing set into the track on their layout to serve as a blue flag receptacle, and I thought I would do the same.
An even more important point, perhaps, is a source of the lettering for the flags. As it happened, I had a starting point. Some time back I acquired a sheet of blue flag decals from DM Custom Dccals of Manitowoc, Wisconsin. I don’t know if they still offer these. But they enabled me to start thinking about making up a bunch of blue flags for my layout. I wanted them to be sturdy, so chose brass as the material to make them out of.
I selected K&S brass sheet, 0.016-inch thickness (their no. 252), for the sign; 0.022-inch brass wire for the staff (Detail Associates no. WR 2507); and 3/64-inch tubing (K&S no. 815036) for the sockets on the layout. This tubing is a slip fit for the staff and easy to manipulate. I cut a strip of the brass sheet, then divided it into rectangles of approximately the right width. The blue flags are slightly oversize to fit the decal lettering I had. The individual signs were then soldered to the wire staff. 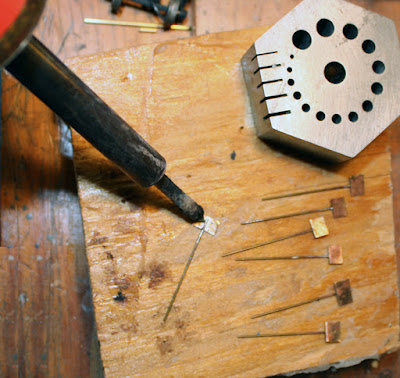 This makes quite a sturdy blue flag, which is what I wanted. These will have to stand up to repeated handling, and perhaps occasional collisions with locomotives or rolling stock.
I first cleaned, then spray painted the signs with gray primer (this is a suitable color for the staffs and back of the signs anyway). I had an old bottle of Floquil “Amtrak Blue,” which seemed like an okay color for the blue of the flag. But had I not had any suitable blue color, I could easily mix some up, starting with white and adding blue to it until it looked all right, somewhere around medium blue. You want the white lettering to stand out. I went ahead and brush-painted the sign fronts. Here are the ten I made, stuck into a piece of foam to be painted.

Next came application of the decals. The DM set I had was nice in that it had a whole bunch of flag legends, but the bad news is that there are no two alike. But I decided that was okay, since industries at different locations might have chosen different legends anyway. Shown below are the lettered flags, after a coat of clear flat was sprayed onto them. (You can click on the image to enlarge it.)

The next step was to create the in-track tube locations on the layout. I simply drilled a no. 56 hole, about a quarter-inch deep, wherever I thought I might use a blue flag under some circumstance, and inserted into each hole a quarter-inch length of the 3/64-inch tubing. (I cut the tubing lengths with a cut-off disk.) Glue doesn’t seem needed, though I could always go back and add glue. These locations are pretty invisible without a flag, so I have added an arrow to indicate this one. 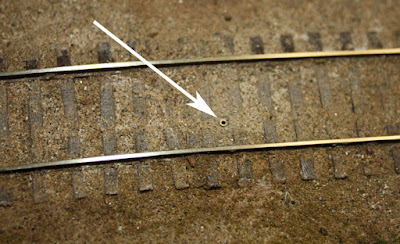 Inserting the flags is easy by hand. I thought I might need tweezers, but it works fine by hand. I think they look great, but already can imagine someone in a busy op session driving an engine right over one. Note to self: warn crews carefully.
The photo below shows a flag in use at my Union Oil dealer. The flag reads, “Danger Tank Car Connected.” 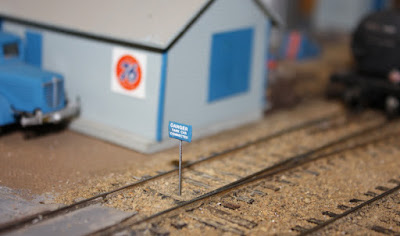 It has been fun to figure out how to make these blue flags, and I am looking forward to them as elements of operating sessions, as well as merely as scenery.
Tony Thompson
Posted by Tony Thompson at 10:07 AM