I host several operating sessions a year on my layout, with the number varying from year to year. I have often shown photos from those sessions in posts to this blog. But yesterday afternoon, I hosted one that for me was a little different than any of the preceding ones. It comprised the usual four operators, formed as two two-person crews. But I had made a number of changes to industries switched (a couple were switched for the first time) and to patterns of switching at some established industries. This was also the first session for local Bay Area folks in which my sizeable industry at the town of Ballard, Pacific Chemical Repackaging, would be fully operational. (To see the way it used to be, with essentially only an inverted kit box serving to represent the industry, look at the first photo in my post from February, which is at this link: http://modelingthesp.blogspot.com/2017/02/a-chemical-repackaging-business.html .)
Here’s a view taken during the session, with switching underway in the foreground (coincidentally both the locomotive and the caboose of the branch local train are visible here). 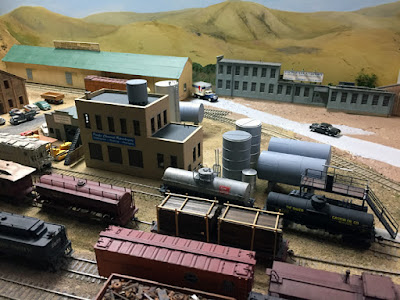 Both the PCR building, at left center of the photo, and some of its tankage, can be seen here, and this is a considerable advance, at least in my mind, over the former kit box representation.
One of the crews comprised Doug Smith (at left) and Richard Brennan, seen here planning a run-around move at Shumala. They were a careful and thorough crew all afternoon. 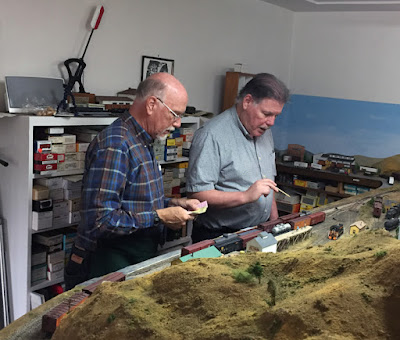 Meanwhile, on the other side of the layout at Ballard, John Rodgers (at left) and Ray deBlieck were also hard at work. They were really efficient with the workload they were given, even though, as I said, patterns of switching from previous operating sessions had been changed. 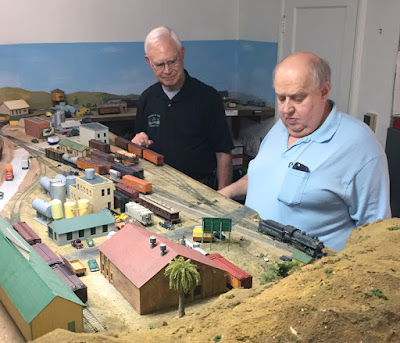 Another facet probably not evident to these crews, all experienced operators, is that I had altered a number of the waybills to conform to my current ideas on waybill content and management. But these changes too were taken in stride in this session, something encouraging and gratifying to me. The best kind of operating session for the layout owner is not only when things go well, but when improvements (hopefully they are improvements) can be introduced, and those changes fit in seamlessly, with operators working right through them. With all that going on, I really enjoyed hosting this session.
Tony Thompson
Posted by Tony Thompson at 8:55 AM