In a recent series of posts, I showed my steps in creating an industrial structure for my layout, which was modified from a Design Preservation kit of a brick building, to try and represent a stucco exterior. (The post about the stucco part can be found here: http://modelingthesp.blogspot.com/2017/03/chemical-repackaging-part-2.html .) I was happy with how the structure turned out, and have been thinking since about good and not-so-good ways that a modeler might represent stucco.
The basic idea for what I did was not original with me. In fact, Richard Townsend was really responsible for what I did, not only remembering and mentioning an article by Kathleen Renninger, from the November 2001 issue of Model Railroader, page 104,  about applying a stucco-like coating to a brick building. He also was kind enough to send me a scan of the article, entitled “Hitting the Bricks with Stucco.” I went ahead and tried Renninger’s technique, using vinyl spackle instead of the drywall compound she used (I think either one could work just fine). I mentioned all this in the post about the structure, as cited in the preceding paragraph.
I have since had conversations with several modelers, both in person and on-line, about the issue of how best to represent stucco. Some people focus on the fact that most stucco is very rough when seen up close, though of course a texture on that scale is going to be invisible at 1:87 or thereabouts. I know of modelers who have covered structure surfaces with sandpaper in an effort to capture that small-scale roughness. It’s an interesting idea, but to my mind it still isn’t going to work. If you can see the texture at all, I believe your sandpaper is too coarse (neglecting for the moment the issue of whether the surface is painted or not).
Instead, I believe, at least in HO scale, that the scale of stucco roughness that is familiar to us on prototype structures should be ignored, and that we should instead try and capture the much larger scale irregularities also present in prototype stucco surfaces. That is what I did on my model, about which more in a moment. But first, let me show a few photos of what I mean.
I have often noticed the kind of prototype irregularities just mentioned, and decided to try and photograph them. They are most evident in glancing sunlight angles, and I was able to find a number of examples right in the area of Berkeley where I live. Below is one such. 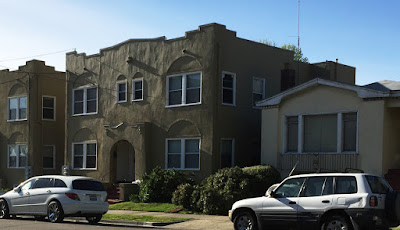 This is an older apartment building, likely dating from before World War II by the architecture, and clearly with irregularities over its entire front.
A second example is from a much newer building, and in this case the lighting only showed the texture in one area, though up close it could be seen over most of the stucco surface.

As a last example, I show a smaller area, small enough that the local roughness I mentioned above is evident, but my interest here is in the surface undulation, which is what would be visible in HO scale. 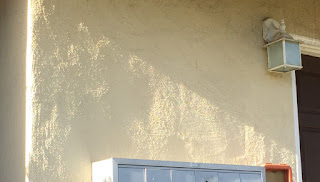 These examples were of course photographed with a light angle which made them quite evident, but usually these features can be seen in any bright light, just difficult to photograph except in glancing illumination.
The model I built has some of this character, though not deliberately introduced. Instead, I applied the spackle covering to the structure and intentionally did not try to accomplish perfectly smooth surfaces. The result was indeed some irregularity, as you can see on the end wall below, though, like the prototype examples above, it’s really only visible in glancing light. (You can click on the image to enlarge it.) 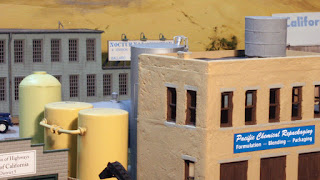 I think the general problem of how to model a stucco building remains an interesting challenge, but I am happy with what I was able to accomplish with my model for Pacific Chemical Repackaging.
Tony Thompson