As is common with freight car projects which involve assembly in China, the announcement by Broadway Limited of new 6000-gallon high-pressure tank car models in HO scale appeared some time back. Then, as is also common, the announced arrival time was moved back a couple of times. But they are now here, and believe you me, the wait was worth it. I received the four cars I had wanted, via a dealer who broke up the inconvenient “four-packs” in which Broadway chose to market the cars.
These are beautiful models and are certain to be warmly received by knowledgeable modelers. We finally have a high-pressure tank car other than an LPG car with a correct-size valve bonnet and dome platform. (Incidentally, the dome platforms are floored in wooden planks, as was standard practice until steel grid was required for new construction, starting in 1948; retrofitting of older platforms was not required.)
One thing to recognize with the cars is that the capacity in gallons is not marked on the car ends of the models that were produced with multiple car numbers. The gallonage marking was usual though not required. Clerks could readily look up the actual capacity in the Tank Car Capacities Tariff, which I have reviewed previously (see my post describing how to obtain it, at: http://modelingthesp.blogspot.com/2016/12/the-tank-car-tariff.html ), I will give examples below.
Perhaps Broadway omitted end gallon markings on the multiple-number models because each one should have been different! A car I received produced in a single number does have the end gallonage marked — and the Tariff shows it’s the correct value. One might think that the need to print different end numbers on the multiple-number models could have included printing the different gallonages. In any case, modelers who care can add decals for the end markings.
Here is one of the cars I chose. The well-known chemical concern Penn Salt (the Pennsylvania Salt Manufacturing Company) had a subsidiary in Washington state, called Penn Salt of Washington, located at Tacoma, and with separate reporting marks TELX (maybe for Tacoma ELectrochemical). The capacity of this car, TELX 224, was 5849 gallons, as listed in the Tariff.

And here is a closer-up view of the very nicely done valve bonnet and planked platform: 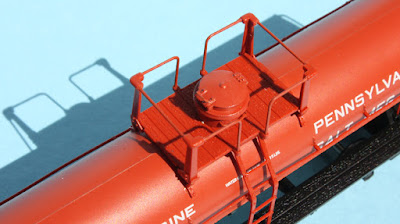 Two of the cars I chose were the Columbia Chemicals and  Columbia-Southern cars. The background and history of these company names was summarized in an earlier blog post (you can read that post at this link: http://modelingthesp.blogspot.com/2012/07/thomas-industries-tank-cars-update.html ). In brief, in 1899 Pittsburgh Plate Glass established a subsidiary, Columbia Chemical, to make soda ash, a component in glass-making. The soda ash process also had chlorine as a by-product, so Columbia sold both. In 1931, Pittsburgh Plate Glass or PPG formed another company, Southern Alkali Corporation, as a joint venture with American Cyanamid (in 1951 PPG acquired all of Southern Alkali). Around that same time, PPG combined its Columbia and Southern Alkali subsidiaries as Columbia-Southern. (In later years, that company would become a component of the Chemicals Division of PPG.)
Both Columbia and Southern Alkali had owned tank cars to move their chlorine to market. The Columbia cars used the predictable reporting marks, PPGX, while Southern Alkali cars were initialed SACX. After the two companies were merged, it appears from Official Railway Equipment Registers that cars retained their original reporting marks, and the respective rosters did not change much over time, indicating little effort at re-initialing the SACX cars. Instead, most of the PPGX cars appear to have been disposed of, particularly their numerous, older 40-ton cars. By 1958 the Columbia-Southern roster was dominated by the SACX mark.
The Broadway Limited models mirror the above history. As an example, here is SACX 680, the Tariff capacity of which was 5927 gallons:

Another beautiful model, with superb lettering and the same excellent details.
I look forward to waybilling these cars and including them in future operating sessions. Broadway Limited has provided a very much needed model for those of us who like tank cars.
Tony Thompson
Posted by Tony Thompson at 11:58 AM