In photos of Southern Pacific work areas around steam locomotives, such as garden tracks, one usually sees a few small carts. These likely contain tools or  materials or spare parts, and because there rarely are two alike, I assume these are homemade in a shop. To illustrate, I show below a detail from a Richard Steinheimer 1950 photo at Taylor Roundhouse, with three carts in the view. 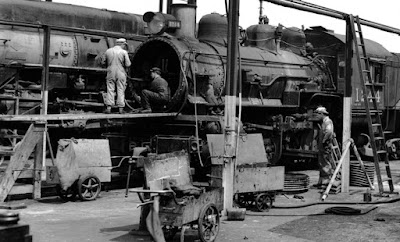 Each of the carts is a different size and shape, though all have a single pair of wheels (some photos show four-wheeled carts too). I decided to model a couple of these carts.
To build a small cart, my approach was deliberately as simple as possible. Looking at prototype photos, carts appear to be three or four feet long and maybe two or three feet high. I decided to use styrene strip, and it looked like about 1/4-inch square would be a good cross-section. I didn't happen to have any Evergreen strip that size, so glued together two pieces of 1/8 x 1/4-inch strip. I made it three HO scale feet long.
Next I needed to add wheels. Well, these wheels need not rotate, so can be approximated instead of accurately modeled. I took some 3/16-inch styrene tubing (Evergreen no. 226) and sliced off some pieces with a razor blade, quite quick and easy. I found it a little tricky to get fully parallel slices, but this goes so fast you can just keep cutting till you get enough for your project. I cut a whole bunch and rejected almost all of them, but probably did not consume as much as half an inch of the tubing. If one wanted larger wheels, of course, larger diameter tubing could be used.
I wanted to avoid a real wheel center, so merely glued each tubing slice to the rounded end of some Evergreen scale 2 x 12-inch strip. This would look like the inside of the wheel, and would also be an attachment piece for the wheel assembly to the body of the cart. The photo below shows a cart at this stage, with one wheel added, and the second wheel on its backing strip. Note at the top of the photo, four additional tube slice of varying thickness. 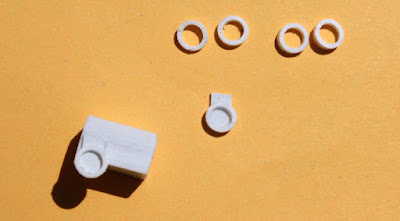 In addition, I wanted to model the kind of handles often seen on these carts, which are made to facilitate lifting the non-wheeled end of the cart to move it. Using a half-round file, it was easy to make an approximate shape of the right kind. The material used was Evergreen scale 1 x 6-inch strip (no. 8106). Here is how it looked when attached to the cart.

The cart shown above has its axle at one end. Axles more in the center of the cart were more common, doubtless easier to lift and move. I decided to make a cart like that to accompany the one just illustrated. In some photos, one also occasionally sees four-wheel carts, so I decided to include one of these too. All materials were same as for the first cart, just modified for the different arrangements. Many prototype carts had end handrails for lifting and pulling, so I decided to add those to the additional carts, in the form of brass wire.
Last, I assembled a pewter cart from a kit by BEST (Bollinger Edgerly Scale Trains; you can visit their catalog at: http://www.besttrains.com/products_4-0000.html ), which I liked because it has much larger spoked wheels, visible in some of the SP service area photos. It is also an open-top cart. Here are all four: 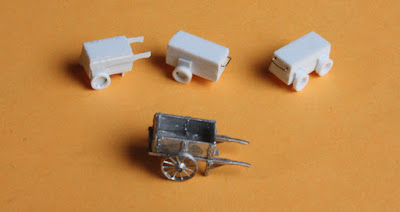 Color images from the steam era that show repair facilities are scarce, but I know of at least one cart like this that was orange (the color of much SPMW small equipment in that era), and one that was gray. A retired SP machinist told me he had seen both orange and yellow ones, along with gray. I decided to mostly do gray, and began by spraying all the carts with gray primer. I went back and painted the tires dark gray and one of the bodies a dirty orange.

It has been fun and interesting to research and build these work carts, which are so very evident in SP shop and service area photos. I will be able to use them at my Shumala fuel and water facility, and around my roundhouse and shop.
Tony Thompson
Posted by Tony Thompson at 8:13 AM