For some years, there has been an industry on one of the sidings in my layout town of Ballard which didn’t have a building, just an inverted kit box with a sign, and a couple of tanks. It is labeled as Pacific Chemical Repackaging, and has looked like this: 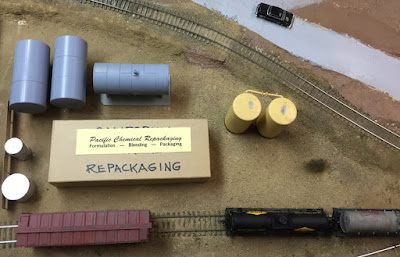 I have occasionally had visiting modelers ask, what the heck is this? So in today’s post, I want to expand on what this business is, as well as indicate where the layout site is going.
Actually, chemical repackaging is a widespread business type, found all over the United States, though not often included in model railroads. What kind of business is it? The core business is to take a bulk chemical, and package it for distribution. For example, a solvent might be purchased in tank car lots, and then packaged into gallon containers for sale. Some repackagers also offer manufacturing and decoration of the final containers. In addition, when a company changes its name, or its corporate appearance, there may be an old stock of products that needs to be put into new packages. Naturally the repackager is expected to be competent to handle dangerous materials, whether flammable, corrosive or otherwise noxious, in a safe manner.
In addition, a repackager may work to blend, formulate or compound new materials from suitable raw materials. For example, paint thinner is sold in a variety of compositions, and a repackager should be able to make up a desired formulation and also get it packaged. Again, the raw materials may arrive in tank cars if liquid, in covered hoppers if solid, or in intermediate packages such as sacks or drums, likely in box cars.
If one searches on the internet for this type of business, a great many will be found in most areas of the country. They vary widely in how large are the quantities they can handle, or if they specialize in solid or liquid materials, or in specific classes of chemicals. They vary in what kinds of containers they are equipped to fill, from cans and bottles, to jugs, pails, bags and drums, and whether they can put packages in cartons, otherwise package containers, or put them on pallets. They also vary in whether they can print, label or otherwise decorate packages. But at core, they handle putting materials into packaging. Here’s an on-line photo of typical packaging that can be accommodated. 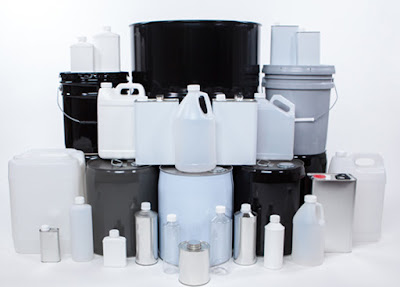 These would probably be assembled into cartons or equivalent for shipment.
This seemed to me a good model industry, as it can receive tank cars as well as box cars and, if suitably equipped, covered hoppers. Shipping out would be mostly in box cars, though one could imagine situations in which a blended or formulated material could be shipped out in tank-car lots.
Such a business could have a range of sizes of buildings (many do not have particularly large buildings), but could well have a lot of tankage, perhaps multiple tanks of the same size or, equally likely, a motley collection of sizes and shapes of tanks for handling all kinds of quantities. If one likes modeling piping, this would be a great opportunity for lots of exposed piping. (As one example of a starting point, Walthers offers a Refinery Piping kit.) On-line photos of repackaging companies, however, show many with the material storage inside the building(s). My choice is to install a moderate number of tanks.
The business of this type on my layout now needs to be made more complete. As the photo above shows, I call it “Pacific Chemical Repackaging,” and it has operated for awhile with only the dummy building seen in the photo, and a few storage tanks alongside. Now I want to install a proper building for this industry, and organize the tanks.
I searched through my stash of structure kits, and in particular tried to assess what might fit into the space on my layout, leaving plenty of space for storage tanks, of course. I chose an old kit from Design Preservation, their kit 103, called “Cutting’s Scissor Co.” It has the disadvantage that it is a brick building, not the most common building type in California, but if painted to represent a brick color other than brick red, it would be less distinctive.
Part of this structure is two-story in height, and I know from experience that it is helpful to provide some kind of interior view block between floors. Accordingly, my first step was to glue some styrene strip horizontally inside the building, to support a floor. I used Evergreen 1/8-inch square stock.

The clamps here are reversed clothes pins, a favorite tool of mine for almost-parallel clamping.
Once that floor support is installed, I went ahead and assembled the building. Before installation of roof pieces and painting, I wanted to judge how well it fit my layout site, and how much room there would be for additional tanks or auxiliary structures, along with a possible access road. Here is a photo of one arrangement.

This industry is an interesting one, and because it is a destination for chemical tank cars, which I happen to like, it’s a nice addition to my layout. I will show completion of it in a future post or posts.
Tony Thompson
Posted by Tony Thompson at 11:51 AM