Most years I attend the Railroad Prototype Modelers fall meet in suburban Chicago (a meeting long known as “Naperville” for the then-site of the convention hotel, now called “Chicagoland” since it moved to a hotel a quarter of a mile away in the adjoining town). A highlight of these trips is a chance to operate on Bill Darnaby’s excellent layout, the Maumee Route. A couple of years ago, I filled the Yardmaster and Hostler jobs on the Maumee, and one part of hostling was the insertion of HO-scale white flags into flag stanchions on locomotives of extra trains. (Use of such flags is usually described in prototype rulebooks under Rule 21.) I thought it was a delightful touch of detail. Here is a photo of one of the Maumee engines, borrowed from Chapter 5 of Tony Koester’s book, Model Railroading from Prototype to Layout (Kalmbach  Books, 2010). The white flags look great.

On returning home from these trips, I thought, more than once, “I’d like to do those white flags on my layout.” Finally reaching the point of action, I began to browse my various sources of SP prototype photos to see how the flags looked, and quickly realized that there weren’t any. The answer must lie in the SP version of Rule 21, I thought to myself, and therefore looked at my 1943 and 1951 SP rulebooks to see how Rule 21 was presented.
Turns out the answer is interesting. Here is a slightly abbreviated set of rulebook pages, setting out the SP version of Rule 21. (You can click to enlarge.) 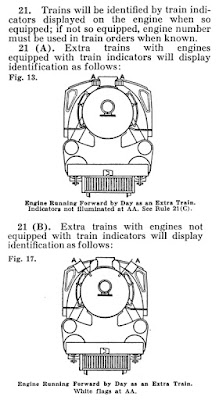 I have omitted the details for engines running backward, etc. Rule 21(B) clearly shows that the only trains which would display white flags are those powered by engines that had no indicators. Indicators were entirely standard on SP steam, so lacking them would an unusual situation except perhaps for leased locomotives.
Rule 21 in the SP version clearly means that the indicators (often called “number boards” by modelers and railfans) were relied upon to designate extra trains, just as they were relied on for identification of all other trains. This is made more explicit on the page for Rule 21(C): 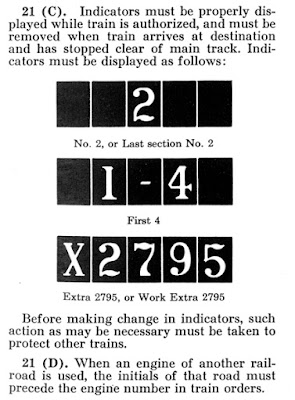 This foray into the SP rules means, of course, that I am not going to have white flags on my SP locomotives. Still, my models do have indicators and will continue to display (as they now do), the engine number plus an “X” as depicted in Rule 21(C). Here’s an example, on Mikado 3251: 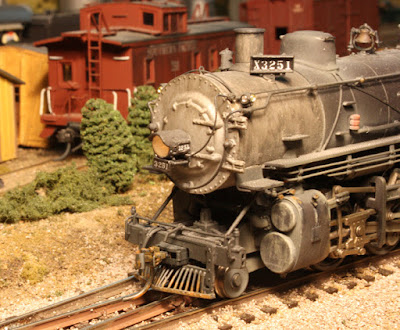 Note the headlight is illuminated, as SP Rule 17 required after World War II.
In a way I am disappointed not to be able to carry white flags on the extra trains on my layout, but at the same time am glad to have learned the SP rule and what it means. And my operators will be able to avoid the rather fussy task of putting HO scale flags into stanchions!
Tony Thompson
Posted by Tony Thompson at 8:50 AM