The Operations Special Interest Group or OpSIG has just published an outstanding book about prototypical operating practices and how to implement them on a model railroad. Its full title is A Compendium of Model Railroad Operations, but many are already referring to it simply as Operations. It can be purchased on their website at: http://www.opsig.org/OPSigBook2.pdf .
Shown below is the cover. The authors are a “who’s who” of model operations authorities, from Jim Providenza and Seth Neumann to Steve King, Brian Lundberg, Dave Clemens, Mike Burgett, Byron Henderson, and others. The ringmaster who brought it all together and edited the book is Phil Monat (who also contributed a chapter), together with his co-editor, Steve Benezra. 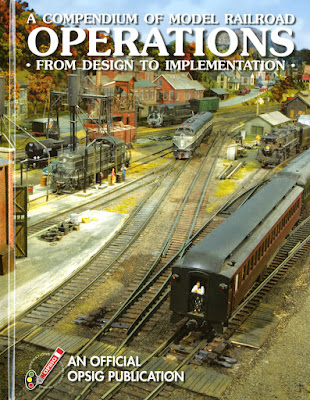 I must confess to a small personal role in the project, as some of the authors, as well as editor Phil, called me for photos they could use, and you will see a few images contributed by me in the book.
This is really an outstanding collection of articles, one that goes far beyond anything previously published in this area.  The pioneer book for many of us was Bruce Chubb’s comprehensive volume, How to Operate Your Model Railroad. That book was succeeded in the Kalmbach stable by Tony Koester’s two editions, both entitled Realistic Model Railroad Operation ( I reviewed that book in a previous post, at this link: http://modelingthesp.blogspot.com/2014/03/tony-koesters-recent-operations-book.html ), though Tony’s books. limited in length by Kalmbach marketing goals, are less detailed than Bruce’s book. I often advocate that beginners need both books. But this new OpSIG book carries things to a far more advanced (and thus interesting) level.
Incidentally, this is the second book published by OpSIG. The first, “19 East, Copy Three,” is about timetable and train order operations. I have mentioned it in previous posts (for example, in my 2013 post at: http://modelingthesp.blogspot.com/2013/09/setting-up-operating-session.html ). The first printing of that book sold out, but it’s been reprinted and is also available for purchase at the OpSIG website. It is a superb complement to the Operations book just described, and I recommend it highly. Here is its cover. The new program of the OpSIG to publish operating information in book form is greatly to be commended. I am impressed at the ambition and successes of the program so far, and will look forward to what they can do in the future. And if you have any serious interest at all in model railroad operations, you definitely need to buy A Compendium of Model Railroad Operations.
Tony Thompson
Posted by Tony Thompson at 10:29 AM