During much of the month of May, my wife Mary and I were traveling through Japan, starting in Tokyo and seeing much of central Japan, including the Japanese Alps, and then heading south and west to end our trip on the island of Kyushu, at Fukuoka. The long-distance and even some local travel was by train. That’s what I want to write about in this post.
The bullet-train system of Japan, the Shinkansen (which just means “new trunk line”), has been around more than 50 years, with the first trains entering service in 1964. So it’s not exactly a new idea, but the Japanese have continued to innovate, improve, and increase speeds. Those are reasons the Japanese continue to be leaders in much of this technology.
We first rode the oldest of the lines, the Tokaido line, which connects Tokyo and Osaka. Though it initially operated at 125 miles per hour, its speed has been progressively increased, with the current N700 trainsets normally running at 180 miles per hour.  Naturally these are now far more aerodynamic than the 1964 trains. Here is the end unit on an N700 trainset (both ends are the same). 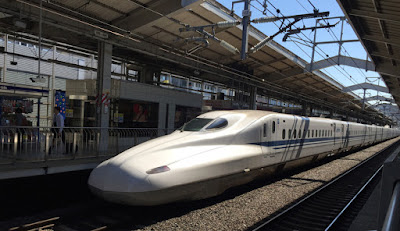 Perhaps the most surprising aspects of all these train are the passenger densities. They are very high on most lines, with the Tokaido line remaining the busiest, carrying more than 150 million passengers per year. At the busiest times of the day, morning and late afternoon, there are 13 trains per hour on this line alone, little more than 4 minutes between trains. These are 16-car trains, with 1323 seats per train, and it is indeed dramatic to witness the very rapid boarding and exiting of passengers. Here is a shot of a couple of the 16 cars in an N700 train. 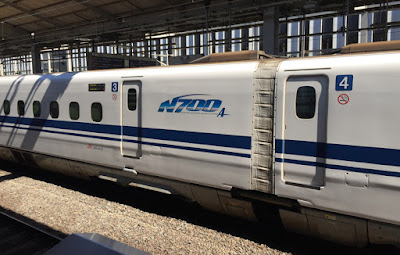 Of course Japan is not all Shinkansen trains. First of all, there are shorter routes of all kinds, along with local train service. The vast majority of Japan is still the 42-inch gauge recommended originally by British consultants when railway construction began in Japan (this gauge is rightfully called “Empire gauge” for its prevalence in many parts of the former British Empire). But the Shinkansen lines, specially constructed for the very high speeds, are all “global standard gauge” (4 feet, 8.5 inches). We rode a bunch of these local trains too, in many different areas. For example, here is the very nice “express” we took from Takayama to Kyoto. It was a six-car train, ad though most of Japan is electrified, it is diesel-powered. 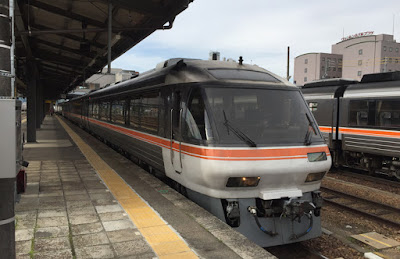 The cars were a very familiar size from U.S. practice, 68-seat coaches, 17 rows of 2 + 2 seating. Like all the trains, they were clean and comfortable, and with very adequate leg room. 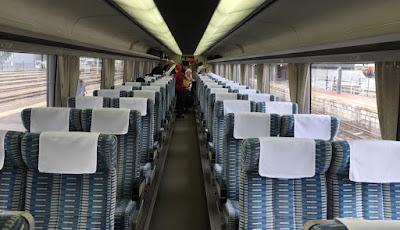 Probably among the most impressive things about Japanese railway travel is the number and length of tunnels. It’s a mountainous country, and every line we rode had tunnel after tunnel. The sheer investment is daunting. No wonder that tunneling is another technology in which the Japanese are leaders.
The biggest cities, like Tokyo and Osaka, have “heavy-rail” commute services mixed in with subways. In Tokyo we rode the Japan Railways lines several times, and these were less crowded than the subway (at least when we rode the two modes). Here is such a train. In the lower right corner you can see the JR emblem. 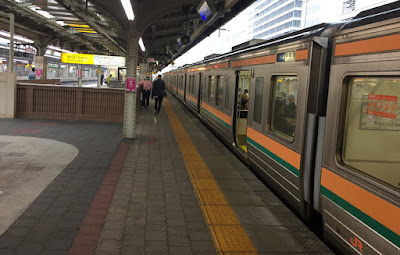 The railway system in Japan was formerly government-owned and operated, under the name Japanese National Railway (JNR). Since 1987, however, it has been privatized into seven companies, but they adhere to strict rules on maintenance, operating practices, and cooperation, and are collectively known as the Japan Railways Group companies, all branded as JR.
Most Japanese cities of any size have replaced their streetcars with subways, but there are exceptions. For example, here are typical streetcars in Hiroshima, modern and fairly quiet cars. 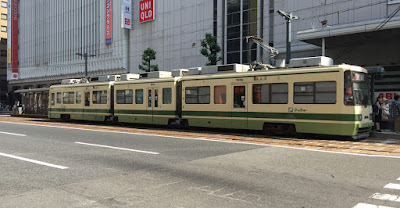 Putting it all together, trains are really excellent transportation in Japan, fast, frequent and not excessively expensive. The only drawback for the traveler, as opposed to the commuter, is that hardly any trains have provision for luggage. The overhead racks are not large, and there usually is no luggage section at the end of cars. But all in all, we really enjoyed our train experiences in Japan.
We also visited a superb railroad museum in Kyoto, which I will describe in a separate post.
Tony Thompson
Posted by Tony Thompson at 10:14 AM