An operating session with upgrades

I have been modifying the operating scheme I use on my layout, to add more realistic car movements and also to create more complexity in a few places. As visiting operators become familiar with the layout and its original simplified scheme, the operators have finished the sessions in less and less time. I therefore decided to remove some of the simplicities and see how it would go.
But as happens all too often, in testing the various layout areas before the op session (once track is cleaned, I usually operate locomotives through all switches and sidings to ensure everything works properly), I found some problems. One was a dip in the track, the other two were areas where track gauge was too tight. Most of this track has been in place for years, and all three problems were new. I couldn’t help but remember the often repeated observation of Jim Providenza, who has hosted operations on his layout for many, many years: “Track will move around and change gauge. It happens. Layouts aren’t stationary.” He is of course right, and I am only one of the many who can validate his comment.
Naturally I tried before the sessions to correct the problems I found, but was only partly successful, as the sessions would soon demonstrate.
On June 10 and 11, I hosted the same operating session each afternoon. The operating scheme part of all the sessions went well and I had the impression that the changes that I had made folded smoothly into the overall operation. On June 10, the two crews were Seth Neumann and Mark Schutzer, and Bob Osborn and John Sutkus (seen below at Ballard, with John at left). All four are very experienced operators on numerous layouts, and I was confident they would be able to  handle all the changes. They did. 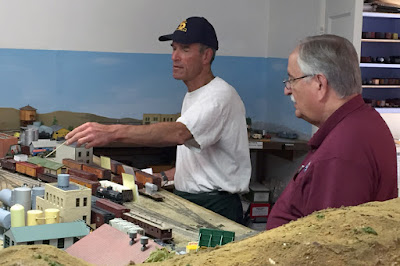 The second crew is shown below as they worked at Shumala; Seth is at left and Mark at right. They found a couple of my track problems (I had fixed one successfully the night before the first op, but the others remained). 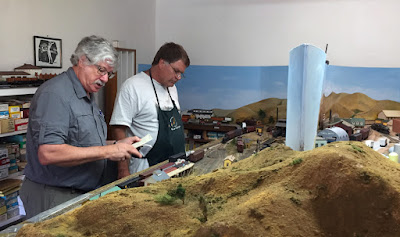 After the June 10 session, I worked late in the evening to try and fix a tight-gauge problem at Ballard, and though I made it better, there remained an issue with the rails not being quite all in one plane right at the points of a switch. All I could do was warn the crews on the 11th to watch the locomotive running through that area, and they did indeed have frequent problems there. On this day, one of the crews, shown working at Ballard, was Pat LaTorres (at left) and Ed Slintak. 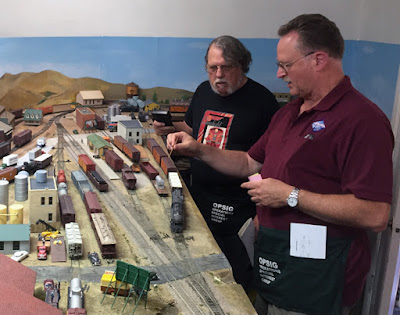 The other crew on Sunday were Jim Radkey and Jon Schmidt (Jim is at left below, as they take their turn to switch at Ballard). Jim was a last-minute fill-in for someone who wasn’t able to attend, so I appreciate Jim’s willingness to join the operating session on short notice. 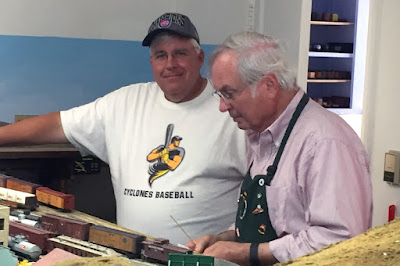 I have been working on the Ballard track issue since the op session, and as solutions (hopefully) develop, I will write a post or two about them, if anything in the solutions is of general interest. I am also trying to avoid falling victim to what Paul Weiss calls “Host Flaw Hysteria,” in which a host imagines a small flaw in an operating session to expand so large as to eclipse everything that went well in the session. I know all these operators enjoyed most of their work in these two sessions, so I will try not to feel excessively disappointed about a couple of track problems. But I still need to get them fixed.
Tony Thompson
Posted by Tony Thompson at 3:26 PM