Beer as an industrial commodity

Those who have followed this blog for awhile will know that my layout includes two shippers of wine grapes and wine, products that fit into the area I model. As background for those who might not understand how the wine business works, I wrote a blog post, with a title parallel to the present title, some time back (to read it, go to: https://modelingthesp.blogspot.com/2012/02/wine-as-industrial-commodity.html ). I have also included commercial wine information in a clinic I’ve given several places recently, on wine tank cars.
I have no reasonable way to do anything similar for the beer business, or even for the ingredients that go into it, in the area I model. But that doesn’t rule out depicting shipment of those ingredients, nor the by-products of beer making. I can identify a couple of these, as I will now describe.
As we know from the classic German beer purity law of 1516, real beer is made from just three ingredients: barley, hops and water. (Never mind our friends at Anheuser-Busch, who use immense quantities of rice.) Today, even in Germany, a fourth ingredient is in use: yeast. Centuries ago, the fermentation of beer was allowed to proceed with airborne wild yeasts, whatever might happen to land in the fermentation tank, but nowadays a chosen yeast is added to gain control of what happens.
Of course, the process has gone from a small scale (in the Middle Ages, most peasants made their own beer at home), to production facilities like the one shown below from the 16th century (internet), to enormous industrial plants today. 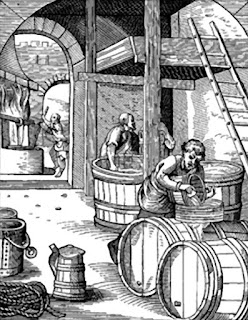 The barley is used in the form of malt, that is, grain that has been steeped in water to begin germination, during which enzymes develop and the starches stored in the grain start converting into sugars. The germination process is stopped by drying the grain with warm air, then “toasting” it to the desired degree for the kind of beer to be made. It is then called “malt.”
The hops are the flowers of the hop plant, and add both bitter flavor and stability to beer. For a number of years, the United States has been the leading hop producer in the world, followed by Germany and the Czech Republic. Today, American hop production is almost exclusively in Oregon and Washington states, but prior to World War II, Sonoma County in California was an important producer too (some hop kilns survive in that area; the hop flowers were dried in the kilns before shipment).
Where’s the railroad part of this? Obviously both malt and hops have to be shipped in bulk from where they are produced, to breweries. Malt is shipped in bulk to large customers, and can be moved in covered hoppers. Nowadays it usually is shipped in huge plastic bags, but not in the 1950s.
Hops are usually compressed into bales of about 200 pounds and burlap wrapped, and in the 1950s then shipped in insulated cars to keep it cool. Before insulated box cars, shipment was often in (un-iced) refrigerator cars, or, if in bulk, in covered hoppers.
I decided to model something to represent these shipments. One of the major Western malting companies was Great Western Malting, formed in 1934 as Prohibition was ending, by all the major Northwest breweries (Olympia, Rainier, Blitz-Weinhard) and some grain companies. The plant was located in Vancouver, Washington.
Until 1960, there was also a company called California Malting, in the City of Commerce (Southern California), just outside the city of Vernon, where I had a summer job at Alcoa during college. I well recall their towering silos, which I could see some blocks from where I worked. Here’s a detail of a photo looking northwest, from the Kelly-Holiday Aerial Photos collection at the Los Angeles Public Library; you can see quite a few railcars on the near side of the plant. At the right edge of the plant is Malt Avenue.

Hops are a somewhat fragile product and lose freshness readily. They are usually stored at low temperature, and preferably are protected from temperature in shipping. They would not be shipped in covered hoppers in most situations, except perhaps for very large customers. Nevertheless, awhile back (over 40 years ago, in fact) I created a covered hopper labeled for a hops cooperative. It’s actually an original Varney model, which is simply a hopper car that has had a roof with hatches added to it, and isn’t actually a prototype. Here that’s okay, since I didn’t use a prototype lettering scheme either. 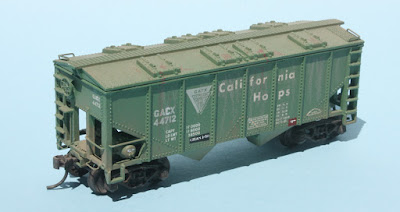 This model was actually described in the Model Railroader “Paint Shop” column in the issue for March 1982, page 128. I had replaced the cast-on roof corner grabs and side handrail grabs with wire, and added correctly sized and located AB brake gear. When General American first began to lease covered hoppers, their reporting marks were GATX, like tank cars, but were soon changed to GACX. I have modeled that change, implying that this was a very early GA lease car.
Both these covered hoppers operate in my mainline trains, but are not switched on the layout. However, there is another bulk-shipped product associated with brewing, which is the spent malt, after fermentation is completed. It is washed and dried, and is then valuable as animal feed; it can be composted to make fertilizer; and can be dried and used as fuel for the brewery’s energy needs. But that’s another post.
Tony Thompson
Posted by Tony Thompson at 12:55 PM