What can you say about John Allen?

Recently I was digging out an article from a Model Railroader (MR) issue of the 1950s, and happened to look at the Varney ad on the back cover. It took me right back. In those days, these rear-page ads were often built around John Allen photos of his layout. They were always interesting, and I know from speaking to lots of people who remember them, inspirational to many. I show an example below, and will comment. 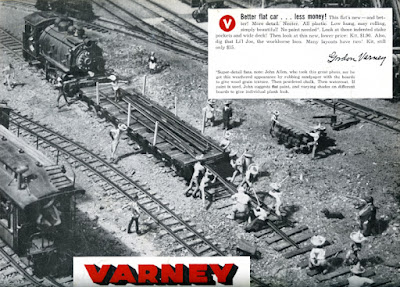 This was on the back of the September 1953 issue of MR. It was promoting the newly released Varney flat car, and of course one of Varney’s mainstay products, the Dockside 0-4-0.
Today, with many, many fine layouts around the country, it might be asked why this photo would be inspirational. The first reason is that the modeled area shown was completely scenicked, and also has quite a number of HO-scale figures. All you have to do is look at the layouts featured in MR in those days, or at the “Trackside Photos” section of each issue, to realize that this degree of completeness was pretty unusual. Secondly, it depicts a railroading scene, not just rolling stock, which of course was staged for the photo, but nevertheless dramatic. And third and not least, it’s an excellent photograph (Allen was a  professional photographer), and far beyond most of what was published in those days for layout photos.
But even before the Varney MR ads, which began in June 1952, Allen was already a familiar name and image to modelers, because his photographs had created an impact in the hobby. His professional ability to photograph under strong light, to make it look like daylight, and to choose low viewing angles, along with his use of realistic sky backdrops, made the photos a revelation in that era. I will just use a single example, from Allen’s “tabletop” period, before he had a layout. In the 1950s, this was one of the most familiar photographs in model railroading. (Used with permission. Years ago, Andy Sperandeo told me I could use some Allen photos for this blog.)

The figures, incidentally, were mostly made by John himself, using wax over a wire armature. And yes, that’s another photo including a Varney “Li’l Joe” Dockside.
This brings me to the point of Allen’s legacy. He died way back in 1973, so he has been gone a long time, but to older modelers, his memory is indelible. It is probably best captured in a Kalmbach book, assembled by Linn Westcott from Allen’s photos and with Allen’s own comments from many letters and articles. I show the cover below of the original 1981 edition. This was reprinted a few times, and eventually re-issued as a hardback in 1996. 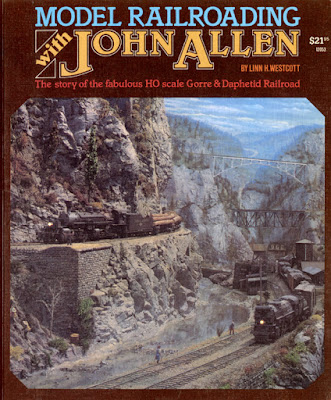 It has now even  been re-issued in an “expanded” edition by Benchmark Publications, in 2011 (with a few added photos). There also exists a DVD of visitors’ film clips. You can buy any of these items from on-line sellers.
In addition to his photos, the other matter that had made John famous was the engine house he submitted for the 1948 national model contest that MR used to run. It’s a marvelous structure, mostly made of cardstock with big windows and skylights for viewing the detailed and lighted interior, but it caused a stir (to put it mildly — you should read the letters to MR!) because John not only weathered it, but added bird droppings along the rooftop and model pigeons (though they are not in this photo). John was not the first to weather structures, but as a contest winner, this instance got a great deal of attention.

In this particular image, John added track and two figures that are O-scale in the foreground, to accentuate the perspective.
Something else that got a lot of attention directed to John was his whimsy, usually expressed on his narrow-gauge railroad rather than on the standard-gauge part of the layout. For example, he described the yard crew finding a stegosaur in the woods and pressing her into switching service. Allen said that she “wasn’t very smart but was obliging and very strong,” while having the further advantage that she could switch narrow-gauge and standard-gauge cars equally well. Unfortunately, she  never learned to use the ash pit. Here is Emma at work. 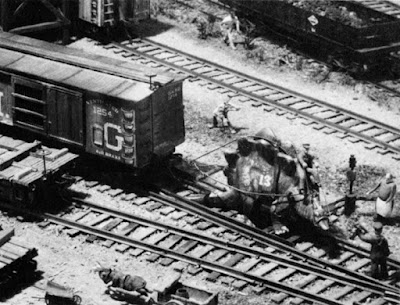 John liked to say that he had things like this on his layout, “because they amuse me, not because I don’t know better.”
Less recognized by most (though included in Westcott’s book) was Allen’s interest in prototypical operation. His operating sessions were well-known for his insistence that crews understand and use prototype procedures, long before most modelers even could have understood “operations” beyond the kind of session where “Joe, you run the passenger, and Stan, you follow him with the coal train,” or equivalent. Allen doesn’t often get credit on this front, but he was a true pioneer of realistic operation.
Now his nay-sayers will get exercised about what can be called his “caricature” scenery (including some mechanically dubious bridges), and certainly a lot of it was exaggerated. Also often raised is the issue of the dinosaur switcher and other foibles. But the idea of a completely scenicked layout, operated in a quite realistic way, was far beyond his own time. As I said, you have only to read MR issue from the 1960s and even into the 1970s, both the articles about layout visits and in the tell-tale “Trackside Photos,”  to know what I mean.
I guess on balance I have great respect for what Allen showed the hobby, about scenery, photography, and operation. He used heavy weathering of buildings and equipment when few did, built many fine structures and pieces of rolling stock, was a creative modeler, and explored scenery techniques long before most of his hobby. Yes, there is caricature in some of what he did, but for me, the positives deserve as much emphasis as the negatives.
Tony Thompson
Posted by Tony Thompson at 9:58 AM