“There should be something there.”

The simple sentence of the title  is one I often heard from my friend Richard Hendrickson, when we discussed modeling. What did he mean? He was referring to smaller details, things that weren’t major features of a model, but nevertheless could be noticed. (For anyone who doesn’t know or may not remember who Richard Hendrickson was, I wrote a memorial post about him, which is here: https://modelingthesp.blogspot.com/2014/07/in-memoriam-richard-hendrickson.html .)
One detail about which he used the sentence, was cast-on grab irons. He maintained that the lack of a separate, free-standing grab iron was secondary to the fact that there was a linear, three-dimensional object in the right location. I emphasize “right” because that was the key point about this principle. The viewer’s eye sees something in the right location and moves on — provided, of course, that it isn’t a major detail. And naturally, modelers may differ about which details are “major.”
Back in the day, before resin models or high-quality styrene models from InterMountain and others (not to mention Kadee, Tangent, or others that we have today), freight car modelers mostly had to start with the simplified products available in the Athearn “Blue Boxes,” and their equivalent from other manufacturers of the time. And these had cast-on grabs and ladders, not to mention seriously oversize sill steps.
I mention those details because they became a topic of genial disagreement between Richard and me. I invariably would carefully carve off the cast grab irons and install a wire replacement, but leave the sill steps because I wanted them to be durable. Richard, by contrast, would often leave a cast grab iron in place but without fail would replace the sill steps with metal parts, equally durable as the originals and far better looking. Here’s an example (you can click to enlarge if you wish): 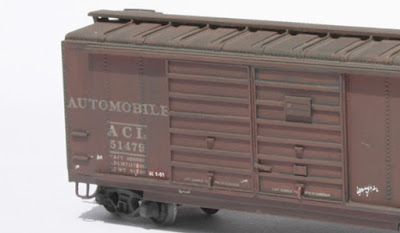 This is Richard’s conversion of a standard Athearn 40-foot box into a 40-foot auto car. In hindsight, I think I agree with him that the cast sill steps were more obvious than the cast grabs.
Of course there is no “right” answer here; the preferable decision was to replace both the grabs and the steps. And in later years, both Richard and I went back and completed the redetailing of most cars like this, so that eventually all had both wire grab irons and metal sill steps.
But the idea that “there should be something there” had gotten established in my mind, and I soon realized that Richard applied it in a whole bunch of areas. A dramatic one was repacking data. For those not sure what or where this is, I show below a photo detail. This car has had old repacking stencils painted out over some length, then the new one added just above the sill, right next to the ladder. 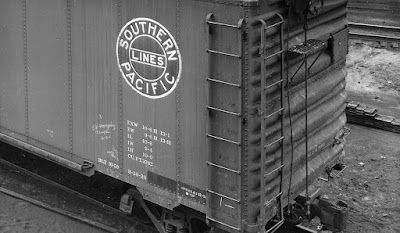 This car is SP Class B-50-28, photographed in the summer of 1952. (For background on what this repack data block describes, see my post here: https://modelingthesp.blogspot.com/2014/04/brake-service-rules-and-modeling.html .)
Here is another example, a T&NO car showing a very different appearance of a paint patch for application of repacking data. These two photos are probably the extremes of length and height of such paint patches, though prototype photos certainly show a very wide variety of such patches. The good news here is that the modeler is free to pretty much do what is convenient. (detail of Paul Dunn photo, Sheldon King collection)

Before there were decent decals of the 1-inch lettering used in repack stencils, it wasn’t clear what to do in representing “what should be there.” Richard for some years used N-scale dimensional data decals, cut to the right size and then applied upside down so there was no risk of reading them. Again, it would be nice to have “correct” lettering for repack data, but the most important aspect is that there be “something there.”
I recently replaced a terrible-looking running board on a friend’s model, not a great model but a rather ordinary commercial product. Rather than install wire corner grabs, I followed the principal of there being “something there” at the corners of the lateral running boards (the new boards are styrene strip). I used shaved-off corner grab moldings from old plastic running boards. It looked like this before painting. 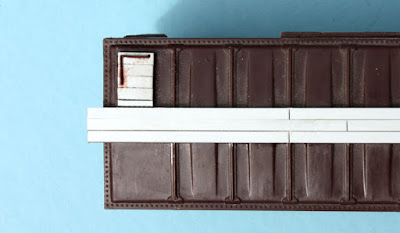 When painted, the intent is that the viewer’s eye will see something there at the corner, where there should be something.
I don’t advocate this kind of modeling in general, though there are times it may be appropriate. But just like Richard’s upside-down data decals, things like this are definitely better than having nothing there at all, and do most of the job of convincing the observer that where something is expected, indeed, there is “something there.” I’d bet that most modelers can extend these examples well beyond what I’ve described!
Tony Thompson
Posted by Tony Thompson at 12:08 PM