Most modelers are familiar with the fact that for many decades, most freight cars had to be reweighed periodically to ensure accurate light (or tare) weights, which in turn could be subtracted from the weight of a loaded car to obtain the net weight; the net of course would represent the weight of the cargo and be the basis for billing. I described this process in a short article for Railroad Model Craftsman in April 2011, but unfortunately there were some editorial problems with how it was presented, so I went back and created a corrected version, which was linked through my blog. You can access it, if you’re interested, at: http://modelingthesp.blogspot.com/2011/03/reweigh-article-from-rmc.html .
Truck journals also had to be repacked periodically, in the days before roller bearings, largely done on the basis of need, but with solid or plain journal bearings, this was done at intervals of a year or so. Like the reweigh date, the repack place and date was stenciled on the car. To illustrate, here is a photo of a Boston & Maine box car model (Sunshine kit 91.6, depicting the 1923 ARA box car design), and the contrasting paint color of the patches makes obvious the lettering for both the reweigh (left of the door) and repack (above the right bolster) application. One of the nice things about the Sunshine “reweigh data” decal sets is that they included repacking data blocks also, and the lettering on this model is from that source. You can click on the image to enlarge it if you wish. 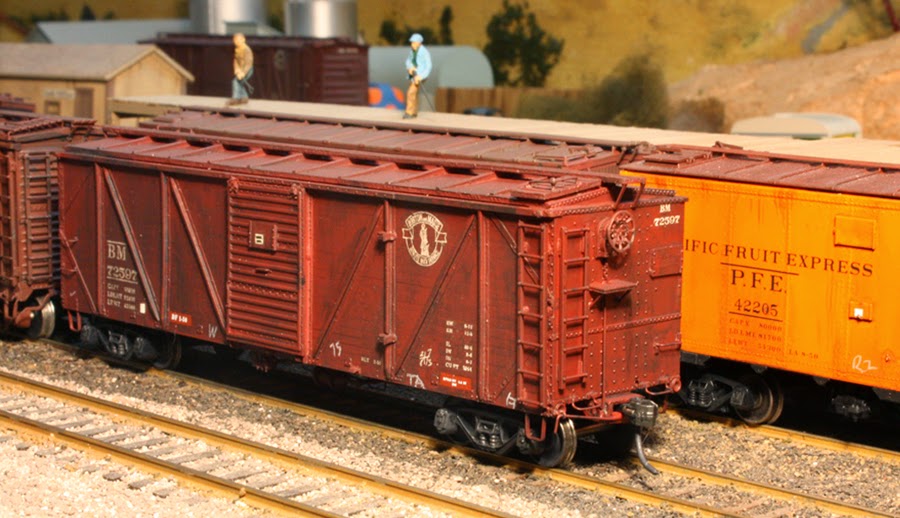 But this post is not particularly about either reweigh or repack stencils; I just mention them for completeness.
There was a third periodic service that was performed, to clean, oil and test (COT) the air brakes, then record the work with a stencil (S). Since 1972, this has been recorded on a COTS data block, but in earlier years it was stenciled right on the brake reservoir, or elsewhere on the car. But exactly how, and how often? I am indebted to Guy Wilber for supplying a summary of the rules on this point, and below I quote his comments in their entirety.

“Air brakes known as ‘AB’ brakes were required to be serviced every 36 months under the provisions of Interchange Rule 60. That service interval was a standard from 1934 until extended to 48 months by supplement to the 1958 Interchange Rules. In that period, ‘K’ brake systems were required to be serviced every 15 months. I would have to look up the exact date that the service increment was extended to 15 months, but early on, the interval for ‘K’ brakes was every 12 months. The 15-month interval was in effect from (at least) the early 1930s into 1953. All references to ‘K’ brakes were taken out of the Interchange Rules, effective January 1, 1960.
“Prior to servicing the brake system the stenciled data applied when cars were new, or after the last service date, was recorded by the current servicing railroad for use in billing the owning railroad. Once cleaned, oiled and tested; all old stenciling was to be scraped away, painted over, and new stencils were to be applied as such; railroad shop initials, date (m-d-yr) and the servicing railroad's reporting marks.
“Shop initials and the date was on the left side of the ‘AB’ combined reservoir and the RR reporting marks were on the right. The shop initials and date were stacked over the RR reporting marks if placed on the end of the reservoir, and they were stacked in the same manner on the smaller air reservoir of ‘K’ brakes.
“This was standard practice from the introduction of the ‘AB’ brake system through 1959. Stencils for brake components were 1 inch in height until 1938 when they were changed to 1-1/2 inches in height.
“Any brake application in which the reservoir was obscured by deep side sills generally had the COTS information stenciled on the side of the car where the reservoir was mounted and placed as closely to the air release rod as possible. It was also permitted to stencil the information on the center sill of tank cars as spillage of commodities often obscured the stenciling unless protected by cover shields.”


Anyone wishing to duplicate this kind of marking can readily do so, as I’ll explain below, even though most decal sets do not include any of the needed lettering. But remember these two points: first, the reservoir on many cars was not very visible, due to side sill configuration or reservoir location, so many models would not visibly benefit from brake service stenciling. Second, prototype photos often show the reservoir so dirty that the service stenciling cannot be seen, or only part of it is seen.
Tank cars are usually cars whose reservoirs are clearly visible (though sometimes they are mounted alongside the center sill). Here is an example of a very visible and stenciled reservoir, in a Bruce Petty photograph of an SP tank car in diesel fuel service. 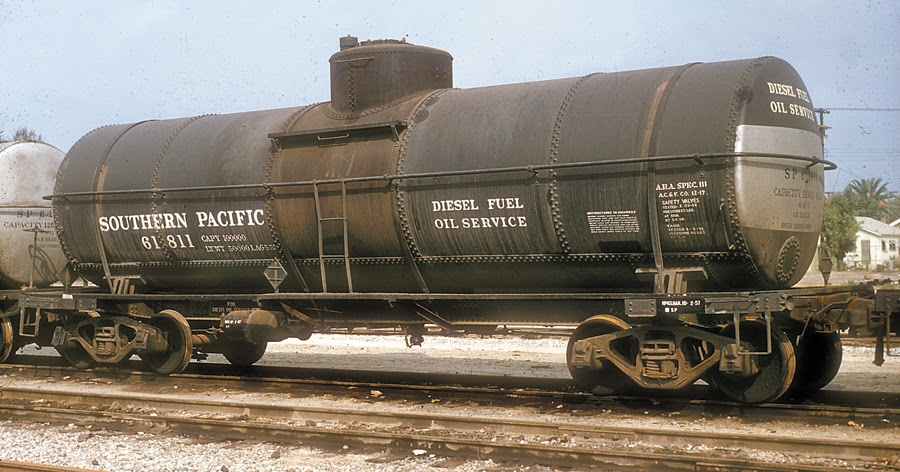 To show the reservoir better, here is a detail of the above photo. 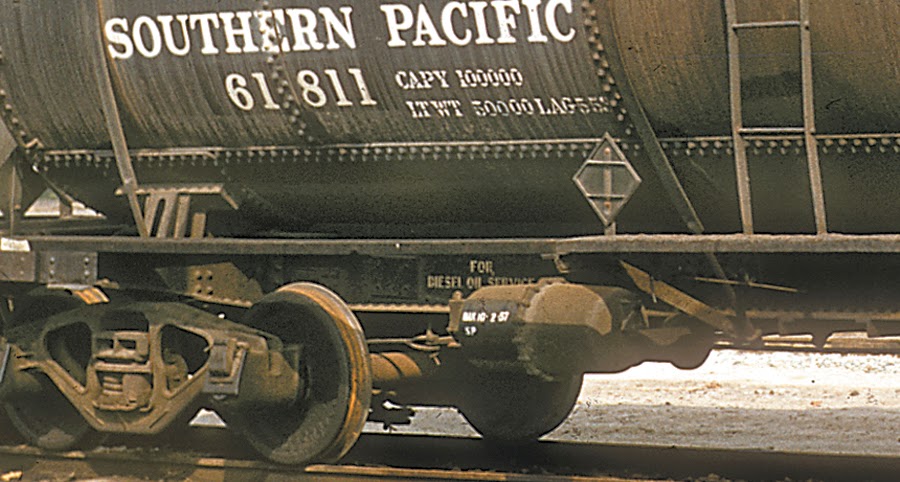 Note that the stenciling here is not consistent with the rules quoted above. The railroad initials are stacked below the shop initials and date, all on the left side of the reservoir. This arrangement is more like a repack stencil, which opens the door to simply using decals for repack stencils in this application. That’s what I meant by saying that modelers could “readily” apply this lettering.
In my own modeling, I have not decaled too many of my visible brake reservoirs, because in lots of prototype photos, this stencil simply doesn’t show up. The observation is logical because the car bottom is the dirtiest location, and no doubt dust and grime quickly covered the stencil on the reservoir. But I think it is good to have a few reservoirs visibly stenciled, and that is what I do, usually on tank cars. Remember that having some lettering in the right location is much more important to the overall impression than having the correct place or date in the decal. Here is one example.

This is my model of SP Class O-50-11, with circumferential rivet seams; it was described at: http://modelingthesp.blogspot.com/2012/10/modeling-sp-tank-cars-4-circumferential.html . The right side of the car, which has no dome walkway, is shown in this view.
One might say the brake service stenciling is such a minor item of lettering, that it is not worth including. But like many details, this is one which, when noticed, can give the impression that everything is well detailed. And if this kind of decal application causes me to be seen as a meticulous modeler, well, I’ll just have to live with that!
Tony Thompson
Posted by Tony Thompson at 10:11 AM