I have written in several places abut modeling SP’s 12,500-gallon tank cars from Athearn tank cars, most thoroughly in my revision of an older article originally published in the Southern Pacific Historical & Technical Society magazine, Trainline, issue 71 (Spring 2002). That issue is available from the Society on their website, at: http://www.sphtsstore.org/servlet/the-Trainline-back-issues/s/65/Categories , but my 2011 blog post with several updates and revisions is probably more useful at this point. That post can be accessed at this link: http://modelingthesp.blogspot.com/2011/05/modeling-sp-tank-cars.html .
Some years ago, I had assembled an Athearn model of one of the gasoline tank cars, but only did part of the needed improvements to the car body. Those included raising the dome height and correcting the safety valves, plus adding a vertical-staff hand brake and wire grab irons. But I was trying to save the lettering (this was before I had a set of decals), so the paint color (too yellow) and some other details were not corrected. Here is how it looked:

The most visible deficiency here is that the bottom sheet of the tank is black (a natural result of the Athearn division between tank top and bottom), but the prototype tanks were entirely yellow (actually the depot color, Colonial Yellow). The Athearn yellow is not the same as Colonial Yellow and ought to be corrected. And in saving the paint/lettering, I also had not removed the extraneous double rivet rows on each side of the dome. Since correct decals are now available (from my artwork, as described in a prior post, at: http://modelingthesp.blogspot.com/2011/05/sp-tank-car-decals.html ) I could now go ahead and make the various body corrections.
Another reason to reletter the entire car was so that I could correct the Athearn lettering size, which is generally too large, and also the Athearn car number, which belongs to Class O-50-13. I am not aware that any cars of that class were actually assigned to gasoline service; most were from Class O-50-12.
The first step was to disassemble the tank from the underframe, readily accomplished with Athearn tank cars. As you can see in the photo below, the car’s underframe had also been upgraded, adding brake piping and rodding. This is especially worthwhile in tank car models, because these additions are quite visible, more so than on, say, box cars. 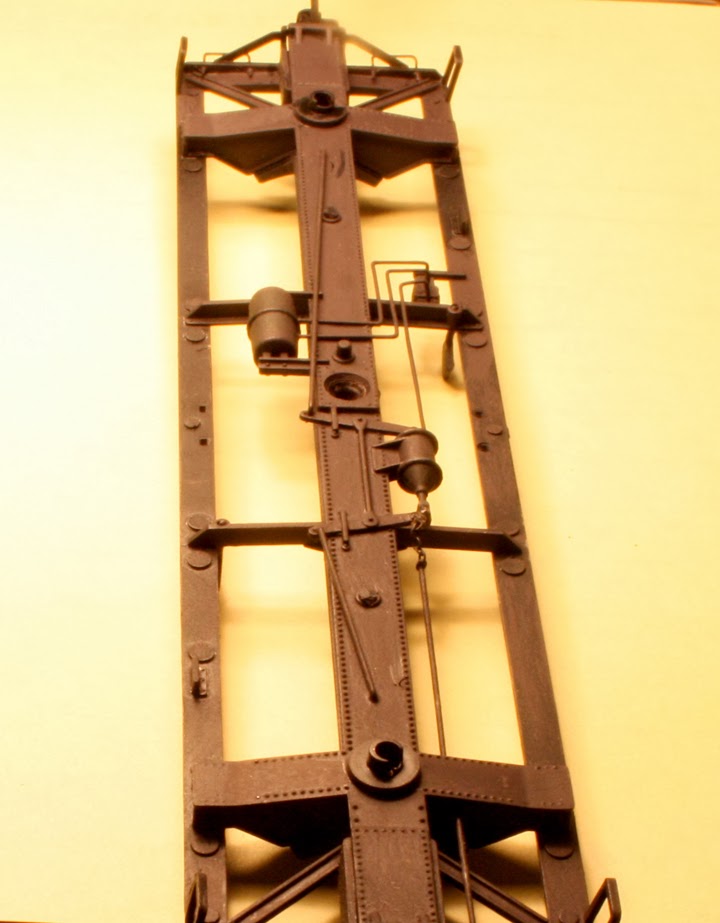 I began work on the tank by shaving off those incorrect rivet rows, and removing the extra dome platform on the right side of the car. (See my updated modeling post, cited at the end of the first paragraph of the present post, for specifics on these tasks.) Once the body was cleaned up, I airbrushed it with Tru-Color’s paint no. TCP-153, Colonial Yellow. This paint does airbrush beautifully and gives a smooth and slightly glossy surface for decals.

Shown here is the left side of the car, which has the dome walkway. I will re-use the Athearn handrail supports, even though they are oversize and not located at the same spacing as SP’s tank car handrails, because the black railing tends to draw attention away from the supports.
I mentioned my SP tank car decals above. The next step then was to letter the tank. I chose the railroad initials rather than the spelled-out road name introduced in 1946, because practically all photos of the yellow tank cars are in the pre-1946 scheme. Once lettered, the tank body looked like this, with a number chosen from Class O-50-12, which as I mentioned was the predominant class in gasoline service.

On the tank at this point, there is no reweigh date. Tank car cargoes were billed by gallonage, not by weight, so the car’s light weight was of no importance (unlike all other types of freight cars). Prototype photos commonly show tank cars having weigh dates a decade, or even multiple decades, prior to the photo date. But when cars were repaired, they were ordinarily reweighed, and SP tank cars often do show that change. Accordingly, I used the Sunshine PFE set of black reweigh and repack data to choose a 1942 reweigh date for this car.

Now the tank car was reassembled and weathering applied to everything. The final result, photographed on my layout in the same location as the original model at the top of this post (right across from the Ballard depot), shows the weathered yellow color, including the correctly yellow bottom sheet. 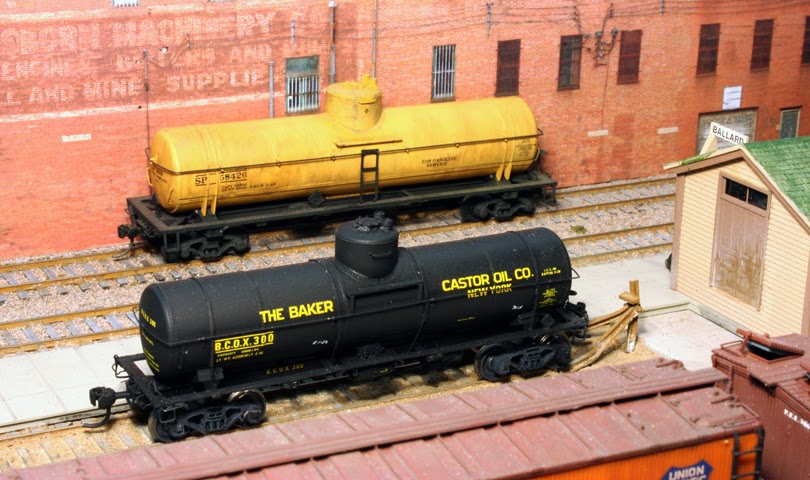 The foreground tank car, incidentally, is a Sunshine model of an 8000-gallon General American car with circumferential rivets, kit 99.3, built by Dennis Williams, and with decals that I applied, set BOCX-1 from Protocraft Decals. Protocraft emphasizes O scale, but they do have HO scale decals; you can see their on-line catalog at http://www.protocraft.com/category.cfm?Categoryid=36 .
The modeling work in this gasoline car upgrade has been described in more detail elsewhere (my prior post, cited in the first paragraph of this post), but the color choice and decal lettering seemed to sufficient interest to describe here. I can now operate this gasoline car without having to explain why it’s not accurately painted.
Tony Thompson
Posted by Tony Thompson at 9:25 AM